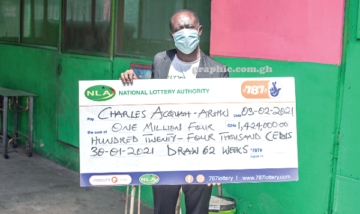 A marketer, Mr Charles Acquaah-Arhin, has won a GH¢1.42 million jackpot lottery of the National Lotteries Authority (NLA). The win, which also comes with a unique prize of GH¢20,000, is the highest jackpot break ever in the history of jackpot in Ghana.

Mr Acquaah-Arhin, a member of staff of the Graphic Communications Group Ltd (GCGL), won the jackpot last Saturday with a GH¢50 ticket.

He expressed shock as to how he was able to win such an amount of money with just GH¢50, indicating that it was the first time he had ever engaged in such a draw.

The 787-NLA jackpot, drawn weekly, is played on all mobile networks by dialling *787# and following the prompts to participate, with a minimum of GH¢5.

Mr Acquaah-Arhin, in tears of joy, shared his life-changing testimony with the Daily Graphic, saying: “This prize has come to transform not only my life but that of many.”

He danced in glory, testifying that “the game is real”.

Although he had not decided on how he intended to spend the money, he said he was going to make sure others also benefited from his fortune.