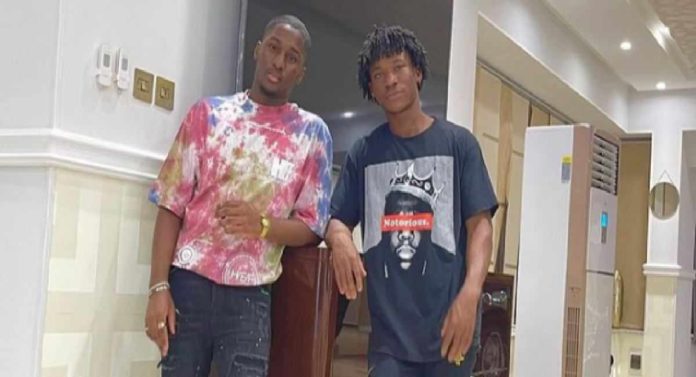 US-based award-winning Ghanaian actor, Abraham Attah has been spotted hanging out with Saahene Osei, the son of Ghanaian billionaire Kwame Despite.

The two were spotted in the company of young beautiful ladies as they spent quality time together in what appears to be one of Kwame Despite’s plush mansions.

Abraham Attah relocated to the United States in 2016 after he shot to fame with his first movie role in the movie ‘Beast of No Nation’.

The 19-year-old a few months ago announced his enrolment into Tufts University in Massachusetts to further his education and career in athletics.

Abraham Attah is currently in Ghana for a holiday vacation and has been captured in photos and videos having a good time with his new crop of rich friends.

Well, it looks like levels have changed for Abraham Attah as he has dumped the Ashaiman street boys he used to hang out with when he was spotted by the Director of the award-winning war-based movie, ‘Beast of no Nation’ which changed his life for good.

Photos sighted by GHPage.com on Saahene’s Instagram page see him and Abraham Attah striking a pose together for the camera. In another photo, Abraham Attah is seen with the rich kid showing him around his father’s million-dollar garage.

In a separate video, the two are seen partying with some pretty girls as they jam to music playing in the background.

Watch the video below.