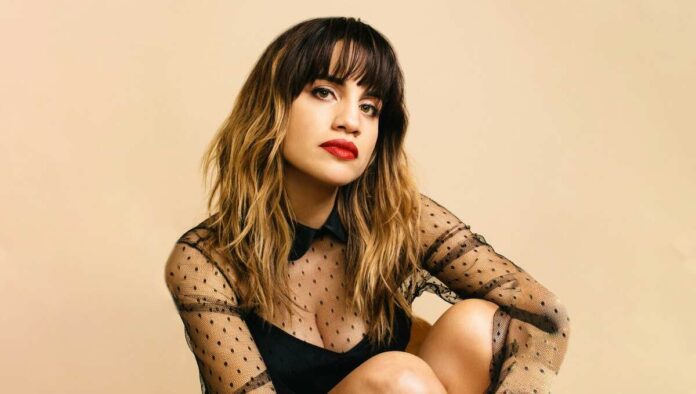 Natalie Morales is an American actress and director. She starred in the 2008 ABC Family series The Middleman and had a main role in 2009 on the first season of the USA Network series White Collar. In 2010, she appeared in the feature films Wall Street: Money Never Sleeps and Going the Distance.

Morales also had a starring role in the Fox comedy series The Grinder, the NBC sitcom Abby’s, and recurring roles in the NBC sitcom Parks and Recreation, HBO’s The Newsroom and the Netflix series Dead to Me. Her directorial debut film, the teen comedy Plan B, was released on May 28, 2021, on Hulu. She also directed Language Lessons, a film she co-wrote with Mark Duplass and stars in. It premiered at the Berlin International Film Festival and was released in September 2021.

Natalie Morales had a guest appearance on CSI: Miami in 2006, and played a character in Pimp My Ride that year, a video game version of the MTV television series. Her first major role was in The Middleman, a sci-fi dramedy that aired on the ABC Family network for one season.

Check Out: Christina Applegate net worth

She starred as Wendy Watson; the series was adapted from the comic book, The Middleman. Morales also starred in and executive-produced a Web series, titled Quitters. The series was an official selection of the 3rd annual ITVFest (Independent Television Festival) in Los Angeles in August 2008.

In 2009, Morales joined the cast of the USA Network television series White Collar for the first season. She portrayed Lauren Cruz, a junior FBI agent. In May 2010, after her dismissal from the White Collar cast, Morales began appearing as a regular in the NBC sitcom Parks and Recreation, appearing as Lucy, the girlfriend of Aziz Ansari’s character Tom Haverford and bartender at The Snakehole Lounge.

Actress Natalie Morales appeared in Oliver Stone’s 2010 film, Wall Street: Money Never Sleeps, a sequel to his 1987 film Wall Street. She was cast as Chelsea Handler’s best friend in Are You There, Chelsea? She left the series when the cast was replaced for creative reasons. Morales also appeared on Aaron Sorkin’s HBO drama, The Newsroom, guest-starring as Kaylee, the girlfriend of Dev Patel’s character, Neal.

In 2013, actress Morales joined the cast of Trophy Wife as Meg, Kate’s best friend. In 2015, she joined the cast of the Fox series The Grinder. In 2017, she appeared in some episodes of the NBC series Powerless. Natalie Morales appeared as Detective Anne Garcia in the Netflix horror comedy series Santa Clarita Diet.

Morales’s most recent television series is the NBC multi-camera sitcom Abby’s, created by Josh Malmuth and executive produced by Parks and Recreation creator Michael Schur. Their third series for the network premiered on March 28, 2019. Later that year, Morales was cast as Michelle in the second season of the Netflix black comedy series Dead to Me (2019).

In 2021, Actress Natalie Morales directed the teen comedy Plan B 2021 starring Victoria Moroles and Kuhoo Verma. The story revolves around two teens looking for the plan b pill after a night of a regrettable first sexual encounter. The film earned critical acclaim with critics praising Morales’ direction including Linda Holmes of NPR who wrote, “The creators and the cast deserve enormous credit for how deftly the broader comedy here is balanced with genuine fear and frustration, and how unexpectedly parts of the film unfold. A lot of it is somehow structurally familiar but specifically surprising.”

Check Out: Linda Cardellini net worth

Actress Natalie Morales also directed the drama film Language Lessons (2021) which she co-wrote with writer-director Mark Duplass. They both star in the feature, which they filmed during the COVID-19 pandemic. The film is set over Zoom as a Spanish teacher (Morales) communicates with her student (Duplass).

Katie Erbland, a critic of IndieWire praised actress Morales’ work on the film writing “Morales’ winning Language Lessons offers one of the best uses of the format yet, a ‘Zoom film’ that utilizes its constraints to craft an intimate, expressive two-hander, no fatigue in sight”. The film had its debut at the 71st Berlin International Film Festival in March of 2021 to positive reviews and was released in September 2021.

Is actress Natalie Morales married? She is currently not married and has no ex-husband or children. On June 30, 2017, Morales stated on social media that she identifies as queer. Morales uses she/they pronouns. When it comes to her weight and height, she stands at an appealing height of 1.71m and has a good body weight which suits her personality. As of 2022, The famous actress is not married but is in a private relationship.

How much is Natalie Morales (actress) worth? Natalie Morales (actress) net worth is estimated at around $4 million. Her main source of income is from her primary work as an actress and director. Natalie Morales’s salary per month and other career earnings are over $500,000 dollars annually. Her remarkable achievements have earned her some luxurious lifestyles and some fancy car trips. She is one of the richest and most influential actresses in the United States.