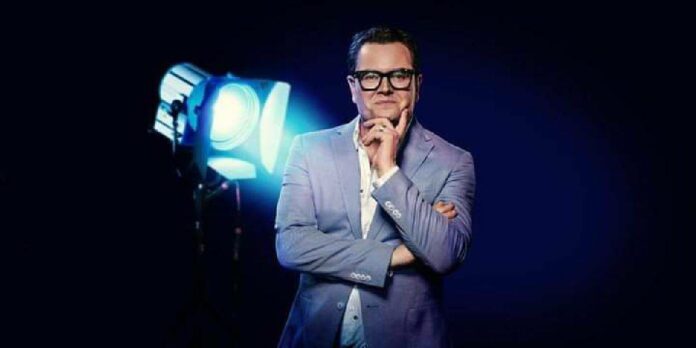 Alan Carr is an English comedian, broadcaster, and writer. His breakthrough was in 2001, winning the City Life Best Newcomer of the Year and the BBC New Comedy Awards. In the ensuing years, Carr’s career burgeoned on the Manchester comedy circuit before he became known for co-hosting The Friday Night Project (2006–2009) with Justin Lee Collins.

Alan Graham Carr was born June 14, 1976 (age 45 years) in Weymouth, United Kingdom. He spent most of his childhood in Northampton. His father, whose family comes from the North East of England, is former Northampton Town manager and Newcastle United chief scout Graham Carr. Carr has a younger brother, Gary.

Carr went to Weston Favell School, Northampton, and graduated from Middlesex University with a 2:1 BA (Hons) degree in Drama and Theatre Studies. After completing his degree in his early 20s, Carr moved to Manchester, seeking a better life and aspiring to be a comedian. He moved into a house in Chorlton-cum-Hardy after which he moved to Stretford; which he cites as an inspiration for his comedic work.

Check Out: Romesh Ranganathan net worth

Alan Carr made his radio presenting debut on Christmas Day 2007 for BBC Radio 2 as part of their Festive Highlights with the show Alan Carr’s Christmas Box. He filled in on BBC Radio 6 Music on 16 February and 14 June 2008 for Adam and Joe and co-presented The Russell Brand Show on 4 October 2008. He also presented Alan Carr’s Comedy Outings for BBC Radio 2 in 2008.

On 25 April 2009, Carr began hosting Going Out with Alan Carr, a new show for BBC Radio 2, in conjunction with Emma Forbes (later replaced by Melanie Sykes). The show was broadcast every Saturday evening from 6 pm to 8 pm. On 8 March 2012, he announced that he made the decision to leave to focus on his Chatty Man show. His last show was on 31 March 2012. Carr was replaced by Liza Tarbuck. He returned on Boxing Day 2015 for a one-off show on the station.

For four weeks in January/February 2017, Carr again returned to BBC Radio 2 to sit in for Paul O’Grady on his Sunday show. Carr reunited with Sykes to present a 10-week show called ‘Summer Escapes’ sitting in for Graham Norton on Saturdays from July to September on BBC Radio 2 yearly from 2017 until its final run in 2020 following Norton’s departure from the station. It included features based around summer including the ‘British Seaside Survey’.

Carr performs stand-up regularly, on tour, and on television. He has been featured in three Edinburgh shows and in 2007 he toured throughout the UK, which was followed by a DVD entitled Tooth Fairy Live. Carr had his own monthly show in a Manchester comedy club and he has toured nationwide, supporting other acts. He has performed at the Apollo Theatre in London, which was televised for the BBC One series Live at the Apollo, and has been featured in the Royal Variety Performance.

He has appeared and performed at many festivals, including the Reading and Leeds Festivals, Latitude Festival, and Kilkenny Comedy Festival. He has performed stand-up internationally, including an appearance at the Montreal “Just For Laughs” festival.

When accepting his award for Best Entertainment Personality at the British Comedy Awards in December 2008, Carr dedicated it to Karen Matthews, who had earlier that month been found guilty of kidnapping Shannon Matthews, her own daughter. Carr was quoted by BBC News as stating: “I should dedicate this award to her [Karen]. She would be my dream guest. I think she’s a gay icon. People like a bit of rough, don’t they?”.

Shahid Malik, MP for Matthews’ constituency of Dewsbury, described Carr’s comments about Matthews as “sick and insensitive”. Carr subsequently apologized for his comments, saying “I realize what I said was insensitive and I am very sorry for any offense caused.” On his own website, he added: “For those of you who have enjoyed my comedy and seen my act over the last seven years you all would have got used to my tongue in cheek style and near the knuckle observations. Last night at the Comedy Awards […] I was being ironic, these aren’t my real sentiments obviously.”

In January 2018, Carr married his partner of ten years, Paul Drayton, in Los Angeles. The wedding was officiated by his best friend Adele. Carr and Drayton currently reside in Aldington, Kent, having moved from London.

How much is Alan Carr worth? Alan Carr net worth is estimated at around $10.5 million. His main source of income is from his comedy career. He is one of the richest and influential comedians in the United Kingdom. However, in 2021, Carr returned to BBC Radio 2 without Sykes to sit in for Zoe Ball on “The Zoe Ball Breakfast Show”.