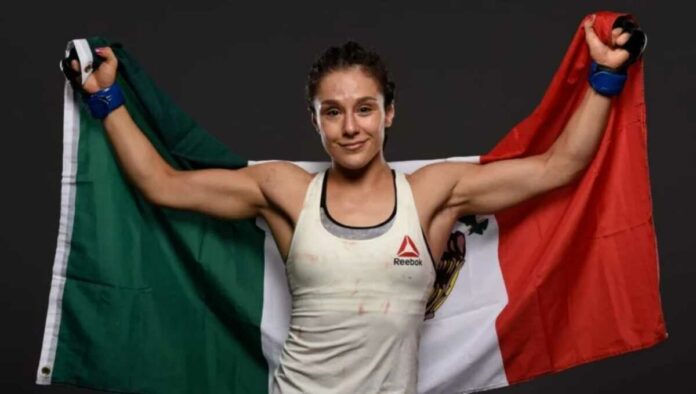 Alexa Grasso is a Mexican mixed martial artist who competes in the flyweight division. She is currently signed with the Ultimate Fighting Championship (UFC). As of March 29, 2022, she is #5 in the UFC women’s flyweight rankings.

Karen Alexa Grasso Montes was born on August 9, 1993 (age 28 years) in Guadalajara, Mexico. She daughter of Mexican parents and was raised along with her siblings. Grasso stands at an appealing height of 1.65m and has a good body weight of 56.9kg which suits her personality.

Alexa Grasso made her professional MMA debut in December 2012 in her native Mexico. During the first eighteen months of her career, she amassed an undefeated record of 5 wins (3 by TKO, 2 by decision) and 0 losses. After taking a year away from the sport, Grasso made her Invicta FC debut on September 6, 2014, against Ashley Cummins at Invicta FC 8.

Check Out: Molly McCann net worth

She next faced Mizuki Inoue on February 27, 2015, in the co-main event at Invicta FC 11. She won the fight by unanimous decision. The bout also earned Grasso her first Fight of the Night bonus award. Grasso was expected to challenge Livia Renata Souza for the Invicta Strawweight Title at Invicta FC 14 on 12 September 2015 but was forced to withdraw due to injury.

On August 11, 2016, it was announced that Alexa Grasso had signed with the Ultimate Fighting Championship (UFC). She faced Heather Jo Clark on November 5, 2016, at The Ultimate Fighter Latin America 3 Finale: dos Anjos vs. Ferguson in Mexico City, Mexico. She won the fight by unanimous decision.

Alexa Grasso next faced Felice Herrig on February 4, 2017, at UFC Fight Night 104. She lost the fight by unanimous decision, marking the first defeat in her professional career. On August 5, 2017, Grasso faced Randa Markos at UFC Fight Night: Pettis vs. Moreno.

Grasso suffered from a urinary tract infection and was medically advised to stop cutting weight and be placed on antibiotics, as a result, she came in at 119 lbs, three pounds over the strawweight limit and was fined 20% of her purse that went to Markos. The bout proceeded at a catchweight. Grasso won the fight via split decision.

Alexa Grasso was expected to face Marina Rodriguez on February 2, 2019, at UFC Fight Night 144. However, it was reported on December 17, 2018, that Rodriguez pulled out of the event due to a hand injury. The pair was rescheduled to UFC on ESPN 2. However, on March 22, 2019, it was reported Grasso was injured and she was replaced by Jessica Aguilar.

Grasso faced Karolina Kowalkiewicz on June 8, 2019 at UFC 238. She won the fight by unanimous decision. Grasso faced Carla Esparza on September 21, 2019, at UFC on ESPN+ 17. She lost the fight by majority decision. This fight earns her the Fight of the Night award.

She was scheduled to face Cláudia Gadelha on January 18, 2020, at UFC 246. However, on the day of the weigh-ins, Grasso weighed in at 121.5, 5.5 pounds over the non-title strawweight limit of 116 lbs. The NSAC decided to remove the fight because competitors are not allowed to compete if the weight between them is over 3 pounds. In a statement released just hours after the weigh-ins, Grasso apologized for missing weight, and declared she will now be fighting at flyweight.

Grasso was scheduled to face Ji Yeon Kim on June 27, 2020, at UFC on ESPN: Poirier vs. Hooker. However, due to travel restrictions for both fighters due to COVID-19 pandemic, the bout was rescheduled for August 29, 2020, at UFC Fight Night 175. She won the fight via unanimous decision.

Check Out: Ariane Lipski net worth

Alexa Grasso faced Maycee Barber on February 13, 2021, at UFC 258. She won the fight via unanimous decision. Grasso was scheduled to face Joanne Wood on November 20, 2021, at UFC Fight Night 198. However, Grasso was forced to pull out from the event due to injury and she was replaced by Taila Santos.

Grasso was expected to face Viviane Araújo on January 22, 2022 at UFC 270. However, Araújo was forced to pull out from the event due to injury, and the bout was cancelled. Grasso faced Joanne Wood in a re-scheduled bout on March 26, 2022, at UFC on ESPN 33. She won the fight via a rear-naked choke in the first round. Grasso is rescheduled to face Viviane Araújo on August 13, 2022, at UFC on ESPN 41.

Alexa Grasso is rumored to be in a relationship with Yair Rodrigue who is a Mexican professional mixed martial artist. He currently competes in the Featherweight division in the Ultimate Fighting Championship (UFC). Rodríguez has been with the UFC since 2014 after winning The Ultimate Fighter: Latin America tournament. As of July 18, 2022, he is #2 in the UFC featherweight rankings. As of mid-2022, Alexa Grasso is not married and has no husband or kids.