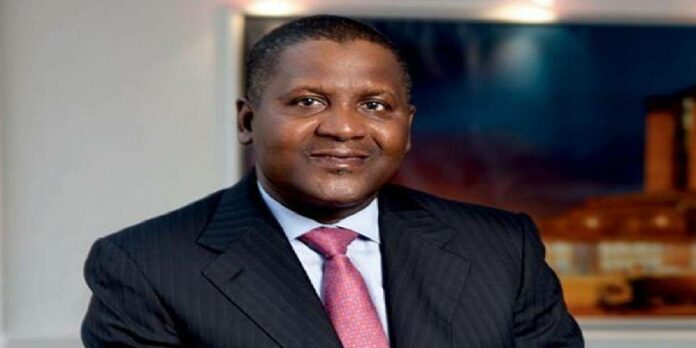 Read the complete write-up of Aliko Dangote net worth, age, height, parents, family, wife, children, Dangote Group as well as other information you need to know.

Aliko Dangote is a Nigerian business magnate. He is the chairman and CEO of Dangote Group, an industrial conglomerate and the wealthiest person in Africa, with an estimated net worth of US$12.4 billion as of September 2021.

Aliko Dangote GCON was born on April 10, 1957 (age 64 years) in Kano, Nigeria. His ethnicity is Hausa and he comes from a Muslim wealthy family. He is the son of Mohammed Dangote (father) and his mother Mariya Sanusi Dantata, the daughter of Sanusi Dantata. He is the great-grandson of Alhassan Dantata, the richest West African at the time of his death in 1955.

Dangote was educated at the Sheikh Ali Kumasi Madrasa, followed by Capital High School, Kano. In his early life, he has said: I can remember when I was in primary school, I would go and buy cartons of sweets [candy] and I would start selling them just to make money. I was so interested in business, even at that time.

Aliko Dangote graduated from the Government College, Birnin Kudu in 1978. He received a bachelor’s degree in business studies and administration from Al-Azhar University, Cairo, Egypt.

Aliko Dangote started The Dangote Group as a small trading firm in 1977, the same year Dangote relocated to Lagos to expand the company. Today, it is a multi trillion-naira conglomerate with many of its operations in Benin, Ghana, Nigeria, Zambia and Togo. Dangote has expanded to cover food processing, cement manufacturing, and freight.

The Dangote Group also dominates the sugar market in Nigeria and is a major supplier to the country’s soft drink companies, breweries, and confectioners. The Dangote Group has moved from being a trading company to be the largest industrial group in Nigeria including Dangote Sugar Refinery, Dangote Cement, and Dangote Flour.

In July 2012, Dangote approached the Nigerian Ports Authority to lease an abandoned piece of land at the Apapa Port, which was approved. He later built facilities for his flour company there. In the 1990s, he approached the Central Bank of Nigeria with the idea that it would be cheaper for the bank to allow his transport company to manage their fleet of staff buses, a proposal that was also approved.

He also donated money to the Nigeria sports ministry to renovate the national stadium, Abuja.

In Nigeria today, Dangote Group with its dominance in the sugar market and refinery business is the main supplier (70 per cent of the market) to the country’s soft drinks companies, breweries and confectioners. It is the largest refinery in Africa and the third-largest in the world, producing 800,000 tonnes of sugar annually. Dangote Group owns salt factories and flour mills and is a major importer of rice, fish, pasta, cement, and fertiliser.

The company exports cotton, cashew nuts, cocoa, sesame seeds, and ginger to several countries. It also has major investments in real estate, banking, transport, textiles, oil, and gas. The company employs more than 11,000 people and is the largest industrial conglomerate in West Africa.

Dangote has diversified into telecommunications and has started building 14,000 kilometres of fibre optic cables to supply the whole of Nigeria. As a result, Dangote was honoured in January 2009 as the leading provider of employment in the Nigerian construction industry.

He has said, “Let me tell you this and I want to really emphasise it … nothing is going to help Nigeria like Nigerians bringing back their money. If you give me $5 billion today, I will invest everything here in Nigeria. Let us put our heads together and work.”

Dangote had a prominent role in the funding of Olusegun Obasanjo’s re-election bid in 2003, to which he gave over N200 million (US$2 million). He contributed N50 million (US$500 thousand) to the National Mosque under the aegis of “Friends of Obasanjo and Atiku”.

He contributed N200 million to the Presidential Library. These highly controversial gifts to members of the ruling PDP party have generated significant concerns despite highly publicized anti-corruption drives during Obasanjo’s second term.

Dangote reportedly added $9.2 billion to his personal wealth in 2013, according to the Bloomberg Billionaires Index, making him the thirtieth-richest person in the world at the time, and the richest person in Africa.

Aliko Dangote, as well as Femi Otedola, promised to give the Super Eagles of Nigeria US$75,000 for every goal scored in the Africans Cup of Nations (AFCON) 2019. He is also an avid enthusiast of Arsenal F.C. in England and has shown interest in buying it.

Aliko Dangote was awarded Nigeria’s second-highest honour, the Grand Commander of the Order of the Niger (GCON) by the former president, Goodluck Jonathan.

In 2014, he was listed CNBC’s “Top 25 Businessmen in the World” who changed and shaped the century.

In April 2014, Time magazine listed him among its 100 most influential people in the world.

In October 2015, Dangote was listed among “50 Most Influential Individuals in the World” by Bloomberg Markets.

He won the “2016 African Business Leader Award”, organized by the Africa-America Institute (AAI).

Check Out: Patrice Motsepe net worth

Aliko Dangote sits on the board of the Corporate Council on Africa and is a member of the steering committee of the United Nations Secretary-General’s Global Education First Initiative, the Clinton Global Initiative and the International Business Council of the World Economic Forum. He was named co-chair of the US-Africa Business Center, in September 2016, by the US Chamber of Commerce. In April 2017, he joined the board of directors of the Clinton Health Access Initiative. He is also on the board of One Campaign.

Aliko Dangote is currently single. He has been married and divorced twice. He has three daughters – Mariya, Halima, Fatimah – and one adopted son Abdulrahman Fasasi. Dangote lives in a private house in Lagos, Nigeria.

How much is Aliko Dangote worth? Aliko Dangote net worth is estimated at around $13.6 billion. His main source of income is from his private investments under the Dangote Group holdings. Dangote’s successful career has earned him some luxurious lifestyles and some fancy cars. He is one of the African richest people to own a private jet. As of 2021. Aliko Dangote is the richest man in Africa.

08/02/2021
ABOUT US
Our Motive is to provide reliable, accurate and timely news to you. We're social, connect with us: The Urban and Rural at heart ❤️
Contact us: [email protected]
FOLLOW US
© Apumone 2021 All Rights Reserved