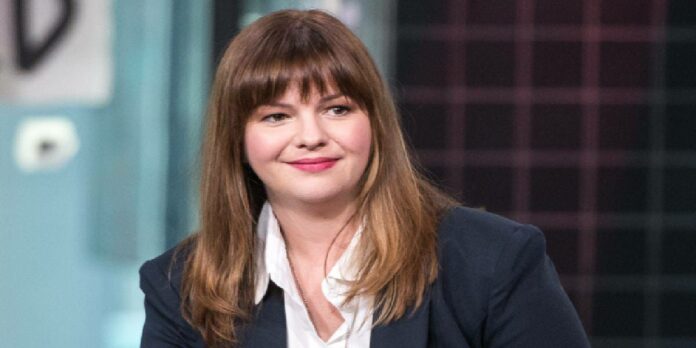 Amber Tamblyn is an American actress, writer, and director. She first came to national attention in her role on the soap opera General Hospital as Emily Quartermaine, followed by a starring role on the prime-time series Joan of Arcadia, portraying the title character, Joan Girardi, for which she received Primetime Emmy and Golden Globe nominations.

Tamblyn feature film work includes roles such as Tibby Rollins from the first two The Sisterhood of the Traveling Pants films (2005–2008), as well as Katie Embry in The Ring (2002), Aubrey Davis in The Grudge 2 (2006) and Megan McBride in 127 Hours (2010); she had an extended arc as Martha M. Masters in the medical drama series House. She also had a starring role as Jenny on seasons eleven and twelve of the CBS sitcom Two and a Half Men.

Amber Rose Tamblyn was born on May 14, 1983 (age 38 years) in Santa Monica, California, United States. Her father, Russ Tamblyn, is an actor, dancer, and singer who starred in the 1961 film West Side Story, the 1954 film Seven Brides for Seven Brothers and the television series Twin Peaks, and her mother, Bonnie Murray, is a singer, teacher, and artist. Her paternal grandfather, Eddie Tamblyn, was a vaudeville performer. Her uncle is Larry Tamblyn, who is the keyboardist in the 1960s rock band The Standells.

She attended the Santa Monica Alternative School House, which, in her words, was “very unorthodox, no letter grades”. At the age of ten, she played Pippi Longstocking in a school play; her father’s agent, Sharon Debord, was attending as a family friend and ended up convincing her father to allow Tamblyn to go on auditions.

Amber Tamblyn’s first TV role was Emily Bowen (later known as Emily Quartermaine) on the soap opera General Hospital, a role that she played for six years (from 1995 to 2001). She also starred in “Evergreen”, the pilot episode of the second The Twilight Zone revival in 2002. Tamblyn became better known for playing Joan Girardi, a teenage girl who receives frequent visits from God, on the CBS drama series Joan of Arcadia. Tamblyn’s father made several appearances as God in the form of a dog walker on the show, which ran from 2003 to 2005.

Early guest-starring roles include Buffy the Vampire Slayer (playing Janice Penshaw, the best friend of Dawn Summers), Boston Public, CSI: Miami, and Punk’d, where Ashton Kutcher and his crew members tricked her into losing someone else’s dog. In 2007, she starred in the CBS pilot for Babylon Fields, an apocalyptic comedic drama about the undead trying to resume their former lives. The CBS network excluded the show from its fall programming lineup since it would have competed with the network’s other undead-themed drama, Moonlight.

Check Out: Blake Lively net worth

Amber Tamblyn starred in The Unusuals, as NYPD homicide detective Casey Shraeger in spring 2009. The show was cancelled after its first season. In the same year, she had a recurring role alongside her eventual husband David Cross in the IFC sitcom The Increasingly Poor Decisions of Todd Margaret.

From November 2010 until April 2011, she starred as medical student Martha M. Masters in the seventh season of the Fox medical drama series House. She returned for the series finale in 2012.

In August 2013, Tamblyn was cast as Charlie Harper’s long-lost (and previously unknown) lesbian daughter, Jenny, on the sitcom Two and a Half Men, opposite Ashton Kutcher and Jon Cryer. Her first appearance was on the season 11 opener, September 26, 2013.

She has appeared on numerous episodes of Comedy Central’s Inside Amy Schumer, including the “Milk Milk Lemonade” sketch which aired in 2015. She has also guest-starred on IFC’s Portlandia and Comedy Bang! Bang!, as well as numerous shows on Adult Swim, including The Heart, She Holler opposite Patton Oswalt and Metalocalypse.

Amber Tamblyn launched her film career playing bit parts in her father’s movies: Rebellious and Johnny Mysto: Boy Wizard. She also appeared in 1995’s Live Nude Girls. Her first major film role was in 2005’s The Sisterhood of the Traveling Pants as Tibby Rollins, co-starring Alexis Bledel, America Ferrera, and Blake Lively. She reprised the role in the 2008 sequel, The Sisterhood of the Traveling Pants 2.

Her horror film career began with the opening scene of 2002’s The Ring. Tamblyn also appeared in the Japan-set The Grudge 2. The film, which also stars Sarah Michelle Gellar, was released on October 13, 2006, and debuted in the #1 spot at the North American box office. In August 2010, she won the Bronze Leopard at the Locarno International Film Festival for her performance in the title role of Stephanie Daley. The film, which also won an award at the 2006 Sundance Film Festival, features Tamblyn as a 16-year-old who kills her baby moments after giving birth in the bathroom of a ski resort. She was also nominated for Best Actress at the Independent Spirit Awards. The film also stars Tilda Swinton and Timothy Hutton.

In January 2008, Tamblyn appeared in the Hallmark film The Russell Girl, about a woman suffering from disease and mental anguish. Also in 2008, She also starred in Blackout. She appeared in the 2009 film Spring Breakdown, also featuring Amy Poehler, Rachel Dratch, and Parker Posey. Tamblyn appeared alongside Orlando Bloom, Colin Firth, and Patricia Clarkson in the 2010 film Main Street, a drama set in North Carolina. That year, she also had a role in the drama 127 Hours, with James Franco.

In 2012, Tamblyn starred alongside Wes Bentley and Vincent Piazza in the indie feature 3 Nights in the Desert directed by Gabriel Cowan, written by playwright Adam Chanzit and produced by John Suits. In 2015, she starred opposite Bob Odenkirk in the Netflix original film, Girlfriend’s Day.

Amber Tamblyn attended a grade school for the theatrical arts from the age of 5 to 14. She was discovered as an actress at the age of 9 when she starred in Pippi Longstocking. In 2014, she originated the role of Daisy Domergue for the live reading at the Ace Theater in Los Angeles of Quentin Tarantino’s The Hateful Eight. She was handpicked by Tarantino, a long-time friend, along with fellow cast members Samuel L. Jackson, Kurt Russell, and others. Tamblyn starred in Neil LaBute’s Reasons to Be Pretty at the Geffen Playhouse in 2014, which received critical acclaim.

Tamblyn has self-published two chapbooks of poetry, Of the Dawn and Plenty of Ships, and has participated in poetry readings at various venues, particularly in California. The Loneliest, a poem book inspired by Thelonious Monk and his music, was published in 2005 and contains haiku poetry written by Tamblyn and coupled with collages by George Herms. Only 300 copies of the book were published.

In 2005, Simon & Schuster Children’s Publishing published her debut book of poems, written between the ages of 11 and 21, entitled Free Stallion. The School Library Journal’s review states that “Free Stallion is a compilation of poetry that amounts to a portrait of the artist as a teenager… Many of the selections are appropriately self-absorbed but move beyond journalistic catharsis to real insight and stunning language for one so young.” Poet Laureate Lawrence Ferlinghetti called the book, “A fine, fruitful gestation of throbbingly nascent sexuality, awakened in a young new language.” Tamblyn has toured extensively with poet Derrick C. Brown, including the Lazers of Sexcellence tours. In 2008, she was featured in the Write Bloody Publishing anthology, The Last American Valentine: Illustrated Poems to Seduce and Destroy.

Tamblyn appeared in a poetry concert film recorded on August 4, 2002, in Los Angeles, The Drums Inside Your Chest. A new collection of poetry, Bang Ditto, was published in September 2009 by San Francisco’s Manic D Press. Beginning in October 2009, she began blogging for the Poetry Foundation’s blog, Harriet. Her poem “Bridgette Anderson” was one of the poems featured in Saul Williams’ book Chorus, published by MTV Books in September 2011.

She co-founded the Write Now Poetry Society in 2007, dedicated to creating unique and quality poetry programming. The non-profit has a long history with The Getty Museum, curating poetry events in conjunction with art openings, such as 2011’s Dark Blushing, featuring new poems commissioned by poets Patricia Smith and NEA fellow Jeffrey McDaniel, based on works of art by Dante Gabriel Rossetti and William Blake. Since 2011, Tamblyn has reviewed books of poetry by women for the iconic feminist magazine, BUST Magazine.

In 2014, Tamblyn sold her third collection of poems, Dark Sparkler, to Harper Collins. The book explores the lives and deaths of child star actresses. Tamblyn was quoted as saying the book’s subject matter was very difficult to write and took over 6 years to complete. The book also features portrait art of the women by film director and artist David Lynch and musician and artist Marilyn Manson.

Amber Tamblyn supported and campaigned for Hillary Clinton during the 2016 United States presidential election. She is one of the founders of the non-profit organization Time’s Up, which was created to combat workplace sexual harassment. She is also a feminist.

In a series of September 2017 tweets later reiterated in an open letter published in Teen Vogue, she said that actor James Woods tried to seduce her and a friend at a restaurant and offered to take them to Las Vegas when both Tamblyn and her friend were 16.

In June 2021, Tamblyn wrote an essay in The New York Times expressing solidarity with Britney Spears’ effort to end the conservatorship controlling her life. Tamblyn wrote that she became financially successful when she turned 21 and starred in Joan of Arcadia. Her father became her co-manager, and her mother her business manager.

She wrote that having her parents on the payroll damaged their relationship, that she was “everybody’s A.T.M.” and that her money “paid for our vacations, dinners out, and sometimes even the bills. When it finally came time to disentangle our personal and professional relationships, it was deeply painful for all three of us.”

Amber Tamblyn is married to his longtime boyfriend David Cross, they had their wedding in 2012. Amber and her husband actor-comedian David Cross became engaged in August 2011 and married on October 6, 2012. On February 21, 2017, Tamblyn announced that she and Cross had recently had a daughter, Marlow Alice Cross.

Tamblyn is sometimes said to be the goddaughter of musician Neil Young and actors Dean Stockwell and Dennis Hopper, although, in a 2009 interview with Parade, Tamblyn explained that “godfather” was “just a loose term” for Stockwell, Hopper and Young, three famous friends of her father’s who were always around the house when she was growing up, and who were big influences on her life.

How much is Amber Tamblyn worth? Amber Tamblyn net worth is estimated at around $5 million. Her main source of income is from her career as an actress, writer and director. Tamblyn successful career has earned her some luxurious lifestyles and some fancy cars trips. She is one of the richest and influential actresses in the United States. However, Amber Tamblyn’s first novel, Any Man, was released in June 2018. Its plot centres on a serial female rapist who preys on men. Her second book, a memoir and feminist manifesto titled Era of Ignition, was released in March 2019. The book is a personal exploration of feminism during divisive times.