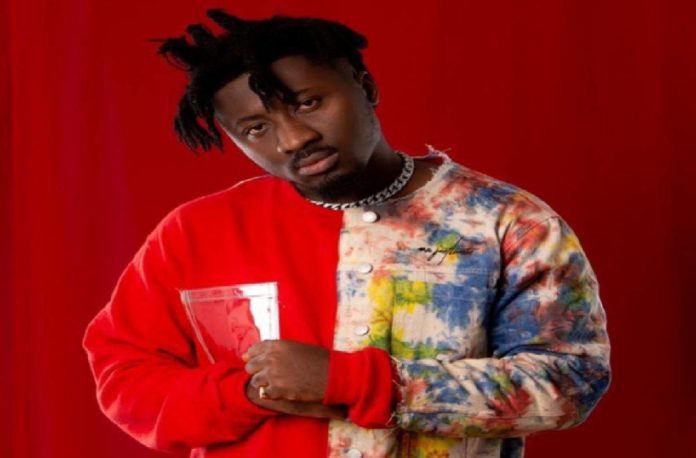 Read the complete write-up of Amerado net worth, age, height, songs, awards, biography as well as other information you need to know.

Amerado is a Ghanaian rapper from Kumasi. He is the curator of Ghana’s first ever newscasting rap series called Yeete Nsem.

Amerado who real name is Derrick Sarfo Kantanka was born on February 14, 1995(age 26 years) in Ejisu, Kumasi in the Ashanti Region of Ghana.

Amerado started his career when he was discovered by Azee Ntwene in 2015 as he emerged third at the Solid FM Freestyle Show to join fellow rapper Strongman Burner at  MicBurnerz Music.

He was summoned to feature on the GH Youth All Stars hosted by Mix Master Garzy to compose the official peace song for the 2016 general elections held in Ghana.

In 2017, Amerado released his lead single “I AM” which announced his presence in the music industry in Ghana. The song was rated 3rd in the Top 10 Ghanaian songs of January 2017 listed by Pulse Ghana.

He released his first EP titled Rapmare under the MicBurnerz Music label in November 2017. He was called up later in 2018 to feature on the most talked about hip hop song ‘Biibi Ba’ by Sarkodie.

The song was nominated for the Best Hiphop Song and Best Edited Video at the 2019  Vodafone Ghana Music Awards(VGMA).

On 1st October 2020, the founding father of the popular music genre hiplife, Reggie Rockstone took to his Twitter page to announced Amerado as one of the best rappers to ever come from Ghana.

As part of pushing the Kumerica agenda, Amerado joined Shatta Wale and other rappers, the likes of YPee, Kwaku Flick, Kofi Jamar, King Paluta, Phaize, Phrimpong in Kumasi to release Ahodwo Las Vegas, the song has more than 1Million views on Youtube.

In 2021, he released his single titled “Taxi driver” which became a jam on airwaves. He followed up with “Me Ho Y3” song which received massive airplays.

He also performed at Ghana Music Awards UK in October 2019.

Amerado is the brand ambassador for Ghana-made chocolates, an agenda led by the Ghana Cocoa Board. He has composed a song titled Ghana Chocolate to promote the agenda.

How much is Amerado worth? Amerado’s net worth is estimated at around $80,000 as 2021. His main source of income is from his primary career as an musician. He is one the best next generations of rappers in Ghana.

Is Sarkodie going through Depression? Check Why!

“NDC Caucus Is Frustrating Us In Parliament”— Afenyo Markin Cries

08/10/2021
ABOUT US
Our Motive is to provide reliable, accurate and informative news to you. The Urban and Rural at heart ❤️
Contact us: [email protected].com
FOLLOW US
© Apumone 2022 All Rights Reserved