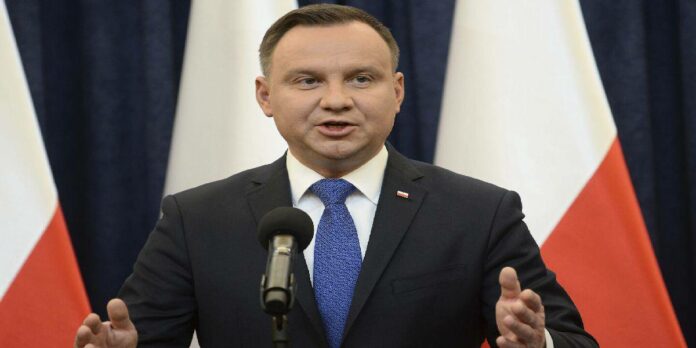 Andrzej Duda is a Polish lawyer and politician who has served as President of Poland since 6 August 2015. Before becoming president, Duda was a member of the Polish Lower House of Parliament (Sejm) from 2011 to 2014 and served as an MEP from 2014 to 2015.

Duda was the presidential candidate for the Law and Justice (PiS) party during the 2015 presidential election in May 2015. In the first round of voting, Duda received 5,179,092 votes – 34.76% of valid votes. In the second round of voting, he officially received 51.55% of the vote, defeating the incumbent president Bronisław Komorowski, who received 48.45% of the vote. On 26 May 2015, Duda resigned his party membership and the European Parliament as the president-elect.

Andrzej Sebastian Duda was born on May 16, 1972 (age 49 years) in Kraków, Poland. His parents are Janina Milewska and Jan Tadeusz Duda, professors at the AGH University of Science and Technology. His grandfather fought in the Polish-Soviet War and later was a member of the Home Army during the Second World War.

In January 2005, Andrzej Duda also obtained a Doctor of Law degree (LL.D.) at the Jagiellonian University. Due to his political career, he has been mostly on unpaid leave from the university since September 2006, except for a 13-month interval beginning in September 2010, when he returned to the university. Additionally, Duda worked as a lecturer at Mieszko I College of Education and Administration, Poznań.

Andrzej Duda began his political career with the now-defunct Freedom Union Party in the early 2000s. After the parliamentary elections in 2005, he began his collaboration with the Law and Justice Party (PiS). From 2006 to 2007, Duda was an undersecretary of state in the Ministry of Justice. Then, from 2007 to 2008, Duda was a member of the Polish State Tribunal.

From 2008 to 2010, during the presidency of Lech Kaczyński, Duda was an undersecretary of state in the Chancellery of the President of the Republic of Poland. In 2010, he was an unsuccessful candidate to become the Mayor of Kraków as a PiS candidate, but was more successful in the 2011 parliamentary election, where he received 79,981 votes for the Kraków area, and thus became a member of the Sejm.

In September 2013, the news magazine Polityka commended Duda for being one of the most active members of parliament, at the time, describing him as being open to opposing arguments and as refraining from personal attacks, as part of his role at the Commission for Constitutional Responsibility. Duda remained a member of the Sejm until he was elected to the European Parliament in 2014.

In the second round, Duda took 51.55% of the vote against the 48.45% share of his rival, then-incumbent President Bronisław Komorowski. On 26 May 2015, he officially resigned from party membership.

In the first round of the 2020 presidential election, Duda appeared to come in first, receiving almost 44% of the votes. Warsaw mayor Rafał Trzaskowski came in second, with just over 30% of the vote. The second round took place on 12 July. Duda won reelection narrowly against Trzaskowski in the 2nd round. He got 51% of the vote to Trzaskowski’s 49%.

Andrzej Duda and Xi Jinping signed a declaration on strategic partnership in Poland, June 2016. The five-year term of Andrzej Duda began on 6 August 2015 with taking an oath of office during a National Assembly session.

Duda rejected the European Union’s proposal of migrant quotas to redistribute asylum seekers, saying: “I won’t agree to a dictate of the strong. I won’t back a Europe where the economic advantage of the size of a population will be a reason to force solutions on other countries regardless of their national interests”.

In September 2015 Prime Minister Ewa Kopacz declared that Poland, as an expression of “European solidarity”, would take in 2,000 people over the next two years, mainly from Syria and Eritrea (out of 3,700 originally requested).

Andrzej Duda and Croatian President Kolinda Grabar-Kitarović were the originators of the Three Seas Initiative. Duda repeatedly met with the general secretary of the Communist Party of China and China’s leader, Xi Jinping, stating that “Polish companies will benefit hugely” from China’s Belt and Road Initiative. Duda and Xi signed a declaration on strategic partnership in which they reiterated that Poland and China viewed each other as long-term strategic partners. Duda said that he hopes Poland will become a gateway to Europe for China.

In November 2015, basing on Art. 139 of the Constitution of Poland, Duda pardoned former Central Anticorruption Bureau (CBA) head Mariusz Kamiński and three CBA officers convicted by a court of 1st instance in the so-called “Land Affair”, marking the first pardon granted by a president before reaching a final verdict. According to some lawyers (including professors Jan Zimmermann – Andrzej Duda’s doctorate promoter, Leszek Kubicki – former Minister of Justice and Andrzej Zoll – former president of the Constitutional Tribunal), Duda breached the Constitution of Poland.

In February 2018, Duda said that he would sign into law Amendment to the Act on the Institute of National Remembrance, making it illegal to accuse ‘the Polish nation of complicity in the Holocaust and other Nazi German atrocities, a measure that has roiled relations with Israel with Prime Minister Benjamin Netanyahu going as far as accusing the Polish government of “Holocaust denial”.

In June 2020, Duda said that he would not allow gay couples to marry or adopt children while describing the LGBT movement as “a foreign ideology” and comparing it to indoctrination in the Soviet Union. He also pledged he would ban LGBT teaching in schools. In response to Duda’s comments, former Prime Minister of Belgium Elio Di Rupo publicly asked the European Commission for an official reaction. Soon after his comments, Duda invited presidential candidate Robert Biedroń (who requested meeting the President) and an LGBT activist, Bartosz Staszewski, to the Presidential Palace, though Robert Biedroń eventually did not take the invitation saying he won’t until President Duda apologizes. According to Staszewski, during their meeting, Duda cited freedom of speech to defend his words about “LGBT ideology”.

On 4 July 2020, Duda proposed changing the constitution to ban LGBT couples from adopting children. On 6 July 2020, he signed a document with a presidential draft of the amendment to the Polish Constitution.

Duda was the first foreign leader to travel to the White House since the start of the COVID-19 pandemic in June 2020. However, on 4 November 2015, during a meeting with the President of Romania Klaus Iohannis in Bucharest, Romania, both leaders established Bucharest Nine, an organization created due to Russian expansionism over Ukraine. It has 9 members, which are Bulgaria, the Czech Republic, Estonia, Hungary, Latvia, Lithuania and Slovakia, apart from Poland and Romania.

In May 2019, Duda visited Azerbaijan where he met with President Ilham Aliyev. He said that “gas and oil alike will flow… from Azerbaijan also to Poland. They will flow via Azerbaijan where the transportation corridors that are currently under construction constitute and will constitute the elements” of China’s Belt and Road Initiative.

U.S. President Donald Trump praised Duda, saying: “He’s doing a terrific job.” In September 2019, Trump and Duda agreed to send 1,000 U.S. troops to Poland. On 24 June 2020, Trump said at a press conference with Duda that the United States plans to move some U.S. troops from Germany to Poland. Trump said that “Poland is one of the few countries that are fulfilling their obligations under NATO — in particular, their monetary obligations — and they asked us if we would send some additional troops. They’re going to pay for that.”

Andrzej Duda is married to his longtime girlfriend Agata Kornhauser-Duda, they had their wedding in 1994. His wife Agata is a teacher of German at Jan III Sobieski High School in Kraków. They met at a party while they were students in high school. The couple has been married since 21 December 1994. They have one daughter, Kinga, who was born in 1995. In September 2020, Duda appointed his 25-year-old daughter, to be an unpaid adviser on social issues. Duda’s father-in-law is Julian Kornhauser, a well-known writer, translator and literary critic. Duda is a keen skier, he participated in the Polish Academic Championships in Alpine skiing when being a university student.

Duda is a Roman Catholic. He took part in religious ceremonies on many occasions, including Midnight Mass, the blessing of food on Holy Saturday, and the Corpus Christi procession in Kraków. In October 2020, he tested positive for COVID-19.

How much is Andrzej Duda worth? Andrzej Duda net worth is estimated at around $10 million. His salary is around $450,000 and his main source of income is from his political career. Duda’s successful career has earned him some luxurious lifestyles and some fancy cars. He is one of the richest and influential politicians in Poland. However, in October 2020, Duda expressed deep concern over the escalation of hostilities between Azerbaijan and Armenia in the disputed region of Nagorno-Karabakh and called on both sides to “cease military operations and engage in dialogue”.

01/11/2021
ABOUT US
Our Motive is to provide reliable, accurate and informative news to you. The Urban and Rural at heart ❤️
Contact us: [email protected]
FOLLOW US
© Apumone 2022 All Rights Reserved