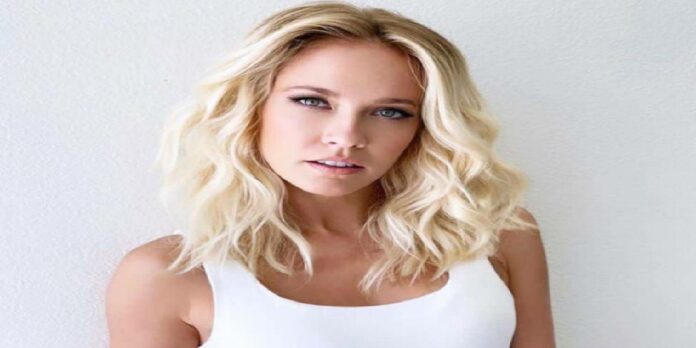 Read the complete write-up of Ann Camp net worth, age, height, parents, husband, movies, Tv shows as well as other information you need to know.

Anna Camp is an American actress and singer. She is best known for her roles as the villainous Sarah Newlin in the HBO vampire drama True Blood (2009, 2013–2014) and Aubrey Posen in the musical comedy Pitch Perfect film series (2012–2017).

Camp made her Broadway debut in the 2008 production of The Country Girl and played Jill Mason in the 2008 Broadway revival of Peter Shaffer’s Equus. In 2012, she was nominated for a Drama Desk Award for her performance in the Off-Broadway play All New People.

Anna Ragsdale Camp was born on September 27, 1982 (age 39 years) in Aiken, South Carolina. Her mother, Dee, is a Democratic Party volunteer, and her father, Thomas Sewell Camp, is a bank executive. She has an older sister, Saluda.

Check Out: Emily Blunt net worth

Camp is of British (English, Scottish, and Welsh), Dutch, French and Swedish descent, and grew up in Columbia, South Carolina. She attended Meadowfield Elementary School and was cast in a Drug Abuse Resistance Education production in the second grade, introducing her to acting. She graduated from the University of North Carolina School of the Arts with a Bachelor of Fine Arts degree in 2004. She moved to New York City shortly thereafter.

Anna Camp played the role of Perfect in columbinus in 2005. In 2007, she was nominated for a Lucille Lortel Award for her performance in the off-Broadway play The Scene. She played Jill Mason in the 2008 Broadway revival of Equus at the Broadhurst Theatre, which starred Daniel Radcliffe as Alan Strang.

Speaking about the role, Camp said, “I had a lot of thought; I didn’t even know if I was going to do Equus because of the nudity and because of the high profile [aspect] of it. But you only live once and you have to take those risks because you’ll only be a better person or actor because of it.”

She appeared in Reinventing the Wheelers, a 2007 television pilot which was not ordered to series by ABC. In 2008, she had a role in the pilot of the ABC television dramedy Cashmere Mafia. She had a starring role as Sarah Newlin in the second season of the HBO supernatural drama series True Blood, which earned her a nomination for a SAG Award for Outstanding Performance by an Ensemble in a Drama Series; Camp had earlier auditioned for the role of Sookie Stackhouse.

In 2011, Camp starred in the premiere of All New People, a play written by Zach Braff and staged at Second Stage Theatre; the production was directed by Peter Dubois and also starred Justin Bartha, David Wilson Barnes and Krysten Ritter.

Check Out: Elizabeth Bank net worth

Camp was a member of the main cast in the first season of Fox sitcom The Mindy Project and played Aubrey Posen in the 2012 musical comedy film Pitch Perfect, later reprising her role in the sequels Pitch Perfect 2 and Pitch Perfect 3.

She had a recurring role in Netflix’s Unbreakable Kimmy Schmidt as Deirdre Robespierre and starred with Nasim Pedrad in Desperados.

Ann Camp is currently dating Micheal Johnson. She was engaged to actor Michael Mosley by September 2008; they married in 2010 and filed for divorce in 2013. Anna began dating Pitch Perfect co-star Skylar Astin in 2013. The couple were reported to be engaged in January 2016. They married on September 10, 2016. On April 19, 2019, the couple announced that they were filing for divorce. As of late August 2019, the divorce was finalized.

How much is Anna Camp worth? Anna Camp net worth is estimated at around $4 million. Her main source of income is from her acting career. However, in 2020, during the COVID-19 pandemic in the United States, Camp revealed that she had caught COVID-19 despite usually taking necessary precautions and that not wearing a mask one time was enough for her to contract the virus. She stated she was “extremely sick for over three weeks and still [had] lingering symptoms.”