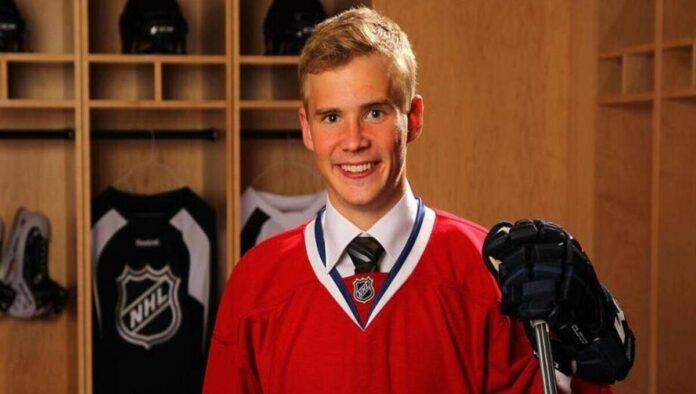 Artturi Lehkonen is a Finnish professional ice hockey player playing for the Colorado Avalanche of the National Hockey League (NHL). Lehkonen was selected by the Montreal Canadiens in the second round (55th overall) of the 2013 NHL Entry Draft, where he spent the first six seasons of his NHL career.

Lehkonen is known as a defensively-minded forward, he famously scored series-winning overtime goals in two consecutive Stanley Cup semi-finals. Internationally, Lehkonen has competed for the Finnish men’s national team, winning medals at the U18 and U20 world championships.

Artturi Lehkonen was born on July 4, 1995 (age 26 years) in Piikkiö, Finland. He was raised in Turku along with his parents. His mother is Riitta Lehkonen and his father Ismo Lehkonen is a Finnish former professional ice hockey player and is currently the head coach of the TUTO Hockey in the Finnish Mestis. His father Lehkonen was also the head coach of HIFK of the Finnish SM-liiga from 1999 to 2001. On January 23, 2015, he was named head coach of the Estonia men’s national ice hockey team, replacing Sakari Pietila.

Artturi Lehkonen played for TuTo and TPS as a youngster and logged his first minutes in Finland’s top-flight Liiga for TPS during the 2011–12 season. He then joined fellow Liiga outfit KalPa prior to the 2012–13 campaign. On 28 March 2014, Lehkonen opted to leave KalPa of the Finnish Liiga and further his development in the Swedish Hockey League (SHL), by signing a two-year contract with Frölunda HC.

Check Out: Pavel Francouz net worth

In Artturi Lehkonen’s second year in Sweden, the 2015–16 season, he made 49 SHL appearances, tallying 16 goals and 17 assists in the regular season plus 16 games in postseason play with a league-best eleven goals and eight assists en route to claiming the title. The 19 points tallied beat Daniel Alfredsson 2004–05 playoffs performance (18pts) to establish a new team record for most points in a single playoff year. He was also influential in winning the Champions Hockey League that season, chipping in with twelve points (five goals, seven assists) in 13 outings.

Artturi Lehkonen signed a three-year, entry-level contract with the Montreal Canadiens of the National Hockey League (NHL) on 8 May 2016. In his debut season with the team, he scored 18 goals across 73 games, with an additional 10 assists. He would manage 12 goals and 9 assists the following season.

Lehkonen scored the Canadiens’ first goal of the 2018–19 season in a 3–2 overtime loss to the Toronto Maple Leafs on October 3, 2018. He would have a career-best 31 points in the final year of his entry-level contract. On 11 July 2019, the Canadiens re-signed Lehkonen to a two-year, $4.8 million contract extension.

He managed only 7 goals and 6 assists during the pandemic-shortened 2020–21 season. The Canadiens qualified for the 2021 Stanley Cup playoffs in the final wildcard spot, and embarked on an unexpectedly deep run, defeating the Toronto Maple Leafs and the Winnipeg Jets in the first two rounds.

On 24 June 2021, Lehkonen scored the series-clinching overtime goal in game 6 of the Stanley Cup Semifinals against the Vegas Golden Knights, allowing the Canadiens to advance to the Stanley Cup Final for the first time since 1993. Dubbed “the biggest goal for the Canadiens in nearly 30 years,” it became a frequent topic of discussion around Lehkonen. Following the team’s loss to the Tampa Bay Lightning in the Finals, the Canadiens re-signed Lehkonen to a one-year, $2.3 million contract extension.

Following the Finals appearance, the 2021–22 season saw the Canadiens perform historically poorly, resulting in the sacking of longtime general manager Marc Bergevin. At a time when most of the team’s roster was judged to be underperforming, Artturi Lehkonen’s strong defensive play attracted praise and began to generate speculation that he would be traded as part of a team rebuild. Lehkonen when asked joked “he couldn’t understand most of the trade talk in Montreal. He doesn’t speak French.”

Artturi Lehkonen was traded by the Canadiens to the Colorado Avalanche in exchange for Justin Barron and a second-round pick in the 2024 NHL Entry Draft on March 21, 2022. His debut with the Avalanche was delayed due to visa issues, but he featured in 16 regular-season games for the team, tallying a further 6 goals and 3 assists to set new career highs in goals (19) and points (38).

Check Out: Hyman Zack net worth

The Avalanche finished second in the NHL and met the Nashville Predators in the first round of the 2022 Stanley Cup playoffs. After sweeping the Predators in four games, the Avalanche went on to beat the St. Louis Blues in six games in the second round, moving on to the Western Conference Final against the Edmonton Oilers.

Artturi Lehkonen’s strong performance with the team through the playoffs attracted praise as one of the best deadline additions of the postseason. In-Game 4 of the series, Lehkonen scored the series-clinching goal in overtime to win the Clarence S. Campbell Bowl and send his team to the Stanley Cup Final for the second consecutive year. He became the first player to achieve this feat since Gordie Drillon of the Maple Leafs in 1938 and 1939.

Artturi Lehkonen is currently not married. His wife or girlfriend is unknown to the general public. He has no child from any previous relationship. However, Lehkonen made his debut with Finland’s men’s national team during the 2015–16 Euro Hockey Tour. Lehkonen is a supporter of Arsenal F.C.

How much is Artturi Lehkonen worth? Artturi Lehkonen net worth is estimated at around $6 million. His main source of income is from his career as a professional ice hockey player. Lehkonen salary is $320,000+ per month with other earnings are over $3 million annually. His successful career has earned him some luxurious lifestyles and some fancy car trips. He is one of the richest and influential ice hockey players in Finland.