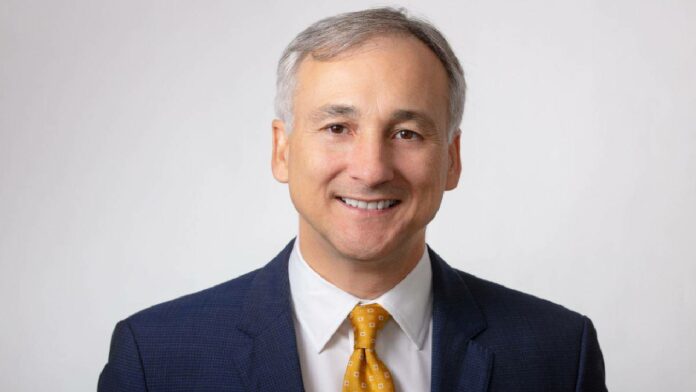 Bernard Lord is a Canadian lawyer, business executive, and former politician. He served as the 30th premier of New Brunswick from 1999 to 2006. Lord was appointed as board chair of Ontario Power Generation in 2014.

Bernard Lord ONB QC was born on September 27, 1965 (age 56 years) in Roberval, Quebec, Canada. He is the youngest son of four children of Marie-Émilie (Morin), a former teacher, and Ralph Frank Lord, a pilot. His father Frank Lord was anglophone and his mother was francophone, and he was raised in a bilingual household in Moncton, New Brunswick, where he spent the rest of his early life.

In 1997, Lord was elected leader of the PC Party of New Brunswick and then became the MLA for the district of Moncton East in a 1998 by-election. Much of Lord’s success came from the countless months he spent meeting party members across New Brunswick, and in part because he was also flawlessly bilingual and able to draw a strong concentration of support in the Moncton area, one of four cities in which members could vote. Bernard Lord defeated Norman Betts, who was the perceived frontrunner, as well as Margaret-Ann Blaney, who, with Betts, would go on to serve in Lord’s cabinet and Cleveland Allaby.

Bernard Lord’s PC party overcame an early deficit in the polls to pull out a landslide victory in the provincial general election, winning 44 of 55 seats in the legislature on June 7, 1999. At just 33 years of age, Lord (on June 21) became one of the youngest Premiers in Canadian history.

Lord was elected on his “200 Days of Change” platform, consisting of 20 promises of things he would do within the first 200 days of his mandate if he were elected premier using the successful tactics from the 1994 United States elections of Republican Congressional leader, Newt Gingrich.

In 2002, Lord delivered what the media and others hailed as an electrifying speech at the national Progressive Conservative Party of Canada convention in Edmonton, Alberta, which started speculation that he might run for a job in federal politics, specifically, replacing Joe Clark as federal PC leader.

A very strong movement of influential conservatives erupted after Edmonton to lobby the Premier into federal politics, everything from a website to a coast-to-coast organization was being set up to woo the Premier to leave Fredericton and head to Ottawa. A short time later, Lord shot down any notions that that might happen, choosing instead to remain focused on provincial politics and the 2003 New Brunswick election.

That election was not kind to Bernard Lord, with the Liberals using the issue of rising car insurance to catch the PC Party off guard. The Party wasn’t able to regain its footing until relatively late in the campaign and barely held on to a majority over the Liberal Party led by Shawn Graham.

Bernard Lord was again courted for federal politics in late 2003 when the PC Party of Canada and the Canadian Alliance merged into the Conservative Party of Canada. In the end, Lord opted to stay in New Brunswick due to his young family and the fact that his departure would force his party into a minority government situation.

Lord’s government came under fire over a variety of unpopular stances in 2004, most notably changes to health care. These included closures of beds at hospitals in Miramichi and Dalhousie and consolidation of four hospitals in the Upper Saint John River Valley into one. The Liberals, under leader Shawn Graham, led in public opinion polls as of the summer of 2004 and maintained that lead; however, Lord remained the most favored Leader to be Premier of New Brunswick for a time.

On August 10, 2006, Bernard Lord announced that on August 19, he would be calling an election for September 18. This election call was in response to the loss of a caucus member, Peter Mesheau, who announced his intention to resign to work in the private sector. The resignation would have caused Lord to slip into a minority government and the subsequent by-election could have flipped the balance of power to the Liberals.

He decided that instead of a by-election deciding the fate of his government, he would let the people choose. Some observers saw Lord’s election call as a bold move considering his popularity numbers had only recently started to surpass the Liberal Leader.

In the head-to-head campaign that followed, Bernard Lord lost the government to the Liberals, who took 29 seats to 26 for the Conservatives. The Tories did manage to win the popular vote, besting the Liberals 47.5% to 47.2%. Lord left the Premier’s Office on October 3, 2006. However, on December 13, 2006, Lord announced that he was resigning as PC leader, further he said he would resign his legislative seat in Moncton East on January 31, 2007.

Bernard Lord took a position as senior counsel with the law firm McCarthy Tetrault, splitting time between their offices in Montreal and Ottawa while continuing to maintain his residence in Fredericton after leaving politics.

Lord was appointed by Prime Minister Stephen Harper as head of the Bilingualism Committee on December 3, 2007. He reviewed Canada’s Official Language Laws, and he made suggestions where improvements can be made. In December 2007, Lord was named as the President of the 2009 CHL Memorial Cup selection committee.

Check Out: Brian Gallant net worth

In October 2008, it was announced that Lord would be appointed as president and CEO of the Canadian Wireless Telecommunications Association, a lobbyist group that represents cellular, messaging, mobile radio, fixed wireless and mobile satellite carriers, as well as companies that develop and produce products and services for the industry.

He was named in 2013 to the board of Ontario’s public utility provider, Ontario Power Generation, and he was appointed as board chair in March 2014 by the government of Kathleen Wynne. He was tasked with cutting expenses after an auditor’s report that came out late in the term of his predecessor, Jake Epp, criticized the agency for cost overruns and excessive executive wages and bonuses.

Bernard Lord is married to his longtime girlfriend Diane Haché, they had their wedding in 1990 in a private ceremony. The couple are happily married with their children. However, on June 15, 2016, Lord was named as the Chief Executive Officer of Medavie Blue Cross effective September 1, 2016.

How much is Bernard Lord worth? Bernard Lord net worth is estimated at around $7 million. His main source of income is from his career as a former premier and business executive. Lord successful career has earned him some luxurious lifestyles and some fancy cars trips. He is one of the richest and influential politicians in Canada. Bernard Lord salary ranges from $175,000 to $455,000.

What is Cryptocurrency?, Types, Risks,

11/02/2021
ABOUT US
Our Motive is to provide reliable, accurate and informative news to you. The Urban and Rural at heart ❤️
Contact us: [email protected]
FOLLOW US
© Apumone 2022 All Rights Reserved
Go to mobile version