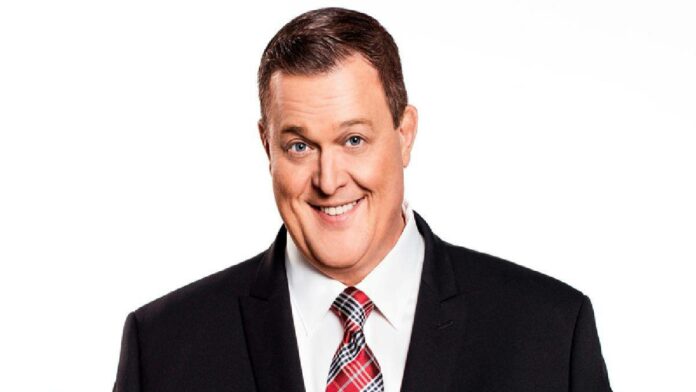 Billy Gardell is an American actor and stand-up comedian. Gardell played Chicago police officer Mike Biggs on Mike & Molly. He also had a recurring role as Billy Colivida on Yes, Dear and appeared in a dozen episodes of My Name Is Earl as a police officer.

Gardell voiced Santa in Ice Age: A Mammoth Christmas, as well as starring on Sullivan & Son in the recurring role of Lyle Winkler. Since 2019, Gardell has played Bob Wheeler in the CBS sitcom series Bob Hearts Abishola. In March 2021 Gardell began appearing in advertisements for the A1C medication Ozempic.

William Gardell Jr. was born on August 20, 1969 (age 52 years) in Swissvale, Pennsylvania, United States. He is the son of Parents: Linda Gray, and William Gardell. Billy attended Winter Park High School in Orange County, Florida, in 1985. As a child, he moved to Florida with his mother and younger siblings after his parents divorced. After that, he only visited Pennsylvania in the summers.

Gardell has said living in Florida was a positive experience. At the age of 15, he started working at a department store warehouse in the receiving area where he would unload trucks and stack pallets. In 1987, he started cleaning bathrooms, seating people, and answering phones at a local comedy club, Bonkerz.

On December 28, he started performing at the comedy club’s open-mic nights after he made a dare with some co-workers. “If I didn’t do an open mic night, I couldn’t cover the bet. I was running my mouth that I would do it. They bet me I wouldn’t,” he explained. He eventually started opening for Dennis Miller and George Carlin.

Gardell was a member of International Thespian Society Troupe 850, whose other notable alumni include Amanda Bearse, who is a fellow graduate of Winter Park High School, and Ben Rock of The Blair Witch Project.

Billy Gardell is known for his comedic roles and is influenced by Jackie Gleason. He has also listed Richard Pryor, George Carlin, John Candy, and John Belushi as his influences. Although Bonkerz helped launch his comedy career, he has credited the support from his grandmother, saying “She told me when I was 8 years old that I could be a comic”. Before Mike & Molly, Gardell revealed that he considered a career in radio after being on the road for his comedy act began to affect his family time.

Gardell has performed in several feature films, including Bad Santa (with Billy Bob Thornton) You, Me, and Dupree (with Owen Wilson), and Avenging Angelo (with Sylvester Stallone and Anthony Quinn) as well as appearing numerous times in recurring roles in several US television series, including NBC’s Heist, The Practice, Yes, Dear, Desperate Housewives, Lucky, Bones, My Name Is Earl, Monk, and The King of Queens.

Check Out: Shaynna Blaze net worth

He appeared as himself on the Comedy Central series Make Me Laugh. Subsequently, he appeared on Miller’s television program Dennis Miller, telecast on the US financial news network CNBC (conducting “man-on-the-street” interviews). Notably, he created and staged an SNL-style charity performance of a piece called Winter Park Live, the proceeds from which were donated to Comic Relief.

Gardell continues to make weekly appearances on hometown local radio station, WDVE, appearing on The DVE Morning Show. Gardell also appeared on Chelsea Lately, as a roundtable participant. Gardell appeared on a special for Comedy Central Presents in 2007 that aired on April 4, 2008. Gardell also played the host of Pizza Talk, an imaginary TV series, in commercials for Round Table Pizza. In 2006, Gardell’s first comedy album, Billy Gardell: Throwback, was released.

From September 2010 to May 2016, Gardell starred in Mike & Molly, alongside Melissa McCarthy. In November 2011, he lent his voice to Santa in Ice Age: A Mammoth Christmas. His stand-up special Halftime was released in 2011 and aired on Comedy Central. It was filmed in Pittsburgh and profiles working-class America. As of 2011, he continues to tour as a stand-up comedian in addition to acting. In a 2011 Orlando Sentinel article, Gardell said he wouldn’t mind doing movies again.

Check Out: Kristen Wiig net worth

Since 2018, Billy Gardell has recurred on the CBS spinoff sitcom Young Sheldon as neighbor Herschel Sparks. In October 2018, he was cast as Bob in the CBS pilot of Bob Hearts Abishola, alongside Folake Olowofoyeku. In May 2019, the series was ordered, and it premiered in September 2019.

Gardell is a Pittsburgh Steelers fan, having participated in several Terrible Towel waves with other Steeler fans at Heinz Field. His favorite player growing up was Jack Lambert, with his son liking former Steeler Hines Ward.

Billy Gardell is married to his longtime girlfriend Patty Knight, they had their wedding in 2001. The couple has a son, William III Gardell, born in 2003. In a 2011 USA Today article, Gardell had said he may retire when his son is a teenager to spend more time with him. His parents still live in Florida, where he occasionally visits them. Regarding his weight, Gardell has explained that he “always had a little gut” and weighed 350 pounds (160 kg) at one point.

How much is Billy Gardell worth? Billy Gardell’s net worth is estimated at around $10 million. His main source of income is from his career as an actor and comedian. Gardell’s successful career has earned him some luxurious lifestyles and some fancy cars trips. He is one of the richest and most influential actors in the United States.

07/10/2021
ABOUT US
Our Motive is to provide reliable, accurate and informative news to you. The Urban and Rural at heart ❤️
Contact us: [email protected]
FOLLOW US
© Apumone 2022 All Rights Reserved
Go to mobile version