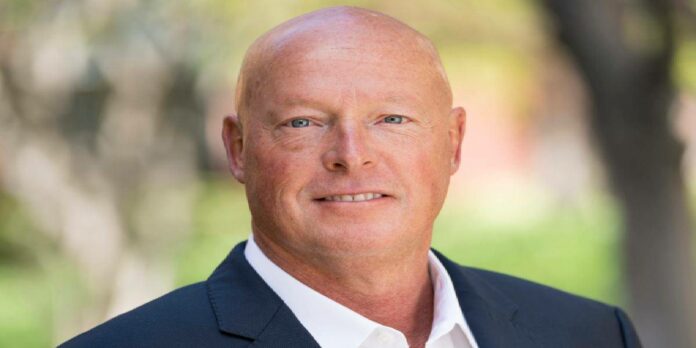 Robert Chapek was born on August 21, 1960 (age 61 years) in Hammond, Indiana, United States. He is the son of a working mother Marie Lofay and Bernard W. Chapek. His father Bernard was a World War II veteran. Because both of his parents worked, Chapek described himself as a “latch-key kid” at a time when this was uncommon.

Chapek said that watching both parents work “instilled a work ethic in me, and they worked hard for the nicer things in life. I saw their role-modelling, and it made a permanent impact on my drive and ambition.” His family went on annual trips to Walt Disney World.

Bob Chapek graduated from George Rogers Clark Jr./Sr. High School in 1977. He later earned a Bachelor of Science degree in microbiology from Indiana University Bloomington and a Master of Business Administration from Michigan State University.

Bob Chapek worked for the H. J. Heinz Company in brand management and in advertising for J. Walter Thompson before joining the Walt Disney Company in 1993.

Chapek began his career with the Walt Disney Company in 1993. He started as the marketing director for the company’s Buena Vista Home Entertainment division, which at that point was still very much focused on VHS tapes. The then-CEO Michael Eisner described Chapek by saying, “He was always an executive that you knew would be on the rise… He knew how to grow the business while adjusting to the changing marketplace, which was intense.” Chapek is credited for bringing Disney’s home entertainment division into the digital age, by focusing on releasing properties on DVD and later Blu-ray discs.

In July 2006, he was promoted to become the president of Buena Vista Home Entertainment, which included all home video, DVD, and Blu-ray releases for all the various divisions. In 2009, he became president of distribution for Walt Disney Studios.

In 2013, Chapek secured a deal with Hasbro, whereby the toy company paid Disney $80 million in royalties to extend the license for Marvel toys and an agreement for Hasbro to pay Disney up to $225 million for the rights to forthcoming Star Wars merchandise.

In 2014, Chapek launched the Disney Imagicademy, which was a suite of numerous tablet and smartphone apps designed to give children high-quality learning games. This was Disney’s first full foray into the learning-app market. Chapek said he spearheaded this initiative after numerous parents told his department that they found it difficult to find high-quality learning apps out of the thousands that were available online.

On February 23, 2015, Chapek was named chairman of Walt Disney Parks and Resorts effective that day to replace Thomas O. Staggs, who was promoted to Disney Company Chief operating officer earlier in the month. Chapek immediately began working towards the completion and launch of Shanghai Disneyland in 2016, which hosted over 11 million guests in its first year of operation. He also oversaw the completion and launch of Pandora – The World of Avatar at Disney’s Animal Kingdom in 2017.

Chapek also directly managed the construction and opening of the new Star Wars: Galaxy’s Edge lands at Disneyland and Walt Disney World. Disney said of Galaxy’s Edge, “It’s the most immersive land we have ever built,” citing the themed restaurants, shops and roaming interactive characters. Disney reportedly spent $1 billion on the sprawling 14-acre land in Disneyland in Anaheim, prompting CNN to comment that “Disney spared no expense.”

As Chairman of Parks and Resorts, Chapek invested over $24 billion into the theme parks, attractions, hotels and cruise ships. The New York Times noted that Chapek’s spending was more money than Disney spent in acquiring Pixar, Marvel and Lucasfilm combined. In the fall of 2017, after parks and resorts recorded a 14% increase in operating income, many in the media began to speculate that Chapek would likely succeed Bob Iger as the next Disney CEO.

However, during his time at parks and resorts, Chapek also drew sharp criticism from many in the Disney community. For instance, all of the expensive and ambitious projects (mentioned above) that were finished under Chapek were actually started under Tom Staggs. Meanwhile, the projects that were started under Chapek were seen as less than ambitious, such as the relatively safe Pixar Pier, Toy Story Land, as well as changes to EPCOT, among others.

He was also criticized for the heavy use of the existing intellectual property during his tenure at the parks, as there were little to no changes or additions during his tenure that didn’t involve the use of the existing intellectual property. Also, there was a reduction in the scope and scale of Star Wars: Galaxy’s Edge. In addition, there was also a decrease in maintenance throughout many of the parks during his time as Chairman of Parks and Resorts, similar to that when Paul Pressler was chairman in the late 1990s and early 2000s.

In March 2018, after a reorganization of divisions in order to prepare for the launch of Disney+, Chapek was given back the consumer products divisions (including the Disney Stores), in addition to his responsibilities for all of the parks and resorts and related experiences. Then, CEO Bob Iger said, “Bob Chapek comes to this new role with an impressive record of success at both parks and resorts and consumer products, and he is the perfect leader to run these combined teams.” This furthered speculation that Chapek would be Iger’s successor.

In August 2019, Chapek announced that he had negotiated a retail collaboration to open 25 mini Disney Store shops within select Target department stores across the United States. Chapek stated that people who purchase Disney products were already likely to shop at Target, and the deal gives Disney the opportunity to expand its own footprint beyond traditional shopping malls. The Disney mini-shops will be an average of 750 square feet and be located near Target’s kid’s clothing and toy departments. They’ll have more than 450 items, including more than 100 products previously only available at Disney retail locations. On May 18, 2020, Chapek announced Josh D’Amaro as his successor to the position of chairman of Disney Parks, Experiences and Products.

Bob Chapek was named chief executive officer of the Walt Disney Company replacing Bob Iger in February 2020, who will remain as executive chairman until the end of 2021. This was considered a surprise to many Disney employees, who had seen Tom Staggs as the heir apparent to Bob Iger.

In April 2020, Chapek was elected to the Walt Disney Company’s board of directors. It was later revealed, the same month, that while Chapek remained CEO, Iger had resumed control of the company’s operational duties for the time being, due to the COVID-19 pandemic.

In numerous interviews with financial news outlets during the pandemic, Chapek has said he is focusing on opening Disney’s theme parks. In May 2020, Shanghai Disneyland opened with limited guest capacity capped at approximately 24,000 visitors per day, pursuant to government regulations. Chapek acknowledged that this was a “baby step” but found the attendance figures encouraging, considering that the limited number of tickets were sold out. Chapek vowed to increase capacity in the weeks to come, albeit in a conservative manner.

Bob Chapek stated that upon the reopening of Walt Disney World in July 2020, both employees and guests would be required to take temperature checks, wear face masks, and observe social distancing guidelines. He said that the company would continue to work with local government and healthcare professionals to open the parks responsibly. He added that when the parks reopened, the first attraction he’ll ride will be Pirates of the Caribbean.

In October 2020, Chapek agreed to keep Disney World at only 25% capacity until the CDC issued new guidance, and also stated that with regards to reopening Disneyland in California, “It’s not much of a negotiation. It’s pretty much a mandate that we stay closed.”

Check Out: Kevin A. Mayer net worth

In March 2021, after California eased COVID-19 restrictions, he then stated, “Here in California, we’re encouraged by the positive trends we’re seeing and we’re hopeful they’ll continue to improve and we’ll be able to reopen our Parks to guests with limited capacity by late April.” By July 2021, Walt Disney World had officially ended their mask mandate (except while on Disney transportation) and temperature checks and was operating at a higher capacity. That same month, fireworks shows at both Walt Disney World and Disneyland returned.

Chapek spoke in October 2020 about the company’s decision to begin focusing on streaming media, including Disney+, and direct-to-consumer advertising. Multiple films that were originally slated for theatrical releases, including Mulan and Soul, skipped theatres and were instead released only to Disney+ for a premium fee.

In June 2021, outgoing CEO Bob Iger warned company executives not to let data influence creative decisions within the Walt Disney Company. In November 2021, during the call with investors, the chief executive officer (CEO) of The Walt Disney Chapek spoke about the company’s decision to begin focusing on an entirely new industry for the studio – gambling.

Bob Chapek is married to his longtime girlfriend Cynthia Chapek, they had their wedding in 1980. The couple has three children and four grandchildren. Bob and his wife Cynthia live in a private in California.

How much is Bob Chapek worth? Bob Chapek net worth is estimated at around $50 million. His main source of income is from his career as a business executive and entrepreneur. Chapek successful career has earned him some luxurious lifestyles and some fancy cars. He is one of the richest and influential CEOs in the United States.