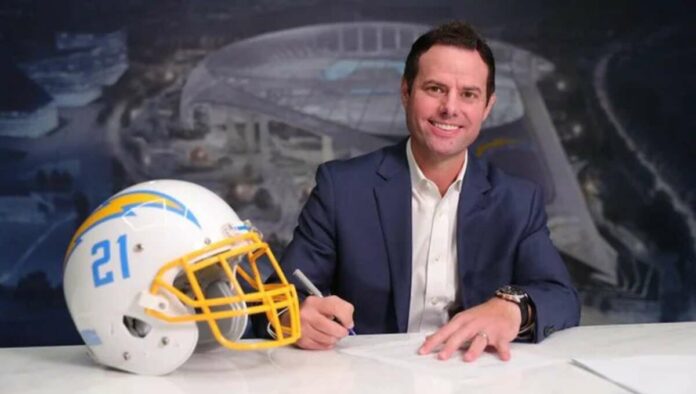 Read about Brandon Staley net worth, age, wife, children, height, family, parents, salary, and NFL career as well as other information you need to know.

Brandon Staley is an American football coach who is the head coach of the Los Angeles Chargers of the National Football League (NFL). He previously served as the defensive coordinator for the Los Angeles Rams in 2020 and also served as an assistant coach for the Denver Broncos and Chicago Bears.

Brandon John Staley was born on December 10, 1982 (age 40 years) in Perry, Ohio, United States. Staley went to the University of Dayton and started two years as quarterback for the Flyers guiding the team to a 16–5 record from 2003 to 2004. He finished his playing career at Mercyhurst College, playing on the football team in 2005.

Brandon Staley began his coaching career as a graduate assistant at Northern Illinois from 2006 to 2008 before working with defensive linemen and special teams at Division III St. Thomas in 2009. In 2010 and 2011 Staley served as the associate head coach and defensive coordinator at Hutchinson Community College.

Check Out: Sean McVay net worth

Brandon Staley was hired on January 16, 2020, by the Los Angeles Rams as their defensive coordinator, replacing Wade Phillips. In his only year as coordinator in 2020, Staley helped guide the Rams defense to 1st in points and total yards allowed, positioning himself as an attractive head coaching candidate around the league.

On January 17, 2021, Staley was hired as head coach of the Los Angeles Chargers to replace Anthony Lynn. On September 12, 2021, Staley made his regular-season head coaching debut against the Washington Football Team and led the Chargers to a 20–16 victory.

Staley led the Chargers to a 9–7 record through the first 16 games of the season. However, against the Las Vegas Raiders in Week 18 in a win or tie or go-home situation, Staley came under scrutiny for two decisions during the game. The first involved a failed fourth down conversion on the Chargers’ own 18-yard line, giving the Raiders a short field, which they would score on to extend their lead to 12. The second was calling a timeout with 38 seconds left in the overtime period with the Raiders at the Chargers 39 yard line.

Brandon Staley claimed he called the timeout to get the right defensive personnel on the field as the Raiders were running the ball. Following the game there was conjecture that the timeout proved to be costly for the Chargers as the Raiders kicked a 47-yard field goal as time expired, winning 35–32, and eliminating the Chargers from playoff contention. However, when discussing the moment on a podcast, Raiders’ interim head coach Rich Bisaccia stated that “the timeout was really irrelevant.”

In the 2022 season, Staley led the Chargers to a 10–7 record, finishing in second place in the AFC West. The Chargers finished as the AFC’s 5th seed and played the 4th seed 9–7 Jacksonville Jaguars on January 14, 2023, in the AFC Wild Card round. After starting the game with a 27–0 lead, the Jaguars went on to make a comeback and win the game 31–30 with a field goal as time expired. It was the third-largest comeback in NFL playoff history.

Brandon Staley is married to his wife Amy Ward, they had their wedding in 2011. His wife is a private person and they have three children together. However, Staley was diagnosed at 24 years old with Hodgkin lymphoma, but has been cancer-free for over a decade following chemotherapy at the Cleveland Clinic. As of early 2023, Brandon Staley and his wife Amy Ward are still married and are living a happy life with their three children.

How much is Brandon Staley worth? Brandon Staley net worth is estimated at around $1.2 million. His main source of income is from his primary work as an American football coach. Brandon Staley’s salary per month and other career earnings are over $500,000 dollars annually. His remarkable achievements have earned him some luxurious lifestyles and some fancy car trips. He is one of the richest and most influential coaches in the United States. Brandon Staley stands at an appealing height of 1.83m and has a good body weight which suits his personality.