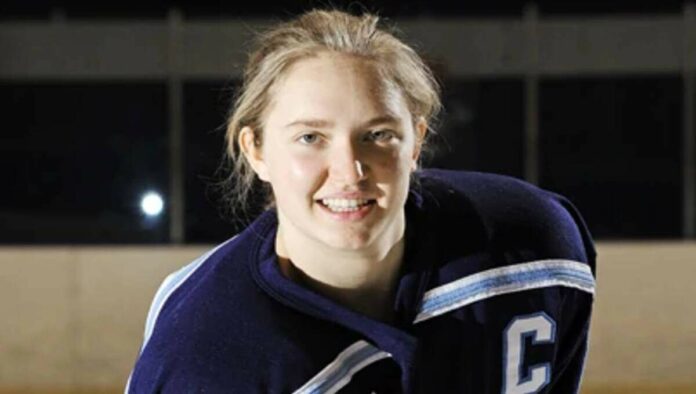 Brianne Jenner is a Canadian professional ice hockey player and a member of Canada’s national women’s hockey team, currently affiliated with the Toronto chapter of the Professional Women’s Hockey Players Association (PWHPA). She made her debut for Canada at the 2010 Four Nations Cup and won a gold medal. She was also a member of the Cornell Big Red women’s ice hockey program.

Brianne Alexandra Jenner was born on May 4, 1991 (age 31 years) in Oakville, Canada. He is the daughter of Brenda Jenner and Dave Jenner. She has one sibling a brother, Graham Jenner.

Brianne Jenner was the captain of the Appleby College hockey team in high school. Jenner played junior hockey in the Provincial Women’s Hockey League (PWHL) with the Stoney Creek Sabres. She was also the captain of Team Ontario Red at the 2008 National Women’s Under-18 Championship. She scored the game-winning goal in double overtime of the gold medal game.

Brianne Jenner played a role in both victories for the Cornell Big Red ice hockey team on October 29 and 30, 2010. On October 29, she had three assists at Quinnipiac. The following day, she scored a pair of goals and added an assist at Princeton.

Jenner led her team with eight points during three games played from February 7 to February 11, 2012. Versus nationally-ranked Mercyhurst, Jenner had a goal and an assist in a February 7 victory over Mercyhurst. In a 5–0 shutout win over the Brown Bears (on February 10), Jenner garnered two assists from two goals.

Check Out: Sarah Nurse net worth

On February 11, Jenner scored the game-winning goal versus the Yale Bulldogs that clinched the ECAC Hockey regular-season championship. In addition, she went on to score another goal, while earning her 30th assist of the season.

Before Brianne Jenner went to college, she played with the Mississauga Chiefs during the 2008–09 Canadian Women’s Hockey League season. The following season, she joined the Burlington Barracudas and then left for Cornell in 2010.

On June 6, 2015, Jenner announced her entry into the 2015 CWHL Draft with the hopes of being selected by the Calgary Inferno as she would also be studying for a master’s degree in public policy at the University of Calgary and would play alongside three or more Cornell Big Red graduates.

Jenner helped the Inferno capture their first Clarkson Cup championship in 2016. Contested at Ottawa’s Canadian Tire Centre, she scored twice in an 8–3 victory over Les Canadiennes de Montreal. She remained with the Inferno until the league ceased operations following the 2018–19 CWHL season.

Brianne Jenner participated in the 2021 Secret Cup skating for Team Sonnet (Toronto), which was the Canadian leg of the 2020–21 PWHPA Dream Gap Tour. In a 4-2 championship game loss versus Team Bauer (Montreal), she recorded a goal versus Ann-Renee Desbiens.

Brianne Jenner was named to the 2014 Olympic roster for Canada. In a January 9, 2008, contest versus Germany (at the inaugural World Women’s Under-18 hockey championship), Jenner scored twice and earned an assist in a 10–1 win.

Jenner and defender Jocelyne Larocque were released on November 27, 2009, from Hockey Canada’s centralized roster to determine the final roster for the 2010 Vancouver Winter Games.

She was invited in March 2011 to the Canadian national women’s ice hockey team selection camp to determine the final roster for the 2011 IIHF Women’s World Championships.

Check Out: Natalie Spooner net worth

Brianne Jenner was named to Canada’s 2022 Olympic team on January 11, 2022. Brianne Jenner’s 9 goals in the tournament tied the Olympic record for most goals in a single women’s tournament (9), capping off a tournament MVP nod and her 2nd Olympic gold medal.

She stands at an appealing height of 5 ft 19inch which is equivalent to 1.75m and has a body weight of 71kg (157 lb) which suits her personality.

Brianne Jenner is married to her longtime partner Hayleigh Cudmore, they had their wedding in July 2019. Her wife is a former teammate with the Cornell Big Red and the Calgary Inferno. As of 2022, Jenner and her wife Hayleigh Cudmore have a baby together, their son’s name is June Kirby Cudmore Jenner.

How much is Brianne Jenner worth? Brianne Jenner net worth is estimated at around $4 million. Her main source of income is from her career as a professional ice hockey player. Jenner salary per month and other earnings are over $2 million annually. Her successful career has earned her some luxurious lifestyles and some fancy car trips. She is one of the richest and influential ice hockey players in Canada.