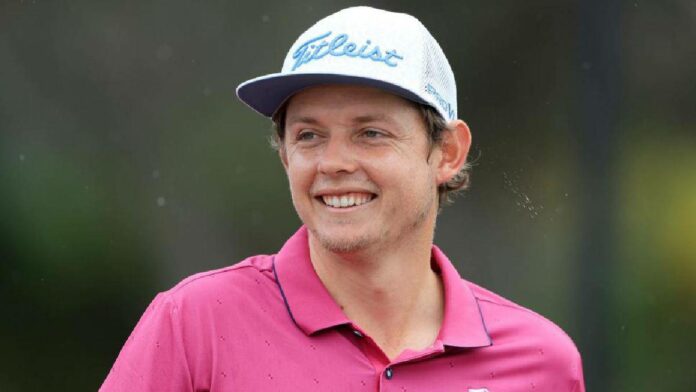 Cameron Smith is an Australian professional golfer. Partnered with Jonas Blixt, they won the 2017 Zurich Classic of New Orleans. He won the tournament again in 2021 with Marc Leishman.

Smith’s biggest individual successes have been in winning the 2022 Players Championship, the 2022 Sentry Tournament of Champions, the 2020 Sony Open in Hawaii and the Australian PGA Championship, which he won back-to-back in 2017 and 2018. Smith also was runner-up in the 2020 Masters.

Cameron Smith was born on August 18, 1993 (age 28 years) in Brisbane, Australia. He is the son of Des Smith and Sharon Smith.

Cameron Smith turned professional in 2013. He has played on the PGA Tour of Australasia since 2013. He was tied for second at the 2015 Coca-Cola Queensland PGA Championship and at the 2016 Emirates Australian Open.

Smith played on the Asian Tour in 2014, finishing in the top-10 seven times and finishing 5th on the Order of Merit. His best finish was tied for second at the 2014 CIMB Niaga Indonesian Masters. Smith’s first PGA Tour event was the CIMB Classic in October 2014, which was a co-sanctioned event with the Asian Tour; he tied for 5th.

In April 2015, Smith tied for 15th in the RBC Heritage, playing on a sponsor’s exemption. After qualifying for the 2015 U.S. Open, his top-4 finish earned him an invitation to the 2016 Masters Tournament. The finish also earned Smith Special Temporary Membership on the PGA Tour for the remainder of the 2015 season.

Cameron Smith earned his 2015–16 PGA Tour card by earning enough as a non-member to have been in the top 125 on the money list: his best three events would have been sufficient.

Smith finished 157th in the FedEx points list in 2016. His performance in the Web.com Tour Finals, where he was runner-up in the Nationwide Children’s Hospital Championship, allowed him to return to the PGA Tour for 2017.

In May 2017, Smith, partnered with Jonas Blixt, won the Zurich Classic of New Orleans, the first team event on the PGA Tour since 1981. The pair did not make a bogey during the tournament and defeated Scott Brown and Kevin Kisner in a playoff. It was Smith’s first career PGA Tour win. He had two top-10 finishes on the 2017 PGA Tour, tying for 6th place at the Valero Texas Open and for 7th at the Wyndham Championship and finished 46th in the FedEx Cup standings.

He started the new PGA Tour season by tying for 5th place in the CIMB Classic in Malaysia and finishing 3rd in the CJ Cup in South Korea in late 2017. Smith continued his good form by finishing 4th in the Emirates Australian Open and then winning the Australian PGA Championship the following week, beating Jordan Zunic in a playoff.

On 2 December 2018, Smith defended his title at the Australian PGA Championship, winning by two strokes over Marc Leishman. In December 2019, Smith played on the International team at the 2019 Presidents Cup at Royal Melbourne Golf Club in Australia. The U.S. team won 16–14. Smith went 1–1–1 including a win in his Sunday singles match against Justin Thomas.

In January 2020, Smith won the Sony Open in Hawaii in a playoff over Brendan Steele; his first individual victory on the PGA Tour. In finishing tied for runner-up to Dustin Johnson at the 2020 Masters, Smith also became the first golfer in Masters history to shoot all four rounds in the 60s (67-68-69-69).

In April 2021, Smith won the Zurich Classic of New Orleans for the second time. This time he was partnered with fellow countryman Marc Leishman. The duo won in a playoff over Louis Oosthuizen and Charl Schwartzel.

Cameron Smith won the 2022 Sentry Tournament of Champions at Kapalua Resort in Maui, Hawaii in January 2022. Smith shot a PGA Tour record of 34 under par winning by one stroke over world number one Jon Rahm. 34 under par beat the previous mark of 31 under par set by Ernie Els at the same tournament in 2003.

Check Out: Bryson DeChambeau net worth

Smith won The Players Championship at TPC Sawgrass, by one shot from Anirban Lahiri, becoming the fifth Australian to win the tournament in March 2022. He birdied the par-3 17th “Island Green” to take a three-shot lead into the final hole.

He put his second shot on 18 into the water while Lahiri also birdied the 17th, a hole back, to close the gap and set up a tense finish to the tournament. Smith managed to finish with a bogey for a final score of 13-under par, which was enough to win after Lahiri could only par the final hole to finish one shot behind.

Cameron Smith is currently single and not married. He hasn’t disclosed his girlfriend or wife to be. Smith is rumored to be in a private relationship to focus on his career. Cameron Smith stands with an appealing height and has a good bodyweight that suits his personality. He currently lives in a beautiful house in Jacksonville, Florida, United States.

26/04/2022
Read the write-up of John Stanley net worth, age, wife, children, height, family, parents, radio and television shows as well as other information you...

26/06/2021
ABOUT US
Our Motive is to provide reliable, accurate and informative news to you. The Urban and Rural at heart ❤️
Contact us: [email protected]
FOLLOW US
© Apumone 2022 All Rights Reserved
Go to mobile version