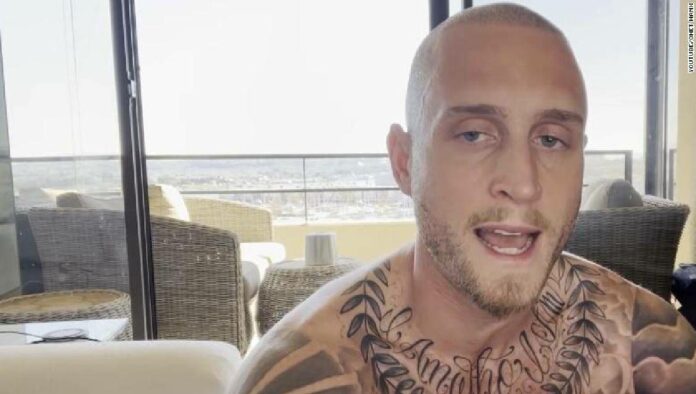 Chet Hanx is an American actor and musician. The son of actors Tom Hanks and Rita Wilson, he has had recurring roles on Empire and Shameless. Hanks also appeared as Joey Maldini in the Showtime legal drama miniseries Your Honor.

Hanks later attended the Oakley School, a now-closed therapeutic boarding school in Oakley, Utah, which was owned by Aspen Education Group. Hanks played lacrosse there. From there, Hanks studied theater at Northwestern University where he was a member of the Pi Kappa Alpha fraternity. His older half-brother is actor Colin Hanks.

Chet Hanks’ acting career began with his debut role as Dexter in the 2007 film Bratz. Soon after, his acting career picked up with a string of small film roles in the early 2010s. He was active in television in the latter half of the decade after achieving sobriety. From 2016 to 2018, Hanks appeared as Charlie, the father of character Sierra Morton’s child, on the American version of Shameless.

Hanks played rapper Blake in hip-hop drama Empire from 2018 to 2019. In 2020, he had a cameo in the World War II film Greyhound starring his father. Starting later that year, he portrayed Joey Maldini, the best friend of a hit-and-run victim’s brother, in the Showtime courtroom miniseries Your Honor.

Check Out: Colin Hanks net worth

In 2011, while a student at Northwestern University, Hanks recorded “White and Purple” under the alias Chet Haze. The song was a remix of Wiz Khalifa’s single “Black and Yellow” with the lyrics changed in reference to his school colors. Some people claimed that his song was plagiarized from another similar parody with the title “White and Purple (NU Anthem 2010)” by Mo Greene. In an interview with Vice, Chet Hanks justifies this by claiming “he did not get as much popularity as me.”

Chet Hanks and Drew Arthur formed the musical duo FTRZ after being introduced in 2016. In 2018, they released two singles (“Models” and “NowhereLand”) as well as the Ocean Park EP. The duo released two tracks in 2020, “Harley” and “Ticket Out My Head” under the new name Something Out West.

Chet Hanks has described himself as the black sheep of his family due to the contrast between his public controversies and his father’s clean-cut image as “America’s dad”. In 2015, Hanks was wanted by British police after damaging a hotel room, incurring $1800 in damages. He entered rehab for cocaine addiction that year.

A judge in Fort Bend County, Texas granted Hanks’ former girlfriend Kiana Parker a temporary protective order against him in January 2021; in her filing, she described months of verbal and physical abuse. Early that March, Hanks filed a lawsuit against Parker for theft, conversion, assault, and battery, stemming from an altercation on January 8. Footage of the event, in which Hanks can be seen bleeding, was released by TMZ on March 31.

Check Out: Maren Morris net worth

Chet Hanks posted a video to Instagram on March 26, 2021, declaring a “White Boy Summer.” While the video was mostly received with good humor, Hanks’ resurgence in the public eye as a result of the video led to increased coverage of his legal battles with Parker.

Hanks posted a video to Instagram on August 10, 2021, initially urging viewers to get vaccinated for COVID-19. He then revealed it was a joke and denied being vaccinated himself, claiming, “You ain’t sticking me with that motherfucking needle. It’s the motherfucking flu. Get over it, okay?” He received backlash for these comments on social media, with many pointing out that his parents had contracted COVID-19 the previous year and publicly encouraged others to get vaccinated as a result.

In the summer of 2020, Chet Hanks posted on Instagram in support of the Black Lives Matter movement. That October, he announced a social media hiatus, citing “pro-Trump conspiracy theorists” targeting his family. QAnon believers had falsely accused his father of pedophilia and Satanic activity that year. Following his return to Instagram earlier in the month, he posted a video, insulting Donald Trump on November 7, the day that news outlets called the 2020 United States presidential election for Joe Biden.

Chet Hanks is currently not married. As of May 2022, his wife is unknown to the general public. However, Hanks has a daughter, Micaiah Hanks, born in April 2016, with former partner Tiffany Miles. Hanks credits his daughter and his parents for helping him to overcome his struggles with substance abuse. Along with his parents, Hanks was granted Greek citizenship in 2020 in recognition for his parents’ work raising awareness for the 2018 Attica wildfires.

How much is Chet Hanks worth? Chet Hanks net worth is estimated at around $4 million. His main source of income is from his career as an actor, singer, and songwriter. Hanks successful career has earned him some luxurious lifestyles and some fancy cars trips. He is one of the richest and influential actors in the United States.

“NDC Caucus Is Frustrating Us In Parliament”— Afenyo Markin Cries

23/01/2021
The leadership of NPP Caucus in Parliament is accusing the NDC caucus of attempting to frustrate government business in the House. Member of Parliament for...

How to Invest in Real Estate With No Money

21/08/2021
ABOUT US
Our Motive is to provide reliable, accurate and informative news to you. The Urban and Rural at heart ❤️
Contact us: [email protected]
FOLLOW US
© Apumone 2022 All Rights Reserved
Go to mobile version