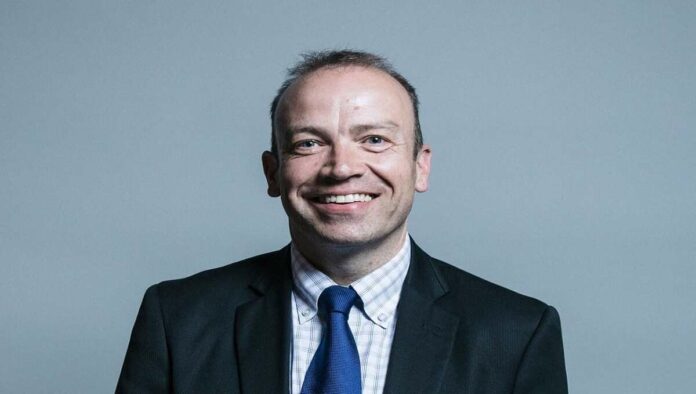 Chris Heaton-Harris is an English Conservative Party politician serving as Government Chief Whip of the House of Commons and Parliamentary Secretary to the Treasury since 2022. He has served as the Member of Parliament (MP) for Daventry since 2010. He was the Minister of State for Europe under Foreign Secretary Liz Truss from 2021 to 2022 and Chairman of the European Research Group (ERG) from 2010 to 2016.

Christopher Heaton-Harris MP was born on November 28, 1967 (age 54 years) in Epsom, United Kingdom. He attended the Tiffin School in Kingston upon Thames. He attended Wolverhampton Polytechnic, which in 1992 became the University of Wolverhampton. He worked for the family business at New Covent Garden Market, before taking over from his father running What4 Ltd for eleven years. At the 1997 general election, he unsuccessfully contested the constituency of Leicester South. He again unsuccessfully contested the seat in the 2004 Leicester South by-election.

Chris Heaton-Harris was elected to the European Parliament in 1999 as MEP for the East Midlands and was re-elected in 2004. He was the Chief Whip of the Conservatives in the European Parliament from 2001 to March 2004. Heaton-Harris sat on the Internal Market Committee, responsible for “co-ordination at the Community level of national legislation in the sphere of the internal market and of the customs union”, as well as the Central America Delegation and the Bulgaria Delegation.

Check Out: Liz Tuss net worth

He was responsible for bringing the case of Marta Andreasen, the European Commission’s Chief Accountant, to public attention in August 2002 and has been involved in fighting fraud, mismanagement and waste within the European Commission and other European institutions. Immediately prior to standing down in 2009, Heaton-Harris was the President of the Sports Intergroup, a group of approximately 40 MEPs who have an interest in sports and sporting issues.

In May 2006, Chris Heaton-Harris sought support within the European Union legislature for a letter to FIFA demanding that the Iranian national football team be thrown out of the 2006 World Cup because of then Iranian President Mahmoud Ahmadinejad’s comments about the Holocaust being a lie. Heaton-Harris describes himself as a “fierce Eurosceptic”.

Chris Heaton-Harris was a member of the Conservative A-List and was selected to succeed Tim Boswell as a candidate for the safe Conservative constituency of Daventry in June 2006. He won the seat in the 2010 general election with a majority of 19,188. In March 2012, Heaton-Harris was reported as being one of the Conservative MPs to have spoken critically of Party Co-Chairman Sayeeda Warsi at a meeting of the 1922 Committee, following Warsi’s handling of Roger Helmer MEP’s defection to UKIP.

After the resignation of Boris Johnson and the following domino resignations of Conservative ministers, on 9 July 2018 Heaton-Harris was appointed as one of three Parliamentary Under-Secretaries of State at the Department for Exiting the European Union. On 8 February 2022, he was appointed as Chief Whip of the Conservative Party. He was subsequently sworn into the Privy Council.

Chris Heaton-Harris accepted tickets for himself and his family to attend four events at the London 2012 Olympics relating to swimming, diving, gymnastics, and the closing ceremony, as a gift from Coca-Cola. The value of the gifts (£11,750) was the highest amount received by any MP. He declared them in the Register of Members’ Interests. Heaton-Harris received tickets worth £1,961 to the England v Germany game at the 2020 UEFA European Football Championship from Power Leisure Bookmakers.

In November 2012, covert video footage of Heaton-Harris discussing the role of James Delingpole in the Corby by-election was published on the website of The Guardian. The recording, made by Greenpeace, appeared to show the MP’s support for Delingpole’s independent, anti-windfarm candidacy, at a time when Heaton-Harris was engaged by the Conservatives to run the unsuccessful campaign of their own candidate, Christine Emmett.

Chris Heaton-Harris indicated that this was linked to a plan by core members of the Conservative Party to emasculate the Climate Change Act by making its commitments advisory rather than mandatory. After Heaton-Harris apologized for the impression he gave in the video, Home Secretary Theresa May said he was guilty only of silly bragging, while Labour’s Michael Dugher MP urged Prime Minister David Cameron to show leadership and punish him. The Corby by-election was subsequently lost by the Conservatives with a swing to Labour of 12.8 percent.

In October 2017, the Eurosceptic Heaton-Harris wrote to the vice-chancellors of every university in the UK, requesting the names of academics lecturing on Brexit and copies of all course material, leading to claims of political interference in academic freedom, as well as censorship. The move was described as “McCarthyite” by Professor Kevin Featherstone, head of the European Institute at the London School of Economics, and “sinister” by Professor David Green, the vice-Chancellor of Worcester University who likened it to Newspeak and the Thought Police from George Orwell’s Nineteen Eighty-Four: the Dean of Durham Law School, Thom Brooks, called it “dog-whistle politics at its worst”, while Lord Patten, Chancellor of Oxford University, called the letter an act of “idiotic and offensive Leninism”. In addition, the letter attracted criticism from both pro-Remain and pro-Leave academics at Cambridge and London’s Queen Mary universities, and a rebuke from Downing Street.

Responding the next day to the widespread criticism from both politicians and academics, universities minister Jo Johnson suggested that Heaton-Harris might have been researching a possible book on “the evolution of attitudes” to Europe, rather than acting in his role as a government minister, and “probably didn’t appreciate the degree to which (the letter) would be misinterpreted”, although there was no mention of any research for a possible book in the original letter. On 17 February 2019, Heaton-Harris said that there had never been any plans for a book.

Check Out: Michael Ellis net worth

Chris Heaton-Harris chaired the European Research Group (ERG), a group of Eurosceptic MPs, from 2010 until November 2016. Subscriptions totaling £13,850 were claimed as a parliamentary expense. At the same time, he sat on the wide-ranging powers of the European Scrutiny Committee, set up to assess the legal and/or political importance of draft EU legislation.

Documents from the House of Commons catering department released via Freedom of Information to openDemocracy, show Heaton-Harris hosted an ERG breakfast meeting in October 2017, despite taking over as a government whip in July 2016. Continuing to chair the group while he was a member of the government led to an accusation of violating the Ministerial Code, section 7.12 of which states: “Ministers should take care to ensure that they do not become associated with non-public organizations whose objectives may in any degree conflict with Government policy and thus give rise to a conflict of interest.” However, a government spokesperson stated that they did not view it as a breach. Heaton-Harris was also accused of violating the ministerial code after having met with the Spanish far-right political party Vox and discussing Brexit.

Chris Heaton-Harris is married to Lorna Heaton-Harris, they had their wedding in England. His wife is a private person and they have two children. However, He is a qualified football referee. He stands at an appealing height of 1.74m and has a good body weight which suits his personality. As of mid-2022, Heaton-Harris and his wife Lorna are still married and living a happy life with each other without any problems, tension and misunderstanding.