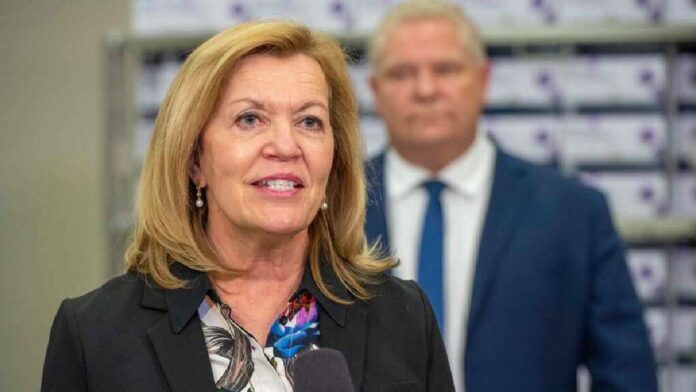 Read the complete write-up of Christine Elliott net worth, age, husband, children, height, family, parents, siblings, politics as well as other information you need to know.

Christine Elliott is a Canadian politician in Ontario who is serving as the 11th and current deputy premier of Ontario and Ontario minister of health since June 29, 2018. She was elected to represent the riding of Newmarket-Aurora in the 2018 Ontario general election. She is the widow of former Canadian Minister of Finance Jim Flaherty under former Conservative Prime Minister Stephen Harper (2006–2014). Eliott served as Ontario PC Party Deputy Leader from 2009 to 2015 under Tim Hudak. She was the runner-up in both the 2015 and 2018 PC party leadership races and placed third in the 2009 race.

Elliott was a Progressive Conservative member in the Legislative Assembly of Ontario from 2006 to 2015. She represented the ridings of Whitby—Ajax, and Whitby—Oshawa, east of Toronto. Elliott was a candidate in the 2009 Progressive Conservative leadership election and came in third place behind winner Tim Hudak and runner-up Frank Klees. She was appointed as the party’s deputy leader in 2009. She was a candidate for the 2015 leadership election but lost to former federal MP Patrick Brown.

Following her second loss, Elliott resigned her seat in the legislature and was appointed as Ontario’s first Patient Ombudsman by then-Ontario Minister of Health and Long-Term Care Eric Hoskins, serving until she stepped down to make her third bid for the Ontario PC Party leadership. In that contest, Elliott won the most votes and ridings but lost the contest to Doug Ford. She then received the nomination to run for the riding of Newmarket-Aurora and was elected on June 7, 2018, as the PC Party won the election.

Christine Janice Elliott MPP was born on April 13, 1955 (age 67 years) in Oshawa and grew up in Whitby. She attended the University of Western Ontario where she received her honors Bachelor of Arts degree in history. She graduated from Western Law School and received her Bachelor of Laws degree in 1978.

Elliott was called to the Ontario Bar in 1980. She started off her career as a bank auditor for one of Canada’s largest banks. She was a founding member and partner of the Whitby law firm Flaherty Dow Elliott & McCarthy, where she practiced in real estate, corporate/commercial, and estate law.

She received Whitby’s Peter Perry Award, an annual recognition of Whitby’s outstanding citizen. Prior to that, she became a Rotary International Paul Harris Fellow in recognition of her pro bono legal work. She is the co-founder and director of the Abilities Centre (a facility for those with special needs), a director and past chair of Grandview Children’s Centre, and a director of the Lakeridge Health Whitby Foundation.

Christine Elliott was board president of the Durham Mental Health Services (DMHS), which named one of their group homes in her honor (Elliott House). She is a director of Legacy Private Trust and has been a director of the Leukemia & Lymphoma Society and the Toronto Symphony Orchestra.

Elliott entered the leadership race to succeed former leader John Tory on April 4, 2009. She portrayed herself as a centrist alternative to her three right-wing opponents—Hudak, Klees, and Randy Hillier. During her announcement, she criticized her main rival Tim Hudak. She said, “He really wants to replicate some of the campaigns and some of the solutions that worked in the 1990s. What happened in 1995 is not the solution for 2009.”

She said that as a leader, she would push for a “sector-by-sector” innovation strategy for Ontario. She also said that she supports nuclear energy and that the Liberal’s green energy plan was insufficient for Ontario’s needs. At the leadership convention on June 28, 2009, in Markham, Ontario, Elliott placed third in the results behind winner Tim Hudak and runner-up Frank Klees.

Elliott became the party’s Deputy Leader from 2009 until her resignation in 2015. On June 25, 2014, Elliott announced she would seek the leadership of the party for a second time. She had the support of at least nineteen of the twenty-eight caucus members but lost to Brown on May 9, 2015, in a two-person race with 38% of the vote. She resigned her seat in the legislature on August 28, 2015, one week before Brown’s election to the provincial parliament.

On December 10, 2015, Christine Elliott was appointed by Minister of Health and Long-Term Care Eric Hoskins as Ontario’s first Patient Ombudsman effective as of July 1, 2016. The duties of the non-partisan position included acting on behalf of patients who have not had their issues resolved through normal complaint resolution processes. She said, “Ensuring that patients in Ontario’s health-care system will now have a strengthened voice is a responsibility I am looking forward to taking on.” On February 1, 2018, Elliott resigned as Patient Ombudsman to enter the Ontario PC Party leadership election.

Christine Elliott officially announced she was running for leadership on February 1, 2018, via Twitter, to replace Patrick Brown who had resigned as leader after sexual misconduct allegations were made against him. Her campaign slogan was “Ready. Now.” and her leadership campaign has focused on her experience compared to the other candidates.

Elliott stated she supported the “People’s Guarantee” (the existing platform adopted by the PC Party in November 2017) with the exception of a carbon tax, which she opposed. She had the most support from the Ontario PC caucus of any leadership candidate in the race. On March 10, she was eliminated on the third and final ballot of the leadership election, which was won by Doug Ford.

She had the most votes and had won the most ridings but did not have the most points and therefore came in second. She initially refused to concede to Ford, citing “serious irregularities” in the race, and vowed to “investigate the extent of this discrepancy”. However, she conceded to Ford the next day and announced her support for him as party leader.

Christine Elliott announced on April 2, 2018, via Twitter her intention to seek the PC candidate nomination for the provincial riding of Newmarket-Aurora. The original PC candidate, Charity McGrath, was disqualified by the PC Party’s provincial nomination committee (PNC) amid complaints that she’d signed up riding association members without their knowledge.

On March 15, 2018, the PNC voted unanimously to bar McGrath from standing for the party in any riding for the 2018 election. Elliot won the election on June 7, 2018, and her party formed a majority government during the 42nd Parliament of Ontario. Premier Ford appointed Elliot appointed to be Deputy Premier and Ministry of Health and Long-Term Care in the Executive Council of Ontario.

On July 26, 2018, under Premier Ford, Christine Elliott has increased the provincial mental health budget from $3.8 billion annually by an additional $3.8 billion over a ten-year period (with half of the increase in funds coming from the federal government).

Elliott has been overseeing the response to the COVID-19 pandemic in Ontario. Elliot was an active member of Doug Ford’s Cabinet who provided front-line health care workers with financial relief and recognition through pandemic pay.

Christine Elliott was married to former Finance Minister Jim Flaherty until his death on April 10, 2014. She gave birth to their triplet sons John, Galen, and Quinn in 1991. She lived in Whitby with her sons until 2015 when she moved to Toronto to be closer to her job as Patient Ombudsman. Her son Galen Elliott used to work for Doug Ford, then Etobicoke councilor. Elliott and Flaherty have both championed issues surrounding disabled children; their son, John Elliott, has a disability.

How much is Christine Elliott worth? Christine Elliott’s net worth is estimated at around $5 million. Her salary for 2022 ranges from $162,574 to $475,483, but with bonuses, benefits, and various other compensation, she made significantly more than her salary in the year 2020. Her main source of income is from her career as a politician. Elliott’s successful career has earned her some luxurious lifestyles and some fancy cars trips. She is one of the richest and most influential politicians in Canada.