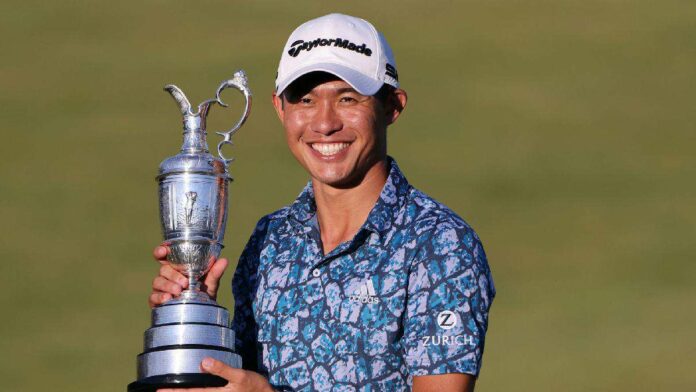 Read the complete write-up of Collin Morikawa net worth, age, wife, children, height, family, parents, PGA golf as well as other information you need to know.

Collin Morikawa is an American professional golfer who plays on the PGA Tour and European Tour. He began his PGA Tour career with 22 consecutive made cuts, second only to Tiger Woods’ 25-cut streak. He also became the first American to win the Race to Dubai on the European Tour.

Morikawa has five PGA Tour wins – including two major championships, the 2020 PGA Championship and the 2021 Open Championship, winning both on his debut. In May 2018, Morikawa spent three weeks as the top-ranked golfer in the World Amateur Golf Ranking.

Morikawa played collegiate golf at the University of California, Berkeley, from 2015 to 2019, winning five times, including the 2019 Pac-12 Championship. Aside from his collegiate wins, he won the Western Junior, Trans-Mississippi Amateur, Sunnehanna Amateur and the Northeast Amateur. He played on the winning Arnold Palmer Cup team in 2017 and 2018, the winning Walker Cup team in 2017 and the Eisenhower Trophy team in 2018 that finished second by one stroke.

Collin Morikawa made his debut as a professional at the 2019 RBC Canadian Open, where he tied for 14th place. On July 7, Morikawa tied for second at the 3M Open. On July 14, he tied for 4th at John Deere Classic. With that finish, Morikawa secured PGA Tour membership for the 2019–20 season. Morikawa then won his first PGA Tour event two weeks later, at the Barracuda Championship – beating Troy Merritt by three points.

Morikawa tied for the lead of the 2020 Charles Schwab Challenge after 72 holes on June 14, 2020. This was the first PGA Tour tournament played after a three-month hiatus due to the COVID-19 pandemic. Morikawa missed a short par putt on the first playoff hole to lose to Daniel Berger.

He missed his first cut on the PGA Tour at the Travelers Championship on June 26, 2020, ending a streak of 22 consecutive made cuts, the second-longest streak to start a professional career to the 25 made by Tiger Woods.

On July 12, Morikawa beat Justin Thomas in a playoff to win his second PGA Tour title at the Workday Charity Open. The win was the first non-alternate PGA Tour victory for him. Morikawa rallied from a three-shot deficit with three holes remaining and made a 25-foot birdie putt on the first playoff hole to stay alive, before winning with a par on the third playoff hole.

Collin Morikawa finished in a tie for 3rd place at the Olympic Games in August 2020. He lost in a 7-man playoff for the bronze medal.

Check Out: Bryson DeChambeau net worth

Morikawa played on the U.S. team in the 2021 Ryder Cup at Whistling Straits in Kohler, Wisconsin in September 2021. The U.S. team won 19–9 and Morikawa went 3–0–1 including a tie in his Sunday singles match against Viktor Hovland.

In February, Collin Morikawa shot a final-round 65 at the Genesis Invitational to finish tied second; two shots behind Joaquín Niemann.

Collin Morikawa is currently engaged to his long-time girlfriend, Katherine Zhu. His soon-to-be wife Katherine Zhu is a private and fashion enthusiast. On April 1, 2022, Morikawa promised to have their marriage ceremony before their 6th anniversary in dating. The couple lives in a beautiful house in Las Vegas, Nevada. Morikawa is not gay as earlier alleged in his amateur days.

How much is Collin Morikawa worth? Collin Morikawa net worth is estimated at around $8 Million. His main source of income is from his career as a professional golfer. Morikawa successful career has earned him some luxurious lifestyles and some fancy cars trips. He is one of the richest and most influential golfers in the United States.