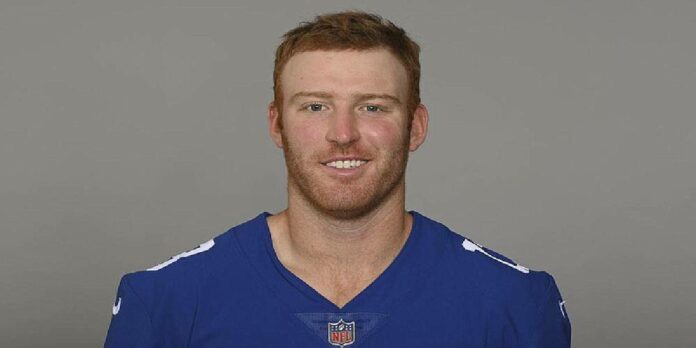 Cooper Rush is an American football quarterback for the Dallas Cowboys of the National Football League (NFL). He played college football at Central Michigan University and was signed by the Cowboys as an undrafted free agent in 2017.

Cooper Rush was born on November 21, 1993 (age 27 years) in Charlotte, Michigan, United States. He is the son of Frances Rush and Matthew Rush. He attended Lansing Catholic High School in Lansing, Michigan with an enrollment of just over 500 students, where he became a three-year starter at quarterback for the football team. He also practised basketball and baseball (until his freshman year).

In 2010 and 2011, he led his team to back-to-back undefeated regular seasons. In 2011, he led his team to the state runner-up title. In Division 5 regional championship game against Dowagiac Union High School, he set Michigan state records with 5 touchdown passes in one quarter and 8 for the game. The team would end up losing in the finals against Powers Catholic High School 26–56, even though he registered 300 passing yards and 3 touchdowns.

Cooper Rush accepted his only football scholarship offer, which came from Central Michigan University, where he became a four-year starter at quarterback. In his redshirt season, he was named the school’s Scout Team Player of the Year. As a freshman, although he began the season as the third-string quarterback, he was named the starter by the third game, after Cody Kater was injured (collarbone fracture) and his backup Alex Niznak couldn’t move the offence against the University of New Hampshire.

In that contest he came in the second quarter and helped engineer a 24–21 come from behind victory, where he tallied 326 passing yards and 3 touchdowns, tying the school record for the longest in history (97 yards). He would never relinquish the position or miss a start after the game.

As a sophomore, Cooper Rush played in the 2014 Bahamas Bowl against Western Kentucky. By the middle of the third quarter, his team had fallen behind 49–14, but scored 4 unanswered touchdowns and were down by only 7 points near the end of the fourth quarter. With one second remaining in the contest, Central Michigan had the ball on their own 25-yard line.

The would-be final play started with a 45-yard Hail Mary pass from Rush to wide receiver Jesse Kroll. As Kroll was being tackled he lateraled the ball to teammate Deon Butler, who ran 20 yards before lateraling to Courtney Williams. With no space to run, Williams made a quick third lateral pass to leading receiver Titus Davis who ran the final 13 yards, scoring a touchdown that would have tied the game with a kicked extra point and sent the game into overtime, but instead Central Michigan attempted a two-point conversion for the win, which was unsuccessful. Had the try succeeded, it would have marked the largest comeback in bowl history and tied the largest comeback in any Division I game. His seven touchdown passes set an all-time record for all bowl games.

Cooper Rush best season came as a junior in 2015, through the first 13 games he had 3,703 passing yards, which was a new school single-season record. He completed 66.3 per cent of his passes for 3,848 total passing yards, 25 touchdowns, and 11 interceptions.

As a senior, his production dropped to 3,540 passing yards, 23 touchdowns, but with 16 interceptions and a low 59.8 completion percentage. Against Oklahoma State University, the game sparked controversy after the officials made an incorrect call that would eventually give Central Michigan the win. Oklahoma State threw the ball away to end the game and received a penalty for intentional grounding. Under college football rules, the game would have ended and Oklahoma State would have won the game.

However, the officials gave Central Michigan an untimed down, and Rush threw a 51-yard Hail Mary pass to wide receiver Jesse Kroll, who made a lateral to fellow receiver Corey Willis at the 12-yard line, running for a touchdown with no time remaining for a 30–27 win. The team lost 55–10 to Tulsa in the 2016 Miami Beach Bowl at the end of the season.

Coming out of Central Michigan, Cooper Rush was projected by the majority of NFL draft experts and analysts to be a seventh-round pick or a priority undrafted free agent. On December 6, 2016, it was announced that Rush had accepted his invitation to the East-West Shrine Game. On January 21, 2017, Rush performed in the East-West Shrine Game for the East and completed 11 of 17 pass attempts for 97-yards in a 10–3 loss to the West.

Cooper Rush received an invitation to the NFL combine and performed almost all of the required drills except for the bench press. He had an underwhelming lacklustre performance and had some of the lowest marks at the combine. On March 20, 2017, Rush participated at Central Michigan’s pro day and chose to attempt the vertical jump, broad jump, short shuttle, and three-cone drill once again.

Cooper Rush was signed as an undrafted free agent by the Dallas Cowboys after the 2017 NFL Draft on May 12. As a rookie, he initially competed with Zac Dysert in training camp for the job as the third-string quarterback. After Dysert suffered a herniated disc, the Cowboys signed Luke McCown to replace him on the roster.

Following multiple productive preseason performances in the Hall of Fame Game and the next two contests, he began to share second-team reps in practice with backup quarterback Kellen Moore before the preseason game against the Oakland Raiders. During the contest, he was given most of the time with the second-team offence and completed 12 of his 13 attempts for 115-yards and two touchdowns in a comeback 24–20 victory.

Cooper Rush finished the preseason with a total of 38 pass completions out of 51 attempts, 398 passing yards, and six touchdown passes with no interceptions. Head coach Jason Garrett named Rush the Cowboys’ third quarterback on their depth chart, behind Dak Prescott and Moore. Rush did not dress for the first five games and was a healthy scratch.

Rush was promoted to second-string for the sixth game of the season, with Moore being released and signed to the Cowboy’s practice squad. In Week 7, in the 40–10 victory over the San Francisco 49ers, he appeared late in the game in relief of Prescott. He was 1-of-3 passing for 2 yards and had 2 rushes for 13 yards in his NFL debut.

He was the backup at quarterback from the start of organized team activities in 2018, as he never received any strong competition from rookie Mike White. He only played in the sixth game against the Jacksonville Jaguars, closing out a 40–7 win in the fourth quarter, where he only handed the ball to the running backs.

In 2019, he wasn’t challenged for the backup quarterback role, so the Cowboys decided to keep only 2 quarterbacks on the roster, releasing White at the end of the preseason. He only played in the season opener against the New York Giants and in the fourteenth game against the Los Angeles Rams. He did not have any pass attempts while closing out the two wins in the fourth quarter.

On March 18, 2020, Rush re-signed with the Cowboys on a one-year restricted free agent tender. On May 4, Rush was waived by the Cowboys after the team signed former Cincinnati Bengals quarterback Andy Dalton.

New York Giants: On May 5, 2020, Cooper Rush was claimed off waivers by the New York Giants, reuniting with offensive coordinator Jason Garrett, who was his head coach with the Cowboys. On September 5, 2020, he was waived and signed to the practice squad the next day. On September 29, 2020, Rush was released from the Giants practice squad to make room for another former Cowboys quarterback (Clayton Thorson).

On October 31, 2020, Rush was signed to the Dallas Cowboys’ practice squad, to provide depth after starter Dak Prescott suffered a season-ending ankle injury. He was elevated to the active roster on November 7 for the team’s Week 9 game against the Pittsburgh Steelers and reverted to the practise squad after the game. He signed a reserve/future contract with the Cowboys on January 4, 2021.

Cooper Rush was named the starter for the Cowboys Week 8 game against the Minnesota Vikings after Prescott was out with a calf injury. It was Rush’s first start since entering the NFL. The Cowboys would go on to win the game 20–16 with Rush throwing for 2 touchdowns, including the game-winner in the final minute to Amari Cooper.

Cooper Rush is married to his longtime girlfriend Lauryn Rush. Cooper and his wife Lauryn Rush have one daughter together. Cooper, his wife and daughter live in a private house in Dallas, Texas.

How much is Cooper Rush worth? Cooper Rush net worth is estimated at around $7 million. His salary is around $750,000 and his main source of income is from his career as an American football player. Cooper Rush successful career has earned him some luxurious lifestyles and some fancy cars. He is one of the richest NFL players in Michigan.