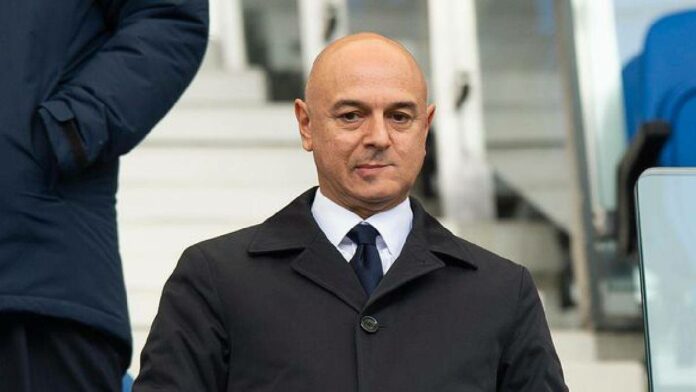 Daniel Levy is a British businessman who is the current chairman of Premier League football club Tottenham Hotspur. He has held this post since 2001, making him the longest-serving chairman in the Premier League.

Daniel Philip Levy was born on February 8, 1962 (age 60 years) in Essex, United Kingdom. He is the son of a Jewish parent. His father Barry Levy was the owner of a clothing retail business Mr Byrite (later rebranded as Blue Inc). He is a lifelong Tottenham Hotspur supporter and attended his first match at White Hart Lane against QPR in the 1960s. He studied Economics and Land Economy at Sidney Sussex College, Cambridge, and graduated in 1985 with a First Class Honours Degree.

Daniel Levy went into his family business, Mr Byrite. He was also involved in property development, as well as a number of other businesses after graduating. He then formed a business association with Joe Lewis, and became involved in an investment trust called ENIC International Ltd that specialized in sports (football in particular), entertainment and media. He was made the managing director of ENIC in 1995. Levy and his family own 29.4% of the share capital of ENIC, while Lewis owns 70.6%.

Levy became a director of the Scottish football club Rangers, in which ENIC held a significant stake until 2004. ENIC also held stakes in other European football clubs including AEK Athens, Slavia Prague, FC Basel and Vicenza (but all since sold), as well as non-football companies such as Warner Bros Restaurants and a Cambridge software company, Autonomy. He became chairman of Tottenham Hotspur in 2001.

Daniel Levy made an attempt to buy Tottenham Hotspur from Alan Sugar in July 1998 but failed. Another attempt was made in July 2000 but that was again rejected, however, increasing hostility by fans towards Sugar eventually persuaded Sugar to sell. Levy was then appointed to the board of Tottenham Hotspur on 20 December 2000 after ENIC initiated the purchase of a 27% stake in the club from Sugar for £22 million bringing their total stake to 29.9%, maximumly permissible before ENIC had to bid for the entire company.

Levy replaced Sugar as chairman of Tottenham Hotspur in February 2001 on the completion of the sale and took over the day-to-day running of the club in October 2001. ENIC would eventually substantially increase their shareholding and gain control of the company after buying the remaining shares off Sugar in 2007 for £25m, as well as those of other shareholders, eventually acquiring 85.55% of Tottenham. ENIC moved the club into private ownership in 2012. Levy became the highest-paid Premier League chief executive, with an annual remuneration of over £6 million in the 2016–17 season.

Check Out: Alan Sugar net worth

The first manager appointed with Levy at the helm was Glenn Hoddle in 2001. Hoddle however was sacked following a poor start to the 2003–04 season in September 2003. He was followed in quick succession by Jacques Santini and Martin Jol. Jol had some success moving Tottenham out of the mid-table but was dismissed in the 2007–08 season after the team only won one game in the first ten games.

Juande Ramos succeeded as head coach in 2008. He delivered the League Cup, the first trophy under Levy’s stewardship and the club’s first in nine years, but Levy made the decision to replace him with Harry Redknapp on 25 October 2008 after Ramos made the worst start to a league campaign in the club’s history in the 2008–09 season. Redknapp guided Spurs to a top-four finish in the 2009–10 season, winning their entry into the qualification round of the UEFA Champions League for the first time.

Tottenham reached the knock-out stages in the 2010–11 UEFA Champions League but eventually lost to Real Madrid. Tottenham finished fifth in the Premier League in the 2010–11 season, missing out on Champions League qualification but securing a place in the Europa League. On 13 June 2012, Redknapp was relieved of his duties after failing to agree on terms for a new deal.

Daniel Levy appointed former Chelsea and Porto boss Andre Villas-Boas as the team’s new head coach on July 3, 2012. Following some poor results in the first half of the 2013–14 season, including a 5–0 home defeat by Liverpool, Levy sacked Villas-Boas on 16 December 2013. Head of Football Development and former player Tim Sherwood was subsequently announced as head coach, but he also left at the end of the season.

Levy appointed Southampton manager Mauricio Pochettino as head coach on May 27, 2014. The team reached the 2015 Football League Cup Final in Pochettino’s first season in charge which also saw a number of the club’s academy players step up to establish themselves in the first team, including Harry Kane, Danny Rose, Ryan Mason, Nabil Bentaleb and Andros Townsend. His team qualified for Europe with a fifth-place finish in 2014–15 before challenging for the Premier League title in the 2015–16 and 2016–17 seasons with a squad consisting of the youngest average age in the division.

They also achieved their best ranking in 2016–17 since the 1962–63 season under Bill Nicholson. The team has been ranked among the top 4 since the 2015–16 season, allowing them to qualify and participate in the Champions League since 2016–17. They reached the final for the first time in 2018–19, but lost to Liverpool in the 2019 UEFA Champions League Final.

On 19 November 2019, Pochettino was sacked as manager of Spurs and was replaced the following day by José Mourinho. However, after only 17 months on the job, Mourinho was sacked on 19 April 2021 after a spate of losses and a disappointing second half of the 2020–21 season.

On 30 June 2021, Levy appointed Nuno Espírito Santo as the head coach for Tottenham on a two-year deal. Espírito Santo was sacked on 1 November 2021 following a run of poor results which saw Tottenham lose four in six Premier League games. On 2 November 2021, Levy appointed Antonio Conte as head coach on an 18-month deal, with an option to extend.

In 2012, the Club moved to its new training base set in 80 acres of greenbelt land. Planning and construction of the facility took over seven years and a player accommodation Lodge was added later. The Brazil National team stayed at the Lodge to prepare for the 2018 World Cup.

Daniel Levy oversaw the construction of a new stadium next to the White Hart Lane site, from its design to the construction. The Northumberland Development Project was announced in 2008, with the building of a new club stadium at its centerpiece. After some delay, the construction of the Tottenham Hotspur Stadium started in 2015. The stadium was designed with an initial capacity of 62,062, making it the largest club stadium in London and the second largest in the country. The project is intended to be a catalyst for the regeneration of Tottenham to bring new jobs and homes to the area.

Levy negotiated the club’s move to Wembley Stadium for one year for the 2017-2018 season to allow demolition of White Hart Lane and the completion of a new stadium on the same site as White Hart Lane. During their time at Wembley, the club also broke the Premier League attendance record several times, as well as the Champions League attendance record for a British club.

The construction officially opened on 3 April 2019 branded as Tottenham Hotspur Stadium. It includes the world’s first dividing retractable pitch to accommodate other leading sports, notably American football, and entertainment events. The design allowed the club to agree on a ten-year deal to host NFL matches at their new home from 2018. The stadium is reported to have cost £1.2 billion, and financial analysis in February 2021 indicated that construction of the stadium is largely responsible for burdening Tottenham with a £1.177 billion debt, the biggest debt of all European clubs.

Levy has described the spending by other clubs in the Premier League as unsustainable. In the 2017–18 season, Tottenham made a profit of £113 million (£138.9m pre-tax), a world record for a football club. The club was valued at around £80 million when ENIC first attempted to buy a stake in 1998, and by 2019, valuations of the club have ranged between £1.3–1.8 billion.

He is the chief negotiator in the transfer of players for Tottenham. He has acquired a reputation for tough negotiation in the club’s transfer dealings; former Manchester United manager Sir Alex Ferguson described negotiating with Levy over the transfer of Dimitar Berbatov as “more painful than my hip replacement”. In 2013, Levy negotiated a then world-record fee of £86 million for the transfer of Gareth Bale to Real Madrid.

Check Out: Claude Littner net worth

Levy is particularly known for his last-minute dealings on the last day of the transfer window, with notable examples including the signings of Rafael van der Vaart and Hugo Lloris. He is also known to target young players, in the hopes of developing them into major stars; this strategy has seen such successes as Gareth Bale, Christian Eriksen, Son Heung-min, and Dele Alli.

Daniel Levy has been criticized by Tottenham supporters and pundits alike for not investing more money in the transfer market; in the first four years of Pochettino’s tenure as Spurs manager, the club had a net spend of £29 million on transfer fees, considerably lower than the other major clubs in the same period. In 2018, Tottenham became the first Premier League club to make no signings during a summer transfer window.

Levy has been instrumental in attracting corporate partners to the club in multi-million-pound sponsorship deals including current partners Nike and AIA. He negotiated multiple shirt sponsorships in 2010 when he agreed on a deal with software infrastructure company Autonomy as the club’s shirt sponsor in the Premier League, with Investec becoming shirt sponsor for Champions League and domestic cup competitions.

He has also promoted governance issues related to the Premier League, most recently advocating enhanced financial controls for all owners to ensure the long-term financial stability of clubs. In 2007, he lobbied successfully for clubs to be allowed to name seven players on the substitute bench, in order to encourage the inclusion of young players; the change was ratified in February 2008.

Daniel Levy is married to Tracy Dixon. His spouse Tracy Dixon is an American actress, ex-Page 3 model, and his former PA. The couple has four children. In November 2017, Levy was named CEO of the Year at the Football Business Awards. Daniel Levy stands with an appealing height and has a good bodyweight that suits his personality.

How much is Daniel Levy worth? Daniel Levy net worth is estimated at around $420 million. His main source of income is from his career as the chairman of Premier League football club Tottenham Hotspur and shares in ENIC. Levy successful career has earned him some luxurious lifestyles and some fancy cars trips. He is one of the richest and influential businessmen in the United Kingdom.

10/10/2021
Read the complete write-up of Paul Fletcher net worth, age, birthday, height, family, wife, children, politics as well as other information you need to...

13/01/2022
ABOUT US
Our Motive is to provide reliable, accurate and informative news to you. The Urban and Rural at heart ❤️
Contact us: [email protected]
FOLLOW US
© Apumone 2022 All Rights Reserved
Go to mobile version