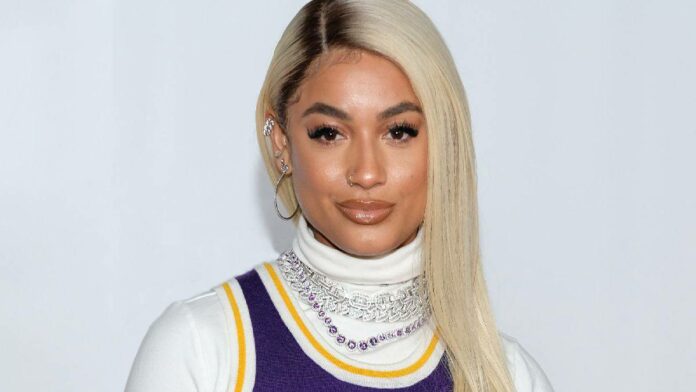 DaniLeigh is an American singer, songwriter, rapper, dancer, and choreographer. Initially appearing as a backup dancer, she began her career by posting covers of popular songs on YouTube before moving to Los Angeles, where she began choreographing for other artists and dancing.

She made a career breakthrough after working with Prince on the music video for his single “Breakfast Can Wait”. DaniLeigh was signed to Def Jam Records in 2017, releasing mixtapes and singles starting that year.

DaniLeigh whose real name is Danielle Leigh Curiel was born on December 20, 1994 (age 27 years) in Miami, Florida, United States. She is the daughter of Dominican parents Vicky Curiel and Vladimir Curiel. She was deeply interested in music during her youth and cites Missy Elliott, Aaliyah, Drake, and Rihanna as influences.

She started dancing at the age of 12 and singing at the age of 14, though she was initially too shy to sing in front of others until she received positive feedback. Though she started posting vocal covers of songs such as Musiq Soulchild’s “So Beautiful” on YouTube, her career did not officially start until she moved to Los Angeles, where she made connections and started off as a backup dancer to artists such as Pharrell Williams and Nelly Furtado. She also formed part of the pop duo Curly Fryz with her sister.

Check Out: DaBaby net worth

DaniLeigh was asked by Prince to direct the video for his single “Breakfast Can Wait” when she was 18 years old. Following the video’s success, Prince continued mentoring DaniLeigh until his death in 2016. She released her first single “D.O.S.E” in 2015, but her first successful single was “Play”, released in 2017. The single is an empowerment song for women and Latinos and features Mexican-American rapper Kap G.

After signing with Def Jam Records, she released her first EP, Summer with Friends, in 2017, followed up by The Plan in 2018. The latter features appearances by rappers YG, Lil Yachty, Lil Baby, and YBN Nahmir. She later released a few more singles such as “Lil Bebe”, which was remixed featuring vocals from Lil Baby, and “Easy”, which was remixed featuring vocals from singer Chris Brown.

In January 2021, the singer issued an apology after posting part of a song called “Yellow Bone” on social media, which was criticized for promoting colorism. On February 10, 2022, DaBaby and DaniLeigh’s brother, Brandon Bills fought in a bowling alley in LA.

DaniLeigh is currently single and not married. She has a daughter with rapper DaBaby. However, DaniLeigh incorporates elements of hip hop and Latin music into her primarily R&B-style music. DaniLeigh stands with an appealing height and has a good bodyweight that suits her personality.

How much is DaniLeigh worth? DaniLeigh net worth is estimated at around $2 million. Her main source of income is from her career as a singer, rapper, and songwriter. DaniLeigh successful career has earned her some luxurious lifestyles and some fancy cars trips. She is one of the richest and most influential singers in the United States.