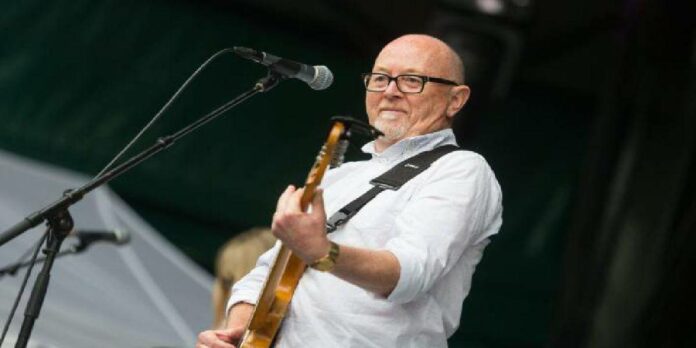 Dave Dobbyn is a New Zealand musician, singer, songwriter and record producer. In his early career, he was a member of the rock group Th’ Dudes and was the main creative force in the pop band DD Smash. Since then he has released the majority of his recordings as a solo performer.

Sir David Joseph Dobbyn KNZM was born on January 3, 1957 (age 64 years) in Auckland, New Zealand. He grew up in the working-class area of Glen Innes, Auckland, Dave is the third of five children to Terry Dobbyn and Molly Dobbyn. His father Terry Dobbyn was a tour bus driver. He was influenced by music from a young age, ranging from the Irish songs his father listened to, to the music of the church across the road, to the various radio stations he was able to pick up on the family radiogram.

While his family had a piano at home, he was the only member to not receive piano lessons, something he was grateful for in retrospect as it meant he was able to come to it without memories of strict lessons.

He and his three brothers attended the local Catholic college Sacred Heart College, where he would meet Ian Morris and Peter Urlich. While Sacred Heart actively encouraged music, Dobbyn was too shy to be involved, and on graduating high school worked nine months as a bank teller, and applied to teachers’ college twice, to be accepted on the second try. As he started teachers’ college he was asked by Morris and Urlich to join the band that would become Th’ Dudes.

Dave Dobbyn’s first success came with the rock band, Th’ Dudes, which he joined as guitarist. After performing with the band for a year, Dobbyn quit teachers’ college to focus on the band full-time. Dobbyn suffered extreme stage fright and played early performances standing at the back with his eyes closed. However, he took on the role of frontman for the song “Be Mine Tonight” (1978). The song won single of the year in 1979 in New Zealand and led to many critics seeing him as the breakout star of the band. The band’s 1980 song “Bliss” (1980) has become an iconic New Zealand drinking song.

After Th’ Dudes disbanded in 1980, Dobbyn formed pop group DD Smash. The band’s first release was the single “Lipstick Power”, followed by “Bull by the Horns” (1981), thought to be about Dobbyn overcoming the stage fright he sometimes experienced while performing with Th’ Dudes. Their first album Cool Bananas (1982) debuted in the New Zealand charts at number one.

After Treavaun, DD smash released Deep in the Heart of Taxes (1983), an album recorded live at Auckland’s popular eighties venue Mainstreet. Their final album, The Optimist (1984), although slicker sounding production-wise than its predecessor, showed signs of compromise with the dominant commercial, Blue-eyed soul-inflected, synthpop sound of the post-new wave era of British and Australian music which was flooding the New Zealand charts at the time. Dobbyn apparently had his eye on the larger Australian market and it was not long before he had a number one solo hit there.

In December 1984, DD Smash was playing an outdoor concert in Aotea Square in Auckland. During their set, a power failure led sections of the crowd to become restless. Some of the crowd started throwing beer bottles and police arrested them. The situation escalated and the riot squad was called in. Dobbyn made negative remarks about the police which allegedly spurred on the crowd.

The concert was stopped by the police and sections of the crowd rioted, smashing shop windows along Queen Street. Prime Minister David Lange called a commission of inquiry and as a result, Dobbyn was charged with inciting a riot. The criminal prosecution against Dobbyn began in June 1985. His lawyer successfully defended him and he was acquitted on the charge of “behaving in a manner likely to cause violence against person or property and using insulting language”.

When DD Smash eventually disbanded, partially to make room for the commercially expanding vision of Dobbyn, they left behind them the hit singles “Outlook for Thursday” (1983) and the violin-tinged, perennial classic “Whaling” (1984).

When DD Smash folded, Dobbyn began a successful solo career, by writing the soundtrack music for the animated feature film Footrot Flats: The Dog’s Tale in 1986. The film yielded two hit singles: “You Oughta Be In Love” (1986) and the chart-topping “Slice of Heaven” (1986) recorded with the band Herbs. After the release of the film, “Slice of Heaven” became one of Dobbyn’s best-known songs, frequently used in tourism advertisements aired on Australian television that encouraged people to visit New Zealand. With the success of the song in Australia, Dobbyn settled in Australia.

In April 1987, a re-worked version of Dobbyn’s song “Slice of Heaven” was featured in a number of television commercials in Australia. Funded by the Australian Meat Industry Council (AMIC), the commercials promoted the Devon meat product by substituting the word “Heaven” for “Devon” in the chorus.

Dave Dobbyn released his debut solo album Loyal, a personal celebration of love and loyalty, in 1988. His follow-up was the Mitchell Froom-produced Lament for the Numb (1993), which included members of Elvis Costello’s one time backing band. The album was called “un-releasable” by Dobbyn’s record label at the time and was shelved for a year until its eventual release.

Check Out: Benee net worth

After nearly a decade in Australia, Dobbyn moved back to Auckland in the early 1990s, and made 1994’s Twist with fellow New Zealander and recently returned singer-songwriter Neil Finn, whose contribution Dobbyn stated: “was crucial to the sound of that record”. The twist is also notable for its inclusion of the Maori singer Emma Paki, who was popular in the country at the time of the album’s release.

In 1995 Dobbyn became one of the first musical performers in the world to simulcast a performance on the Internet. However, it was hindered by technical problems. He took on the role of producer in his fourth solo album, The Islander. The album received widespread popular and critical acclaim, reaching number 1 on the New Zealand charts. In 1999 Dobbyn joined Jan Hellriegel and Toi Iti to co-write “Read About It”, the theme song of the Duffy Books in Homes programme which is still performed by 100,000 children annually.

Dave Dobbyn’s hit song “Loyal” (1988) from his debut solo album Loyal (1988) was used as an anthem for Team New Zealand’s failed 2003 America’s Cup defence. He has also produced albums for Australian singer Grant McLennan and contributed to albums by Jenny Morris, Gyan Evans, Wayne Gillespie and Bic Runga. In 2000 Dobbyn toured New Zealand with Runga and Tim Finn. The tour was recorded and the live album, Together in Concert: Live (2000) was released soon after. The tour also included the lead-off song “Just Add Water” from his 2000 album Hopetown, a record Dobbyn has since referred to as “a cartoon album”.

In 2005, Dobbyn released his sixth solo album; Available Light. The album received popular and critical acclaim. In the same year, Dobbyn performed the lead single from Available Light, “Welcome Home” (2005) at the New Zealand Music Awards ceremony. During the performance, Ahmed Zaoui, who was appealing a security certificate issued due to alleged links to terrorist groups, appeared on stage with Dobbyn. The year 2008 saw Dobbyn release Another land. The album entered the NZ Top 40 Album Charts at Number 2 and remained in the charts for 6 weeks, eventually attaining Gold status.

In 2012 Dobbyn was part of the all-star lineup for the Flight of the Conchords charity single Feel Inside. The song debuted at number 1 on the New Zealand music chart and remained there for two weeks.

Check Out: Gin Wigmore net worth

In 2001 the Recording Industry Association of New Zealand (RIANZ) awarded Dobbyn a rare Lifetime Achievement Award as part of the 2001 New Zealand Music Awards. The award presenter Michael Glading, the managing director of Sony New Zealand, chose to forego a speech and instead read out the titles of the long list of Dobbyn’s hit songs.

Dave Dobbyn is married to his longtime girlfriend Anneliesje Dobbyn, they had their wedding in 1983. However, he met his wife Anneliesje at a Whangamata Dudes New Years’ show and married her in 1983. However, in October 2021, when Keith tweeted: “The unvaccinated will feel isolated and picked on So they bloody well should”, Dobbyn replied: “I thought we’re fighting COVID, not humanity.” His tweet attracted many backlashes from high profile people in New Zealand.

How much is Dave Dobbyn worth? Dave Dobbyn net worth is estimated at around $10 million. His main source of income is from his music career. Dobbyn’s successful career has earned him some luxurious lifestyles and some fancy cars. He is one of the richest singers in New Zealand. However, in 2001, a vote by members of APRA to find New Zealand’s Top 100 songs (what would eventually become Nature’s Best series) included 10 Dobbyn songs.

05/12/2021
ABOUT US
Our Motive is to provide reliable, accurate and informative news to you. The Urban and Rural at heart ❤️
Contact us: [email protected]
FOLLOW US
© Apumone 2022 All Rights Reserved