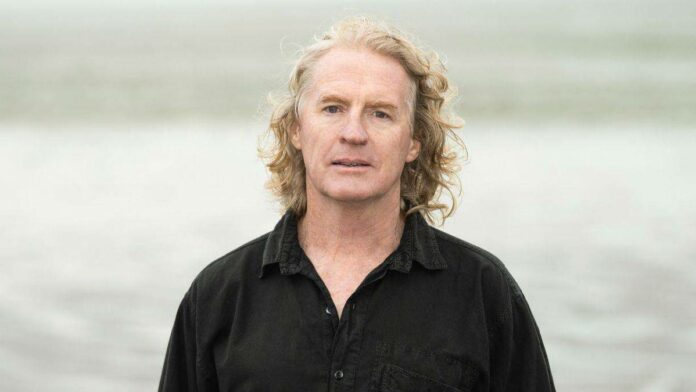 Don McGlashan is a New Zealand composer, singer and multi-instrumentalist who Is best known for membership in the band’s Blam Blam Blam, The Front Lawn, and The Mutton Birds, before going solo. He has also composed for cinema and television. Among other instruments, McGlashan has played guitar, drums, euphonium, and French horn.

McGlashan has played with the percussion group From Scratch, and bands The Bellbirds, The Plague, and composed pieces for New Zealand’s Limbs Dance Company. His first hits were with the band Blam Blam Blam in the early 1980s. He later released four albums as lead singer and writer for The Mutton Birds.

Donald McGlashan was born on July 18, 1959 (age 62 years) in Auckland, New Zealand. Both his parents were teachers: his father Bain taught civil engineering at Auckland Technical Institute and his mother Alice was a schoolteacher. McGlashan was actively encouraged to pursue music from a young age by his father, who bought him various musical instruments to learn on. McGlashan wrote “Envy of Angels” as a tribute to his father. At age seven McGlashan began on cello and piano, “then gradually added more instruments to that. I went through the tune-a-day for whatever instrument it was, for just about every instrument I think.”

McGlashan attended Westlake Boys’ High School, on Auckland’s North Shore. While at high school he began playing the keyboard in local bands. “I carried on sort of following those two strands – of learning how to write songs, learning how to be in a band, learning all the sort of extra-musical stuff that you have to learn – and on the other side I was learning the French horn.”

At Auckland University he studied English and music and played French horn and percussion in the Auckland Symphonia (later called the Auckland Philharmonia) from 1979 to 1982. McGlashan began working with Philip Dadson’s percussion group From Scratch in 1979 while playing in the Auckland Symphonia. McGlashan played a number of eclectic percussion instruments, such as PVC piping struck with jandals; the name of the group came from the fact that they produced their own instruments ‘from scratch’. On Standards, the album he jointly produced with Ivan Zagni for Propeller Records in 1982, he is credited as playing bass guitar, horn, whistle, percussion, marimba and vocals.

Check Out: Dave Dobbyn net worth

In 1981, McGlashan replaced Ian Gilroy in punk band The Whizz Kids, who rechristened themselves Blam Blam Blam. McGlashan’s song “Don’t Fight It Marsha, It’s Bigger Than Both of Us” reached #17 in the New Zealand charts. Local music magazine Rip It Up deemed it ‘best single of the year’, and readers voted McGlashan drummer of the year. In March 1985, a group formed for the purpose, Left, Right and Centre, released a single, “Don’t Go”, a protest against the proposed All Blacks tour of South Africa. The song was written by Don McGlashan, Frank Stark and Geoff Chapple. McGlashan, Chris Knox and Rick Bryant were the main vocalists.

McGlashan formed the multi-media group The Front Lawn with Harry Sinclair. The duo (in their late stages a trio, thanks to the addition of actor Jennifer Ward-Lealand) won acclaim for theatre shows that combined music with physical comedy. McGlashan’s song “Andy”, written in memory of his late brother, was later listed among the APRA Top 100 New Zealand Songs of All Time.

Don McGlashan and Sinclair also made and starred in short films Walk Short (in which each played multiple roles), The Lounge Bar and 1990’s Linda’s Body. By now Sinclair was growing increasingly interested in directing, while McGlashan was keen to return to the live circuit. He had also begun composing for the screen.

David Long moved from Wellington to Auckland to work with McGlashan, and the two began working together and auditioning drummers. After playing their first gig on St Patrick’s Day 1991 with a session drummer, Steve Garden, they heard about Ross Burge and convinced him to move back to New Zealand from New York to join The Mutton Birds. The band began to become successful—”Anchor Me” won McGlashan the 1994 Silver Scroll Award—and later moved to the UK. However, while Mutton Birds received acclaim from UK critics and music magazines, they failed to achieve mainstream success. Eventually, they disbanded, and McGlashan returned to New Zealand.

Don McGlashan’s first solo album, Warm Hand, was released in May 2006. It was nominated for an NZ Music Award for album of the year, and its debut single “Miracle Sun” was a nominee for New Zealand’s supreme songwriting award, the APRA Silver Scroll. In March 2009, the album Marvellous Year was released through Arch Hill Records. The album is credited to Don McGlashan & The Seven Sisters, a band that had begun when he toured Warm Hand. The album included a new version of McGlashan-penned hit “Bathe in the River”, with McGlashan on lead vocals.

In 2005, “Anchor Me” was re-recorded by an ensemble of NZ artists to commemorate the 20th anniversary of the Rainbow Warrior bombing. McGlashan allowed the song to be used but did not perform on it, out of the concern it would turn the attention to him instead of the event the charity song was to represent. In 2012 McGlashan was one of a select number of artists given permission to visit Antarctica. The following year he was awarded the two-month Michael King residency.

McGlashan played euphonium on the album Time On Earth, by Crowded House. He played live with the band at Glastonbury 2008 and was a regular member of the touring line-up throughout their 2008 world tour. Later he played euphonium on track ‘Hole In My Head’ by Melbourne singer/songwriter Marjorie Cardwell, for her 2012 album In Another World.

In 2012, McGlashan and Dave Dobbyn partnered for the Acoustic Church Tour. In 2015 he released his third solo album Lucky Stars, which he described as “his most personal album yet”. In 2022 he released his fourth solo album Bright November Morning which includes songs from his early days playing gigs with The Mutton Birds to his song about the 1881 invasion of Parihaka, titled John Bryce. McGlashan said it was hard to pinpoint where the album fits in his career.

“It’d be like looking at a whole photo album of the last few years and saying this is exactly where I am, these are all the things that sort of makeup who I am and who I am right now.” Soon after its release, the album reached the top of the New Zealand Record Album Music Charts

Don McGlashan began contributing to soundtracks as early as 1980 when he was one of the trios who composed the music for the New Zealand police series Mortimer’s Patch. McGlashan composed occasionally for the screen over the next two and a half decades, including work on Jane Campion’s film An Angel at My Table; Cinema of Unease, a documentary about the history of New Zealand cinema; and long-running detective series Street Legal.

McGlashan began to devote a lot more energy to soundtrack work from 2005 onwards. Since then he has composed the music for more than a dozen screen projects – predominantly feature films (including The Dead Lands and the orchestral soundtrack for Dean Spanley) – as well as short films (Tick) and television (Katherine Mansfield telemovie Bliss, TV series Orange Roughies).

Song “Bathe In The River” featured on McGlashan’s soundtrack to acclaimed Toa Fraser film No. 2 (2006, also known as Naming Number Two). Sung by Hollie Smith, it reached number 2 on the New Zealand music charts and went platinum. The song also won him the 2006 APRA Silver Scroll Award, his second win. In 2011 McGlashan provided the score to the fireworks during the opening ceremony of the 2011 Rugby World Cup.

Don McGlashan is noted for writing lyrics that feature New Zealand imagery and vernacular, many involving his hometown of Auckland. Examples include Dominion Road in Auckland (“Dominion Road”), the Auckland Harbour Bridge (“Harbour Bridge”), Takapuna Beach (“Andy”), and the Coromandel (“Passenger 26”). The Valiant in “White Valiant” was a commonly seen car in 1970s-era New Zealand: McGlashan never owned one, though fellow musician Dave Dobbyn did.

McGlashan noted that while living in England as a member of the Mutton Birds, he still wrote “letters to home” to New Zealand in his songs, as he struggled to find a connection with English imagery. In 1998 McGlashan explained his writing process as “trying to write about people that I know. I suppose ‘write letters to people, or try to unpick a moment that I’ve lived through and either tell the story in the first person or make up some characters who then tell the story in their own words – and by using what they don’t say as much as what they do say, try and paint their world in a song.”

Don McGlashan is married to Ann McDonell, they had their wedding in 2018. He has two children Pearl McGlashan and Louie McGlashan. McGlashan married his first wife Marianne Schultz in 1989 until they divorced in 2017. However, he has also played a number of different instruments throughout his musical career: asked what instruments he plays, he answered, “Well I don’t play violin”. However, he is noted for playing the euphonium and French horn. With Blam Blam Blam, McGlashan played drums and euphonium. He later picked up guitar duties for his work with The Front Lawn and The Mutton Birds.

How much is Don McGlashan worth? Don McGlashan net worth is estimated at around $8 million. His main source of income is from his career as a singer, instrumentalist and composer. McGlashan successful career has earned him some luxurious lifestyles and some fancy cars trips. He is one of the richest and influential singers in New Zealand.

02/10/2021
Read the complete write-up of Lasizwe boyfriend, net worth, age, height, family as well as other information you need to know. Introduction Thulasizwe Siphiwe Dambuza who...