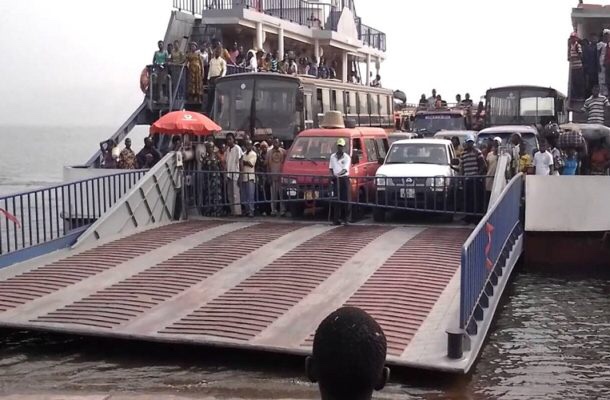 What should have been a smooth travel for travel between Ekye Amanfrom to Adawso in Afraim Plains south district nearly became a disaster when the ferry passengers were traveling with broke down in the middle of the Volta river on Monday at 4pm.

The pontoon which was loaded with cargo and passengers could not move further as the single engine it has been operating with for a year as over broke down causin fear and pain among travelers.

The engine stopped working after the pontoon was hit by a storm while moving. It was subsequently dragged to the downstream by the wind to anchor on the deepest side of the river.

It took the timely intervention of some local boat operators to rescue the passengers on board the ferry to the shores of the river to prevent what would have been a national disaster.
However, Cargo vehicles and passenger vehicles are still stuck on the river.

There are plans ongoing to move the ferry to a safer zone as the goods onboard are still stuck on the river.