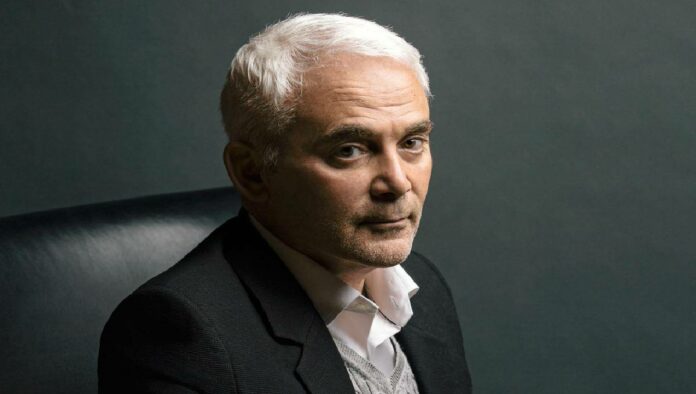 Read the complete write-up of Frank Giustra net worth, age, wife, ex-wife, children, height, family, parents, businesses as well as other information you need to know.

Frank Giustra is a Canadian businessman, mining financier and global philanthropist. He is also best known as the founder of Lionsgate Entertainment. Giustra is CEO of Fiore Group of Companies and co-chair of International Crisis Group. From 2001 to 2007, he was the chairman of the merchant banking firm, Endeavour Financial, which financed mining companies.

Frank Giustra CM OBC was born on August 22, 1957 (age 64 years) in Sudbury, Ontario, Canada. He is the son of Giuseppe and Domenica Giustra, who immigrated to Canada. His father worked in the mines as a driller and blaster. Giustra spent his childhood in “Italy, Argentina and Texada Island off the British Columbia coast.”

Giustra spent his middle school years in Aldergrove, British Columbia, Canada, and graduated from high school there in 1976. Giuseppe Giustra was a Sudbury nickel miner, who introduced his son to his broker. He graduated in 1979 from Douglas College where he spent his first year playing trumpet in the school’s music program before switching over to business and finance.

Frank Giustra began his career in the investment industry in 1978 with Merrill Lynch as an assistant trader and then as a stockbroker. Giustra raised “billions of dollars and developed a loyal following of investors in mining ventures” while at the Vancouver Stock Exchange as a broker. He left in 1996 before the mining sector collapsed.

Giustra left Merrill Lynch to create a resources-financing group in Europe for the new firm Yorkton Securities in the early 1980s. He is said to have “transformed Yorkton into a major force in the world of international mining finance.” In 1990, he became president of the company and, in 1995, was appointed chairman and CEO.

In 2001, Giustra and a group of investors took control of Wheaton River Minerals, which was then a junior company. By 2005, Wheaton merged with Rob McEwen’s Goldcorp. As the price of gold rose, Ian Telfer, a “mine entrepreneur.. turned an insignificant shell company into a billion-dollar gold producer.” In 2005 Goldcorp absorbed Wheaton River Minerals. According to Bloomberg News, Wheaton River Minerals was the precursor for both Goldcorp and Endeavour. By 2014, Goldcorp was the world’s fourth-largest producer of gold.

At the time of the merger, Petro Rubiales was described by Newswire as a “Canadian-based company and producer of heavy crude oil” and “owner of 100 percent of Meta Petroleum Limited, a Colombian oil and gas operator which operates the Rubiales and Piriri oil fields in the Llanos Basin in association with Ecopetrol S.A. the Colombian, state-owned oil company. The Company was focused on identifying opportunities primarily within the eastern Llanos Basin of Colombia.”

Frank Giustra was chairman of Leagold Mining which acquired the Los Filos deposit in Guerrero state, Mexico, a deposit that Giustra says, is twice the size of the Wheaton River Mineral’s assets by 2017. In 2019, Leagold Mining was sold to Equinox Gold Corporation. After he left investment banking in 1996, served as chairman of Lions Gate Entertainment from 1997 to 2003.

Giustra hoped to capitalize on the growing film industry in Vancouver. The company bought a number of small production facilities and distributors. Its first success was American Psycho, which began a trend of producing and distributing films far too controversial for the major American studios. Other successes included Affliction, Gods and Monsters, Dogma, Crash and the Michael Moore documentary Fahrenheit 9/11, which turned out to be the studio’s highest-grossing film.

In 2000, Giustra left the firm and it was taken over by Jon Feltheimer and Michael Burns. Giustra sold most of his stake in Lionsgate in 2003. In December 2010, Giustra returned to Lions Gate Entertainment as a member of the board of directors. In August 2011, it was announced, by Alcon Entertainment that Ridley Scott would direct the new Blade Runner film. Frank Giustra and Tim Gamble, CEOs of Thunderbird Films, will serve as executive producers.

Frank Giustra is a major shareholder of Thunderbird Entertainment, a pure-play content production studio creating award-winning original programming in scripted, factual and animation that includes Atomic Cartoons and Great Pacific Television. Based in Vancouver, with offices in Los Angeles, Toronto, Ottawa and London, Thunderbird partners with leading OTT platforms such as Netflix and Amazon Prime and traditional broadcasters like CBC and Discovery.

Thunderbird’s projects include Highway Thru Hell for Discovery, Oscar-winning Blade Runner 2049, CSA-winning Kim’s Convenience for CBC and Netflix, and the animated Emmy-winning series Beat Bugs for Netflix. Thunderbird’s animation company, Atomic Cartoons is producing Last Kids on Earth based on the New York Times best-selling book series for Netflix and is in development on Eerie Elementary and Princesses Wear Pants to name a few.

Frank Giustra is president and CEO of the Fiore Group, a private firm managing a broad portfolio of private equity investments and companies, focussing on natural resources, entertainment, art, food and lifestyle. The portfolio is as varied as Mr. Giustra’s interests – Modern Farmer Media Inc., and he is the founder of Domenica Fiore, award-winning Olive Oils which is named after his mother, a company that produces olive oil. His entrepreneurial success includes founding Lionsgate Entertainment, now one of the world’s largest independent film companies.

Giustra is a major shareholder of Thunderbird Entertainment, a company focused on content and distribution in the television and film sector. Giustra has an established track record of building natural resource companies through access to capital and creative deal-making. As President and later chairman and chief executive officer of Yorkton Securities in the 1990s, he grew the firm into a leading natural resource investment bank.

As Chairman of Endeavour Financial from 2001 to 2007, his vision and leadership led to the successful launch of numerous resource companies, including Wheaton River Minerals Ltd. (acquired by Goldcorp Inc.), and Silver Wheaton Corporation. Giustra is frequently quoted regarding gold and currency markets in publications such as Globe and Mail, Kitco News, StockHouse.com, GoldEditor.com and his own blog FrankGiustra.com

Frank Giustra and President Bill Clinton launched the Clinton Giustra Enterprise Partnership in 2007, which in 2020 transitioned into a new independent entity named Acceso. Acceso is a social business builder. Acceso, with support from Mr. Giustra, invested start-up capital, built from scratch, and manages agribusinesses in Colombia, El Salvador, and Haiti.

Frank Giustra Social Enterprise Partnership and Initiative CGSGI aim to alleviate poverty in the developing world in partnership with the global mining community. Giustra committed $USD 100 million-plus half of what he earns in the resource industry for the rest of his life. Carlos Slim Helú, the Mexican businessman and one of the richest men in the world, made a matching contribution. On June 17, 2010, Giustra joined with Carlos Slim and President Clinton to create a $20 million fund to assist small businesses in earthquake-ravaged Haiti.

Check Out: Alison Victoria net worth

In 2005, the foundation began supporting the International Crisis Group, an independent organization working to prevent and resolve deadly conflict on five continents through analysis and high-level advocacy. With the support of Giustra, who sits on the executive committee, and contributions that total $10 million, the International Crisis Group is a leading independent, non-partisan, source of analysis and advice to governments and intergovernmental bodies like the United Nations, European Union and World Bank on the prevention and resolution of deadly conflict.

Frank Giustra is a strong believer in philanthropy and devotes much of his time to a variety of causes both locally and globally. Mr. Giustra brings an entrepreneurial approach to philanthropy to catalyze new ideas and innovations that can be scaled and shared.

The Giustra Foundation (formerly Radcliffe Foundation) was established in 1997 by Frank Giustra. The Vancouver-based Foundation supports initiatives focused on women and children, education, homelessness and refugee resettlement in British Columbia and elsewhere in Canada. The Giustra Foundation is involved in the global refugee crisis by providing humanitarian aid, along with being the founding partner in the Global Refugee Sponsorship Initiative.

The Giustra Foundation also has worked with the Vancouver Foundation and the City of Vancouver on Streetohome, a community-based initiative established in 2008 which brings together non-profits, civil society groups, businesses, governments and citizens to address homelessness in Vancouver. Giustra sits on the board of Streetohome Foundation and chairs the capital campaign. He also donated $5 million to the foundation in 2010.

Frank Giustra is married to his second wife Francesca Dutton, they had their marriage ceremony in 2021. However, he was married to his ex-wife Alison Lawton, a Canadian investor, activist, and producer of documentary films on humanitarian crises. Giustra and his first wife Lawton divorced in 2007 and had two children Isabella Giustra, and Nicolai Giustra.

How much is Frank Giustra worth? Frank Giustra net worth is estimated at around $1.5 billion. His main source of income is from his career as a businessman and mining financier. Giustra successful career has earned him some luxurious lifestyles and some fancy cars trips. He is one of the richest and influential people in Canada. However, The Giustra Foundation has contributed $30M towards the Clinton HIV/AIDS Initiative (CHAI), which works with governments and other partners to increase access to medical care for HIV+ people.