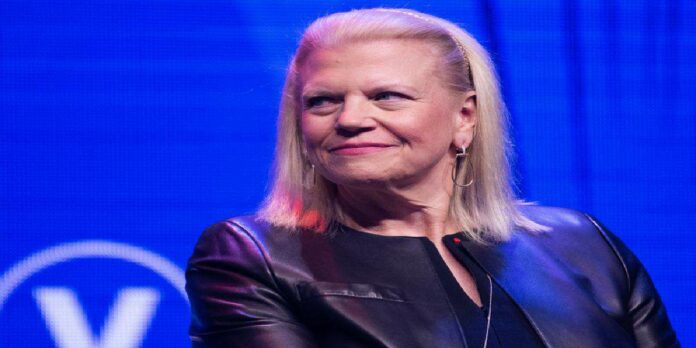 Ginni Rometty is an American business executive who served as executive chairman of IBM after stepping down as CEO on April 1, 2020. She previously served as chairman, president and CEO of IBM, becoming the first woman to head the company. She retired from IBM on December 31, 2020, after a near-40 year career at IBM.

Prior to becoming president and CEO in January 2012, she first joined IBM as a systems engineer in 1981 and subsequently headed global sales, marketing, and strategy. While general manager of IBM’s global services division, in 2002 she helped negotiate IBM’s purchase of PricewaterhouseCoopers’ IT consulting business, becoming known for her work integrating the two companies. As CEO, she focused IBM on analytics, cloud computing, and cognitive computing systems.

Rometty’s tenure as IBM’s CEO was marked by noteworthy awards, including Bloomberg’s 50 Most Influential People in the World, Fortune’s “50 Most Powerful Women in Business”, Time’s 20 Most Important People in Tech and Forbes’ America’s Top 50 Women In Tech. Her tenure was also met by fierce criticism relating to executive compensation bonuses, layoffs, outsourcing, and presiding over 24 consecutive quarters of revenue decline.

Virginia Marie “Ginni” Rometty was born on July 29, 1957 (age 64 years) in Chicago, Illinois, United States. Her birth name was Virginia Marie Nicosia. Growing up outside Chicago, she was the eldest of four children in an Italian-American family. Her parents divorced and her father left when she was fifteen years old, and her mother subsequently took on multiple jobs to support the family while Rometty looked after the household in the evenings.

Ginni Rometty began attending Northwestern University in Illinois in 1975 on a scholarship from General Motors, where she interned between her junior and senior years. Rometty was also a member of the Kappa Kappa Gamma sorority, eventually serving as its president.

She graduated with high honours from the Robert R. McCormick School of Engineering and Applied Science at Northwestern University in 1979, receiving a bachelor’s degree in computer science and electrical engineering. She has received honorary doctoral degrees from Rensselaer Polytechnic Institute (2014) and Northwestern University (2015). She also received an honorary degree from North Carolina State University.

After graduation in 1979, Ginni Rometty went to work for General Motors Institute in Flint, where she was responsible for application and systems development. In 1981 she joined IBM as a systems analyst and systems engineer in Detroit. Initially working with clients in the insurance industry, she spent her first ten years at IBM in technical positions.

The New York Times writes that she “quickly moved up to a series of management jobs,” where she worked with clients in insurance, banking, telecommunications, manufacturing and health care. She spent the 1990s working in sales, and by the late 1990s was helping clients such as Prudential Financial, Inc. with their internet features. She joined IBM’s Consulting Group in 1991.

While general manager of IBM’s global services division, in 2002 she championed and helped negotiate the purchase of Monday, the consulting arm of professional services firm PricewaterhouseCoopers for $3.5 billion. The acquisition was the “largest in professional services history” and launched IBM in the services business. While serving as senior vice president of IBM Global Business Services, Rometty then received her “big break at IBM when she was given the task of integrating PricewaterhouseCoopers and its consultants with IBM.

In 2002 Time named Ginni Rometty to its 2002 Global Business Influential list. From 2005 until 2009 she was the senior vice president of Global Business Services at IBM, and she also became senior vice president of Enterprise Business Services-IBM Global Services in July 2005. Among other roles, she served as general manager of IBM Global Services, Americas, as well as general manager of IBM’s Global Insurance and Financial Services Sector.

Laid out by Ginni Rometty and other IBM executives, in 2007 IBM announced a five-year growth plan concerning revenue growth and capital allocation. Among other strategies, the “2015 Roadmap” outlined moving IBM away from the hardware industry to focus on businesses such as software and services.

Ginni Rometty became senior vice president and group executive for sales, marketing, and strategy in 2009, focusing on the company’s “fast-growing analytics unit”. In January 2009, she was placed in charge of IBM’s sales force, serving as senior vice president of global sales and distribution until 2010. During this time she pushed the development of IBM’s growth markets unit, which had been created in 2008 to focus on emerging markets such as Brazil and Vietnam.

Check Out: Safra Catz net worth

From 2010 until 2012 Ginni Rometty was an IBM senior vice president, and from 2010 until 2012, she was IBM’s Group Executive of Sales, Marketing & Strategy. In 2011, CNN reported that she was “credited with spearheading IBM’s growth strategy by getting the company into the cloud computing and analytics businesses. She was also at the helm of readying Watson, the Jeopardy! playing computer, for commercial use.”

On October 25, 2011, IBM announced that Ginni Rometty was to be the company’s next president and CEO, becoming the ninth chief executive in its history. Her role as IBM’s first female chief received a note in the press, with former CEO Sam Palmisano responding that her selection had “zero to do with progressive social policies.”

Ginni Rometty became president and CEO on January 1, 2012, also taking on the additional role of IBM chairman on October 1, 2012, when Palmisano retired. With plans to take IBM out of unprofitable business lines and citing big data and analytics as IBM’s “next big growth machine,” in 2014 she brokered a partnership for Apple to design applications for IBM’s enterprise customers.

Later that year Ginni Rometty announced that IBM would partner with SAP on cloud computing and with Twitter on data analytics, and in 2015 she also brokered a partnership with Box. Rometty had IBM spend $8.5 billion acquiring around 30 companies between 2012 and 2015, and by 2016 she had overseen the divestment of about $7 billion in commoditized assets such as chip manufacturing.

In May 2017, Austin Business reported that Rometty had successfully shifted IBM away from “shrinking businesses such as computers and operating system software, and into higher-growth areas like artificial intelligence.” On June 28, 2017, she was awarded the KPMG Inspire Greatness Award.

In January 2018, Ginni Rometty announced IBM’s first quarter of year-over-year revenue increase since 2012, with particular growth in areas such as data, blockchain, and the cloud. By 2018, she stated that around half of IBM’s 9,043 patents in 2017 were in AI, cloud computing, cybersecurity, blockchain and quantum computing.

As a director at IBM since 2012, Rometty has also been involved in IBM organizations such as its Women in Technology Council, Women’s Executive Council, and Women’s Leadership Council. A former director at APQC, she also served on the board of directors of AIG from 2006 until 2009.

She remains on the board of overseers and board of managers for the Memorial Sloan Kettering Cancer Center, and since 2013 she has been a council member at the Latin America Conservation Council.

Ginni Rometty serves on the Council on Foreign Relations and is also on the board of trustees of her alma mater Northwestern University, where she was the commencement speaker for the graduating class of 2015.

She was a member of the White House’s Business Advisory Panel for much of 2017 before the panel dissolved itself that August. In November 2017, she co-chaired WEF Davos.

Ginni Rometty also serves as the co-chair of the Aspen Institute’s Cyber Group, a member of the advisory board of Tsinghua University School of Economics and Management, and a member of the Singapore Economic Development Board International Advisory Council. In May 2020, she was elected to the board of JPMorgan Chase.

Ginni Rometty’s tenure as IBM CEO has been marked by prestigious rankings, including by Bloomberg, who named her among the 50 Most Influential People in the World in 2012. She was also named to the Time 100 list in 2012, and in 2014 Rometty was featured in the PBS documentary The Boomer List.

Rometty’s tenure as CEO has met with criticism as well, and by 2016 she had been named among the worst CEOs by publications including the Motley Fool, Forbes, the Wall Street Journal, and 24/7 Wallstreet. She was criticized by investors for 22 consecutive quarters of revenue decline between 2012 and the summer of 2017, and by IBM employees for accepting pay bonuses during times of layoffs and offshoring.

In May 2019, Rometty received the Edison Achievement Award for her commitment to innovation throughout her career.

How much is Ginni Rometty worth? Ginni Rometty net worth is estimated at around $90 million. Her salary was around $35 million and her main source of income is from her career as a business executive. Rometty’s successful career has earned her some luxurious lifestyles and some fancy cars. She was one of the richest CEO’s in the world before retiring in 2020.