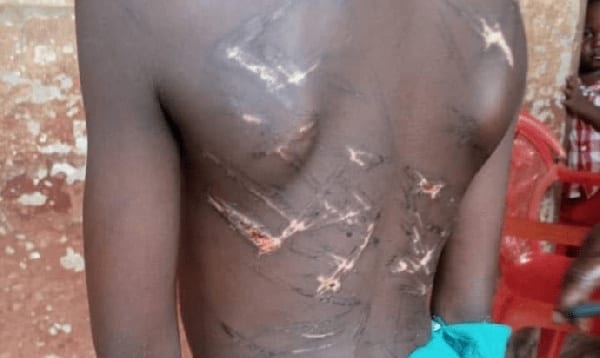 Ghana has seem the occurrence of some very disturbing news in the last couple of days and here is yet another disturbing story.

The whipping was his punishment for refusing to pound palm fruits as he was instructed to do by his grandmother.

The little boy said he was tired and, therefore, refused to pound the palm fruit.

His grandmother reported him to his uncle when he returned from work.

The uncle, thus, meted out the torture to the boy until blood started oozing from his lacerated back.

It is alleged the boy’s grandmother also smeared pepper on his raw wounds after the flogging.

The little boy’s teacher, Mr Odenkyi, shared the ordeal of the boy on social media.

According to the teacher, he got to know about what happened to his pupil when he visited him because he was not reporting to school.

The issue, he added, was reported to the police and the grandmother was arrested but has been granted bail.