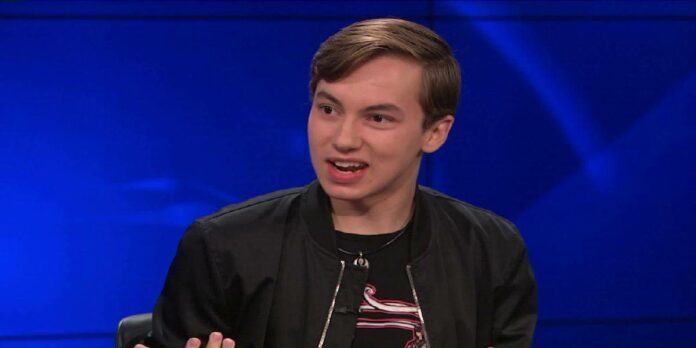 Hayden Byerly is an American actor. Beginning his professional career as a child actor at the age of ten, Byerly is best known for his role as Jude Adams Foster on the Freeform drama series The Fosters. Hayden Byerly was also seen in the spinoff series, Good Trouble.

Hayden Byerly was born on October 11, 2000 (age 21 years) in Lakewood, Colorado, United States. He grew up in Littleton, Colorado before eventually relocating with his parents to Los Angeles, California at the age of ten to pursue an acting career.

He first began to develop an interest in acting by imitating his favourite film and television characters and reciting their lines along with them. He has one younger brother.

Hayden Byerly began his acting career after winning first place in a national talent competition in Orlando, Florida. Shortly thereafter, he booked his very first audition, making his television debut in 2011 with a guest-starring role as Skunk, the scrappy leader of a misfit basketball team on the Disney XD comedy series Zeke and Luther. That same year, he made his feature film debut with a starring role as Nathan Vales in the supernatural horror film 11/11/11.

Check Out: Cierra Ramirez net worth

In 2012, Byerly began a recurring role on the NBC comedy-drama series Parenthood portraying Micah Watson, a boy with spina bifida who becomes the best friend of Max Braverman (portrayed by Max Burkholder).

He transitioned to work as a voice actor in 2012, voicing various roles in the video games Call of Duty: Black Ops II and Lightning Returns Final Fantasy XIII, as well as voicing the role of Prince Gustav on the Disney Channel animated series, Sofia the First.

In 2013, Hayden Byerly became one of the principal ensemble cast members on the ABC Family drama series The Fosters. In the series, Byerly portrays Jude Adams-Foster, an abused and sensitive 12-year-old foster child who is subsequently adopted into a large blended family where he begins questioning his sexuality and the nature of his feelings for his best friend Connor (portrayed by Gavin MacIntosh).

In March 2014, Hollywood.com named Byerly’s “heartwarming” portrayal of Jude to its list of “Favorite LGBTQ Characters on TV.”

On March 2, 2015, ABC Family aired an episode of The Fosters (“Now Hear This”) that featured Byerly’s character and MacIntosh’s character sharing a kiss, which is believed to be the youngest LGBT kiss ever in U.S. television history.

Hayden Byerly’s personal interests include reading mysteries and action-adventure books and solving advanced math problems, as well as playing basketball and video games. Alongside his former Fosters co-star Gavin MacIntosh, Byerly has been an outspoken advocate against school bullying, encouraging young people to embrace their differences and lending his support to the “Be Good to Each Other” campaign.

Check Out: Maia Mitchell net worth

Byerly stands with an appealing height and has a good body weight that suits his personality. He holds American nationality but his religion, birth sign, and ethnicity are still unknown to the general people.

Is Hayden Byerly married? Hayden Byerly is currently not married. He dated Alyssa Jirrels from 2015 until 2017. As of December 2021, he has been dating his girlfriend, Gabriella, since 2018. They have no kids together.

How much is Hayden Byerly worth? Hayden Byerly net worth is estimated at around $1.5 million. His main source of income is from his career as an actor. Byerly successful career has earned him some luxurious lifestyles and some fancy cars trips. He is one of the young richest and influential actors in the United States.