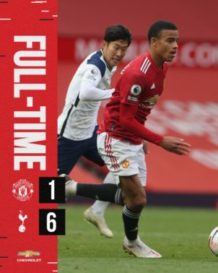 Bruno Fernandes made no mistake from the spot kick, slotting the opener past Hugo Lloris that was the turning point their destruction.

Tanguy Ndombele, the France international, leveled the score and Heung-Min Son turned the game around after delivering a wonderful goal at all standard past Man United’s Keeper, David De-Gea. This left United at 1-2 as Tottenham Spurs lead.

Manchester United was showing sings of equalizing ,hitting the bars and creating more chances, Until the Third goal by Totteham Hotspurs again. This was the heaviest blow from Morinhno’s men as Man United were left with frustrations.

Anthony Martial got a straight red card for lashing out at Erik Lamela on the 28th minutes, and this made Tottenham to press high non the Old Trafford side.

Harry Kane scored his first goal of the match and Son’s second added salt to United wounds. The host conceded four goals in   the first half of a Premier League match for the first time.

The match ended first half 4-1 in favour of Tottenham Hotspurs.

Fans were agitating thinking United will defend to save more embarrassment but this fell on deaf ears.

Ivorian International, Serge Aurier added his own which was Tottenham Hotspurs fifth goal of the game early in the second half.

Harry Kane, Tottenham Hotspurs’s most prolific striker converted his second and the Sixth goal of the match from the penalty spot 10 minutes from time.

Morinhno “The Special One” haunted his former Club on his second return to Old Trafford.

Tottenhman Hotspurs rose to fifth position on the Premier League Table but are two points behind fourth place Arsenal after winning their second match of the season.

Man United dropped to 16th position on the League Table .

“this is absolutely pathetic”

Watch the match highlight below