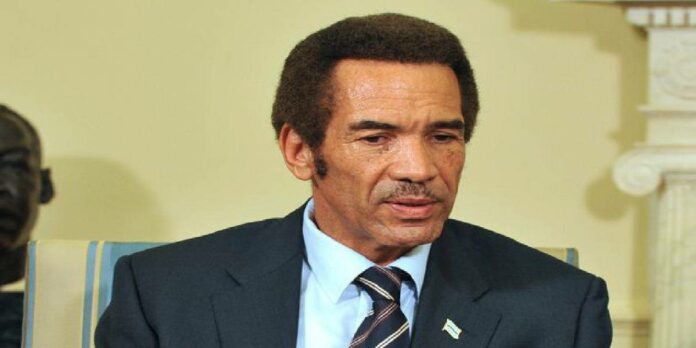 Lieutenant General Dr Seretse Khama Ian Khama was born on February 27, 1953 (age 68 years) in Chertsey, United Kingdom. He is the second child of Sir Seretse Khama (1 July 1921 – 13 July 1980), who was the country’s foremost independence leader and President from 1966 to 1980, and Lady Khama. He was born in Chertsey, Surrey, during the period in which his father was exiled to the United Kingdom due to the opposition by the colonial government and the emergent apartheid regime in South Africa to his marriage to a white woman.

Ian Khama is also the grandson of Sekgoma II (1869–1925), who was the paramount chief of the Bamangwato people, and the great-grandson of Khama III (1837–1923), their king; and the great-great-grandson of Kgosikgolo Sekgoma I, the Chief of the Bamangwato people (1815–1885). The name “Seretse” means “the clay that binds together”, and was given to his father to celebrate the recent reconciliation of his father and grandfather; this reconciliation assured Seretse Khama’s ascension to the throne when his aged father died in 1925.

Education: Ian Khama is an alumnus of Waterford Kamhlaba, a United World College in Mbabane, Swaziland. He is a qualified pilot and attended Royal Military Academy Sandhurst, where the British Army trains its officers. In April 1977, Khama was appointed as a brigadier general at age 24 during Sir Seretse Khama’s Presidency, making him the Deputy Commander to late former Vice President Lt. Gen. Mompati Merafhe.

Ian Khama later served as the Commander of the Botswana Defence Force (BDF) from his appointment in 1989, retiring from the position in 1998. During this time, Khama received military honours, including the Founder Officer Medal for being part of the Botswana Defence Force when it was created in 1977, the Duty Code Order for devotion to duty, and the Distinguished Service Medal in 1997 after 20 years of service.

Ian Khama, serving as Commander of the Botswana Defence Force, announced on 16 December 1997 that he would retire from his command on 31 March 1998. Because this was the same date as the planned retirement of President Quett Masire, it fueled political speculation about Khama. On 1 April 1998, when Vice-President Festus Mogae succeeded Masire as President, Khama was appointed as the new Vice-President.

However, Khama did not hold a seat in the National Assembly, and so could not immediately take office as Vice-President. In early July 1998, he overwhelmingly won a by-election in Serowe North, receiving 2,986 votes against 86 votes for the candidate of the opposition Botswana National Front.

Check Out: Vee Mampeezy net worth

On 13 July, Ian Khama took his seat in the National Assembly and was sworn in as Vice-President. By these actions, he effectively renounced his hitherto unclaimed hereditary chieftaincy, as the constitutional monarchs of modern Botswana are legally barred from actively taking part in party politics. Be this as it may, many traditional Bamangwato continued to recognize him as their chief.

Following the victory of the Botswana Democratic Party (BDP) in the general election of October 1999, Khama remained Vice-President as well as Minister of Presidential Affairs and Public Administration. Mogae granted Khama a one-year leave later in the year, a decision that the opposition Botswana Congress Party and the Botswana Council of Non-Governmental Organizations sharply criticized. Khama’s leave became effective on 1 January 2000. He returned to his duties as Vice-President on 1 September 2000, although he was replaced as Minister of Presidential Affairs and Public Administration at that time.

Ian Khama, already a member of the BDP Central Committee, was elected as Chairman of the BDP on 22 July 2003 at a party congress; he defeated the previous Chairman, Ponatshego Kedikilwe, receiving 512 votes against 219 for Kedikilwe. Khama had been backed for the post by President Mogae, and the outcome was viewed as crucial, paving the way for Khama to eventually succeed Mogae as President.

In 2007, Khama appeared on British television in the BBC’s Top Gear motoring programme and he met the presenters as they prepared to cross the Makgadikgadi Pan in northern Botswana by car.

Mogae stepped down, as he had long said he would do, on 1 April 2008; Khama succeeded him as President. At his swearing-in ceremony in Gaborone, Khama said that there would be continuity in policy and no “radical changes”, although he said that “a change in style and special emphasis on a number of issues” might be evident, and he emphasized his commitment to democracy. He immediately undertook a major cabinet reshuffle, and he appointed Mompati Merafhe, who had been Foreign Minister, as the new Vice-President.

Ian Khama left his post as Chairman of the BDP upon becoming President; Daniel Kwelagobe was chosen to replace him. Khama was not elected to the presidency for his first year in office, being appointed due to his position as Vice President. Some political commentators such as Kenneth Good see it as a flaw in the electoral system in Botswana.

President Khama first articulated his desire to impose a 70% alcohol levy, meant to combat the problem of excessive drinking in Botswana. The practical effect of such a levy was soon seen to have a deleterious effect on the brewing industry, which resisted the imposition of such a levy, along with bars and other drinking establishments. The President later imposed a 30% levy after consulting with industry leaders, including the Botswana Confederation of Commerce, Industry and Manpower. SAB Miller secured British diplomatic representation to attempt to lower the levy.

In 2008, The Media Practitioners Act was passed into Botswana law. the law has been criticized as inhibiting free speech by several outlets. The bill’s language seeks to encourage a more professional journalistic standard. The law has proven to be difficult to enforce or implement. In 2009, Khama appeared on CNN’s African Voices which painted a positive picture of Khama, and named Botswana an African “success story”.

In the 2009 Botswana general election, Ian Khama was elected to the first of two terms as president. Politically, Khama’s election campaign was dominated by internal squabbling in the Botswana Democratic Party (BDP), which was clearly divided into two major factions, the A-Team and the Barata Phati factions. The A-Team was led by President Khama, Jacob Nkate, the former Minister of Education, and the late former Vice President Mompati Merafhe. The Barata Phati faction was led by former BDP secretary general Daniel Kwelagobe, formerly the Chairman of the Party, the late Gomolemo Motswaledi, and also retired former Vice President Ponatshego Kedikilwe, who wished to bring about constitutional reform not only to the BDP but also to the country’s constitution.

In the run-up to the 2009 elections, Motswaledi, who gave up on his ambition to run for a seat in Serowe in order to make way for Ian Khama’s brother, Tshekedi Khama II, was also excluded from representing Gaborone when he ran afoul of President Khama. Motswaledi lost a lawsuit against Khama when the High Court ruled that the president enjoyed constitutional immunity from litigation by virtue of his position.

After this incident, critics accused Khama of authoritarian tendencies; More than half of the BDP Central Committee at one time felt that Khama had on many instances acted beyond his powers. Others, including Khama and his legal representation, said that he was simply instilling discipline as part of his role as the head of the party. Khama won 53.26% of the vote and a majority of seats in the National Assembly.

After the 2009 election, Motswaledi bowed out of the BDP to form another political party, the Botswana Movement for Democracy (BMD). Khama put in place a ban on Elephant hunting in 2014. The death of John Kalafatis, whose death resulted during the course of a robbery investigation, occurred early in Khama’s presidency. The police statement on Kalifatis reads: “The deceased, John Kalafatis, had a warrant of arrest issued against him on 12 January 2009 for armed robbery among others. All along, he was a fugitive from justice.”

The officers involved claimed that they mistakenly believed him to be reaching for his firearm at the time of the shooting. Other sources dispute this and claim that Kalafatis had been executed by members of the Botswana Defense Force. The three members of the BDF responsible for the death of Kalifatis were found guilty of murder, and each was sentenced to 11 years in prison. They received a presidential pardon from Khama in 2012. This was seen as proof by some sources that Khama was involved in the killing. The prosecuting lawyer for Kalifatis said, “What is his special interest in these particular offenders, how can we not suspect that he had a personal interest in the case…?”

In the 2014 Botswana general election, Ian Khama won his second term. His party received 46.45% of the vote, and a majority of seats in the National Assembly. In the lead up to the election, opposition politician Gomolemo Motswaledi died in a traffic collision on 30 July 2014. While there was some speculation on the incident being politically motivated, the police force concluded that the death was an accident.

In 2015, Ian Khama was awarded an honorary doctorate in Political Science from Konkuk University in South Korea.[54] After he received the degree, Khama’s official title was “His Excellency the President Lieutenant General Dr Seretse Khama Ian Khama”.

Khama took a strong stance against the Zimbabwean government, particularly Robert Mugabe. He did so by refusing to recognize the government unless and until it included members of the Movement for Democratic Change (MDC) headed by Morgan Tsvangarai. Khama also condemned the action of Sudan’s President Omar al-Bashir in the region of Dafur and became a vocal critic of despotic governments in Africa along with President Jakaya Kikwete of Tanzania and President Levy Mwanawasa of Zambia.

Ian Khama has been criticized by some figures for making poor decisions, including former President Quett Masire, who claimed that the BDP had been taken over by opportunists looking to benefit from senior government positions.

Under Ian Khama, the government has also established the Directorate of Intelligence and Security Services (DISS) with police powers, which is seen as the Botswana equivalent of the Federal Bureau of Investigation in the United States. Although this type of organization is not new and is found in many countries, it has critics in Botswana who charge that there are very few domestic or transnational threats that the police and the military could not handle.

Some, including the Executive director of the Open Society Initiative for Southern Africa, Siphosami Malunga, have argued that the institution, initially headed by President Khama’s close friend Issac Kgosi, could easily be manipulated and used against political enemies or others who criticize the President or his administration.

On the economic front, Ian Khama has been a vocal proponent of moving Botswana away from its over-reliance on diamonds and diversifying its economy, especially to the agriculture and tourism sector.

Ian Khama put in place a ban on Elephant hunting during his time as President and supported conservation efforts in Botswana. In 2018, he criticized President Donald Trump for encouraging elephant poaching. Khama has been strongly prohibitionist in his attitude towards alcohol, viewing it as a significant problem.

On 1 April 2018, Mokgweetsi Masisi was sworn in as the 5th President of Botswana, succeeding Ian Khama and his full ten years of presidency. After several disagreements with Masisi, in particular, criticizing Masisi for authoritarian tendencies, Khama decided to leave the BDP and join the Botswana Patriotic Front (BPF), a newly formed breakaway from the BDP. He campaigned for the BPF, which won three seats in the 2019 general elections in the Serowe area.

How much is Ian Khama worth? Ian Khama net worth is estimated at around $10 million. Ian Khama successful career has earned him some luxurious and fancy cars. He is one of the richest politicians in Botswana. However, in 2018, after resigning from the presidency, Khama became a member of the Board of Directors of the US-based organization Conservation International, which is also active in Botswana.

This Post By Lydia Forson Is Making People Ask If She’s...

10/02/2021
ABOUT US
Our Motive is to provide reliable, accurate and informative news to you. The Urban and Rural at heart ❤️
Contact us: [email protected]
FOLLOW US
© Apumone 2022 All Rights Reserved