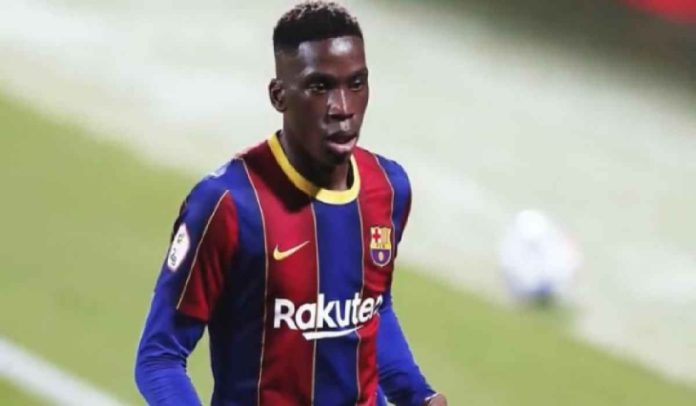 Read the complete write-up of Ilaix Moriba net worth, salary, age, height, clubs, transfer records as well as other information you need to know.

Ilaix Moriba is a Spanish professional footballer who plays as a central midfielder for Spanish side Barcelona B. Born in Guinea, he represents Spain internationally.

Ilaix Moriba who real name is Moriba Kourouma Kourouma was born 19 January 19, 2003(age 18 years) in Conakry, Guinea, to a Guinean mother and a Liberian father. He holds both Spanish and Guinean citizenship.

Moriba arrived at Barcelona from Espanyol in 2010. He has been considered as one of the best players of his generation, and he has very often played in categories of players far older than him.

Moriba really stood out at age 15 when he scored a hat-trick against the Real Madrid U19. The most remarkable thing was his last goal, where he scored from the middle of the pitch at the start of the second half.

In January 2019, as his youth contract was about to expire, clubs such as Manchester City and Juventus tried to sign him, but he eventually came to sign a record deal, with a salary of more than €500,000 a year and a buyout clause set at €100 million.

The following season he became a regular for Barça B. He scored his first goal on 8 March 2020, the winner in a 3–2 victory against Llagostera.

During the 2020–21 season, Moriba was included in the first team squad for the first time for a La Liga match against Granada. He was an unused substitute in a 4–0 away win.

Moriba would later make his first team debut – and as a starter – on 21 January against Cornellà in the round of 32 of the Copa del Rey. He was replaced by Sergio Busquets in the 74th minute of a 2–0 win. On 13 February 2021, he made his La Liga debut in a 5–1 win over Alavés, in which he also provided an assist for Francisco Trincão.

He scored his first La Liga goal in a 2–0 away win against Osasuna on 6 March 2021, to become the fifth youngest scorer in club’s history, topped only by Ansu Fati, Bojan Krkić, Lionel Messi and Pedri.

On 10 March 2021, Moriba made his UEFA Champions League debut against Paris Saint Germain, coming on as a substitute in the 79th minute.

Ilaix is a youth international with Spain, but he is also eligible for both Guinea and Liberia. It appeared the youngster eventually chose to play for the Guinea national team, being set to make his debut on the international stage in June 2020, before the pandemic froze the 2020 football season.

Ilaix Moriba is currently not in any relationship. He is single and is much focused on building his career at the moment.

How much is Ilaix Moriba worth? Ilaix Moriba net worth is estimated at around $1.5 million. His main source of income is from his football career. However, due to his physicality and creativity, Moriba has been compared to French footballer Paul Pogba.

10/02/2021
ABOUT US
Our Motive is to provide reliable, accurate and informative news to you. The Urban and Rural at heart ❤️
Contact us: [email protected]
FOLLOW US
© Apumone 2022 All Rights Reserved