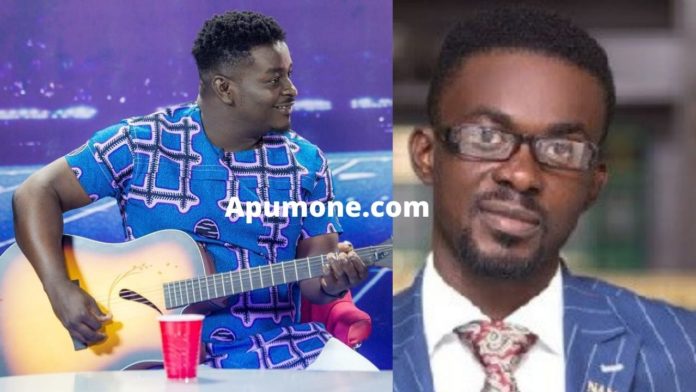 Highlife musician and signee of Zylofon Media, Kumi Guitar, has explained why he still defends and associates with Nana Appiah Mensah, aka NAM 1, in the face of insults, attacks and stigmatization from Ghanaians.

According to Kumi Guitar who was the first musician to be signed under Zylofon Media, the reason he still associates with the NAM 1 brand is that he (NAM 1) is a fine gentleman, and one needs to get closer to him to understand him and what he stands for.

Kumi Guitar said in an interview with Halifax Ansah Addo on Best Entertainment Show on UTV that it would be difficult for him to abandon his boss on the face of rumours that he is a scammer and a thief just because other people who neither know him nor have associated with his brand are making such claims.

“To whom much is given much is expected. I feel he is a very fine gentleman; you need to get closer to him to understand what he stands for. I have gotten the opportunity to be closer to him and I know what he stands for, so it will be very difficult to just disassociate myself from him and his brand because of what people out there who do not really know the kind of person he is are saying.”

CHECK OUT Stonebwoy net worth

He said he has come to know Nana Appiah Mensah as a kind person who willingly helps the poor and has compassion for human beings and the fact that people are calling him all sorts of names would not change how he feels about him.

Kumi Guitar further noted that he loves NAM 1 as a brother, and it will be difficult for him, to jump on the bandwagon to condemn him.

He said he has not seen any proof that the Zylofon media CEO is a bad person as has been described in the media and until such a time, he will continue to associate with the brand.

Nana Appiah Mensah, embattled CEO of Menzgold and Zylofon Media is currently facing charges of defrauding under false pretences in court. The prosecution had accused Nana Mensah, his wife, Rose Tetteh, and his sister, Benedicta Mensah, of using Menzgold as a tool to defraud more than 16,000 people of GH¢1.68 billion.

Listen to Kumi Guitar make his submission below: