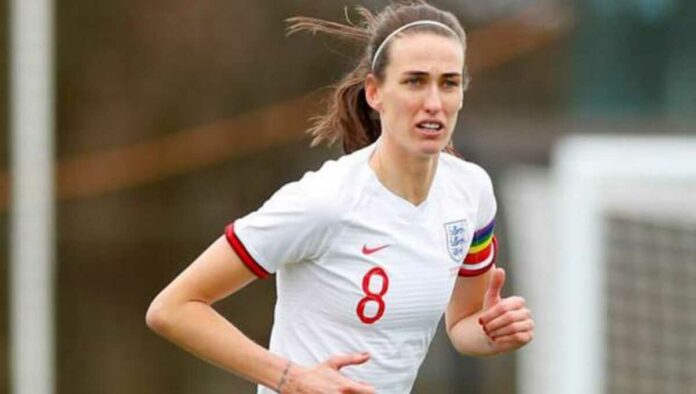 Jill Scott is an English professional footballer who plays as a midfielder for the England national team. The FIFA technical report into the 2011 Women’s World Cup described Scott as one of England’s four outstanding players; “an energetic, ball-winning midfielder who organizes the team well, works hard at both ends of the pitch and can change her team’s angle of attack.”

Scott is nicknamed “Crouchy” after male international footballer Peter Crouch. Since leaving home town club Sunderland for Everton in 2006, she contributed to the Blues’ FA Women’s Premier League Cup win in 2008 and FA Women’s Cup victory in 2010. On the individual level, Scott was voted 2008 FA Players’ Player of the Year and 2011 FA International Player of the Year.

Jill Louise Scott MBE was born on February 2, 1987 (age 35 years) in Sunderland, Tyne and Wear, United Kingdom. She is the daughter of Doreen Scott and Scott a British father. She attended Monkwearmouth Comprehensive School. A keen long-distance runner, Scott ran for Sunderland Harriers, winning the North of England Under-13 cross-country title and the Junior Great North Run, whilst playing football for Boldon Girls. At age 13, she had to decide between football or running and chose to concentrate on playing football.

After leaving school in 2003, Scott did a BTEC National Diploma in Sport and Exercise Science at Gateshead College. She remained at the college to study for a University of Sunderland foundation degree in sports and exercise development. She also played for the college football team alongside fellow Sunderland and international teammate Carly Telford. After completing her diploma, both Scott and Telford enrolled at Loughborough University to study sports.

Jill Scott began her senior career with Sunderland Women. In October 2005, aged only 18 years, she won the Women’s Player of the Month award for September, based on her performances for both her and club and also her country (at the under-19 level).

Scott joined Everton Ladies in July 2006, having turned down an approach from Doncaster Rovers Belles. Her first game for Everton came the following month, a 3–0 defeat against Arsenal Ladies in the FA Women’s Community Shield. At the end of the 2007–08 season she picked up the FA Tesco Players’ Player of the Year award. Also nominated were Arsenal’s Alex Scott and Karen Carney.

In April 2012 Scott was appointed as one of eight digital media ambassadors, one from each team, who wear their Twitter account name on their shirt sleeves to raise the profile of the WSL. Scott decided to leave Everton at the end of the 2013 season. During her first spell at Everton, Scott won the FA Women’s Premier League Cup and the FA Women’s Cup, playing in both finals.

After leaving Everton, Jill Scott signed a two-year deal with Manchester City. This move proved a success, as she played her part in securing the Continental Cup Trophy for Manchester City in 2014. In April 2015, Scott was shown the red card and banned for three matches for headbutting Arsenal’s Jade Bailey during Manchester City’s 1–0 defeat.

In June 2020, Scott signed a new two-year contract which saw her take up a coaching role at the club. At the 2020 Women’s FA Community Shield on 29 August 2020, Scott was shown another red card for two bookable offenses in Manchester City’s scrappy 2–0 defeat by Chelsea at Wembley Stadium. On 21 January 2021, Scott returned to Everton on loan for the remainder of the 2020–21 season. On 25 January 2022, Jill Scott signed for Aston Villa on loan until the end of the season.

Jill Scott played for the England Under-19s side at the junior level, scoring three times in three games as England won through the first round of qualifying for the 2006 UEFA Under-19s tournament. Her first call-up to the England senior squad came in May 2006, having captained the Under-19s side for the previous 18 months. She made her debut for the England senior team against the Netherlands in August 2006, coming on as a late substitute for Kelly Smith in a 4–0 win.

Scott made the squad for the 2007 World Cup, coming on as a substitute in England’s opening match against Japan. She went on to start the remainder of England’s matches in the tournament, scoring her first international goal in the 6–1 demolition of Argentina in the group stage. England bowed out at the quarter-final stage after a 3–0 defeat against the United States.

In May 2009, Jill Scott was one of the first 17 female players to be given central contracts by The Football Association. She was named in coach Hope Powell’s squad for the 2009 UEFA Women’s European Championships, scoring a late winner as England beat the Netherlands in the semi-final, having come on as a substitute for Jessica Clarke at the beginning of extra-time.

At the 2011 FIFA Women’s World Cup, Scott scored against New Zealand in England’s 2–1 group B win. She put England ahead against France in the quarter-final but did not take a penalty in her team’s 3–4 shootout defeat following a 1–1 draw. In February 2019, Scott pulled out of the England squad for the SheBelieves Cup.

Jill Scott was appointed Member of the Order of the British Empire (MBE) in the 2020 New Year Honours for services to women’s football. On 23 February 2021, Scott made her 150th appearance for the England team in a game against Northern Ireland which she would captain and play the whole 90 minutes as England would win 6–0. In June 2022 Scott was included in the England squad which won the UEFA Women’s Euro 2022.

Jill Scott is currently engaged to Shelley Unitt. She is a lesbian so doesn’t have a husband. In March 2020, she announced her engagement to long-term partner Shelley Unitt. Scott owns Boxx2Boxx coffee, a coffee shop in Manchester. In June 2012, Scott was named in an 18–player Great Britain squad for the 2012 London Olympics. In 2021, Scott was announced as one of the 22-player squads for the 2020 Tokyo Olympics. As of mid-2022, Jill Scott is set to marry her partner Shelley Unitt. She stands at an appealing height of 1.81m and has a good body weight which suits her personality.

How much is Jill Scott worth? Jill Scott footballer net worth is estimated at around $4 million. Her main source of income is from her career as a football player. Jill Scott’s salary per month and other career earnings are over $450,000 annually. Her successful career has earned her some luxurious lifestyles and fancy car trips. She is one of the richest and most influential female football players in the United Kingdom.