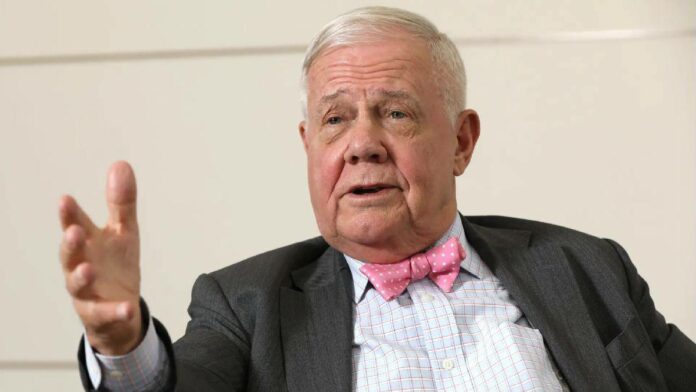 Jim Rogers is an American investor and financial commentator based in Singapore. Rogers is the chairman of Beeland Interests, Inc. He was the co-founder of the Quantum Fund and Soros Fund Management. He was also the creator of the Rogers International Commodities Index (RICI). Rogers does not consider himself a member of any school of economic thought, but has acknowledged that his views best fit the label of the Austrian School of economics.

Rogers then acquired a second BA degree in philosophy, politics and economics from the University of Oxford, as a member of Balliol College in 1966. In April 2019, he received an honorary Ph.D. from Pusan National University for his books containing positive messages on Korean reunification.

Jim Rogers joined Dominick & Dominick LLC on Wall Street in 1964, where he first learned about stocks and bonds. From 1966 to 1968, Rogers was in the U.S. Army during the Vietnam War.

Rogers joined investment bank Arnhold and S. Bleichroder in 1970, where he worked with George Soros. In 1973, Soros and Rogers both left and founded the Quantum Fund. From 1973 to 1980, the portfolio gained 4,200% while the S&P advanced about 47%. The Quantum Fund was one of the first truly global funds.

Check Out: Guy Spier net worth

In 1980, Rogers decided to “retire” and traveled on a motorcycle around the world. He has since been a guest professor of finance at the Columbia Business School. In 1985, he said the Vienna Exchange had high potential of being a bull market.

In 1989 and 1990, Jim Rogers was the moderator of WCBS’ The Dreyfus Roundtable and FNN’s The Profit Motive with Jim Rogers. From 1990 to 1992, he traveled through China again and around the world on motorcycle, covering over 100,000 miles (160,000 km) across six continents. His journey was listed in the Guinness Book of World Records. He tells of his adventures and worldwide investments in the bestseller Investment Biker.

Jim Rogers founded the Rogers International Commodity Index in 1998. In 2007, the index and its three sub-indices were linked to exchange-traded notes under the banner ELEMENTS. The notes track the total return of the indices as an accessible way to invest in the index. Rogers is an outspoken advocate of agriculture investments.

Rogers went on another Guinness-recognized journey through 116 countries, covering 245,000 kilometers with his wife Paige Parker in a custom-made Mercedes between January 1, 1999, and January 5, 2002. The trip began in Iceland, which was about to celebrate the millennial anniversary of Leif Eriksson’s first trip to America. On January 5, 2002, the couple returned to their New York home on Riverside Drive. He wrote the bestseller Adventure Capitalist following this around-the-world adventure.

On his return in 2002, Rogers became a regular guest on Fox News’ Cavuto on Business and other financial TV shows. In 2005, Rogers wrote Hot Commodities: How Anyone Can Invest Profitably in the World’s Best Market, in which Rogers quotes a Financial Analysts Journal academic paper co-authored by Yale School of Management professor, Geert Rouwenhorst, entitled Facts and Fantasies about Commodity Futures.

In a CNBC interview with Maria Bartiromo broadcast on May 5, 2008, Rogers said people in China are extremely motivated and driven, and that he wants to be in that type of environment so his daughters are motivated and driven. He added that this is how America and Europe used to be. He chose not to move to Chinese cities like Hong Kong or Shanghai due to high pollution potentially causing health problems for his family. However, he remains skeptical of India’s future, saying in 2001, “India as we know it will not survive another 30 or 40 years”.

In 2008, Jim Rogers endorsed Ron Paul, a Republican congressman, for president of the United States. In September 2012 Rogers was appointed by VTB Capital as an advisor to the agricultural division of its global private equity unit. Rogers noted: “Russia and the CIS region have all the ingredients needed to become the world’s agriculture powerhouse. It seems that everything may now be coming together under VTB Capital to make this happen, so I am keen to participate if the fund gets off the ground.”

Jim Rogers said in 2002 that Fed chairman Alan Greenspan’s “reaction to the stock-market bubble has caused two more bubbles to grow: a real-estate bubble and a consumer-debt bubble.” In 2006, Rogers said he was shorting US financials, home builders and Fannie Mae.

Rogers urged students to scrap career plans for Wall Street or the City, London’s financial district, and to study agriculture and mining instead on November 4, 2010, speaking at Balliol College, Oxford. “The power is shifting again from the financial centers to the producers of real goods. The place to be is in commodities, raw materials, natural resources.”

Check Out: Josh Dubin net worth

In May 2012 Jim Rogers remarked during an interview with Forbes magazine that “there’s going to be a huge shift in American society, American culture, in the places where one is going to get rich. The stockbrokers are going to be driving taxis. The smart ones will learn to drive tractors so they can work for the smart farmers. The farmers are going to be driving Lamborghinis. I’m telling you. You should start Forbes Farming.” Rogers has been periodically bearish on the US stock market since the 1980s, notably 1987, 1998, 1999 & 2008. In February 2018, he reportedly predicted that the next bear market would be “the worst in our lifetime.”

Jim Rogers is currently married to Paige Parker, they had their wedding in 2000. His wife is a board member, patron and fundraiser for various organisations. Rogers has been married three times. In 1966, he married his first wife, Lois Biener; they divorced in 1969. In 1974, he married Jennifer Skolnik; they divorced in 1977. He married Paige Parker in 2000; they have two daughters. However, in February 2013 Rogers joined the board of advisors of the Coalition to Reduce Spending. In September 2015, he left the Indian market saying “one can’t just invest on hope”.

How much is Jim Rogers worth? Jim Rogers net worth is estimated at around $310 million. His main source of income is from his career as an investor and financial commentator. Rogers’s successful career has earned him some luxurious lifestyles and some fancy cars trips. He is one of the richest and most influential people in Singapore.