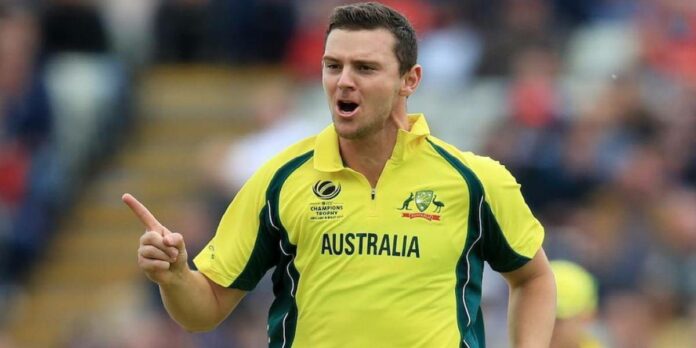 Josh Hazlewood is an Australian international cricketer. He is a tall pace bowler known for his accuracy and has been compared to former Australian paceman Glenn McGrath.

Josh Reginald Hazlewood was born on January 8, 1991 (age 31 years) in Tamworth, Australia. His parents are Trevor Hazlewood and Anne Hazlewood, he has one sister Casey Hillier Hazlewood and a brother Aaron Hazlewood. Josk nicknames are Hoff and Bendemeer Bullet.

Hazlewood was raised in the small country town of Bendemeer, New South Wales, situated 40 km north of Tamworth. He is the younger son of his parents, having an older brother and sister. He would frequently engage with his older brother in fierce backyard cricket matches, and by the age of 12 was already playing for Tamworth against grown men.

Josh Hazlewood was selected for New South Wales at the age of 17, making him the youngest paceman to represent the state. His first-class debut was at the Sydney Cricket Ground against the touring New Zealand side in November 2008. Hazlewood also became the youngest to make his One Day International debut for Australia on 22 June 2010.

A right-arm fast bowler, he has also played for Australia Under-19s and was the youngest member of Australia’s squad for the 2008 Under-19 World Cup.

In the 2020 IPL auction, he was bought by the Chennai Super Kings ahead of the 2020 Indian Premier League.

Josh Hazlewood bowled 7 overs on his One Day International debut and picked up one wicket for 41 runs. He made his T20I debut vs West Indies on 13 February 2013 and picked up 1–36 in 4 overs. He picked career-best figures 4–30 in a T20 vs England.

Hazlewood made his Test match debut for Australia against India at the Brisbane Cricket Ground on 17 December 2014. He took 5 wickets in the first innings, conceding 68 runs. He was a part of the Australian squad for the 2015 ICC Cricket World Cup and played a part in their triumph, picking up 4 wickets against Pakistan in the quarter-finals.

In January 2017, Hazlewood recorded an unusual inning in the first ODI against New Zealand. He had a 26-minute long 54-run tenth wicket partnership with Marcus Stoinis without facing a single ball. He was run out at the non-striker’s end with Australia falling just seven runs short of a win and he became the first player to be dismissed for a diamond duck in a partnership of over fifty runs.

This was Hazlewood’s first ODI dismissal, setting the record for the most ODI matches played without being dismissed (33), a record he had overtaken in December 2016 after his 28th ODI. Hazlewood picked up nine wickets in the Champions Trophy that year while topping the ICC ODI bowlers’ rankings.

Check Out: Mitchell Santner net worth

In April 2018, he was awarded a national contract by Cricket Australia for the 2018–19 season.

On 16 July 2020, Hazlewood was named in a 26-man preliminary squad of players to begin training ahead of a possible tour to England following the COVID-19 pandemic. On 14 August 2020, Cricket Australia confirmed that the fixtures would be taking place, with Hazelwood included in the touring party.

Josh Hazlewood took his 200th Test wicket against India in the first Test of Border–Gavaskar Trophy series 2020-21. He is Australia’s 17th highest Test wicket-taker as of 19 December 2020. In August 2021, Hazlewood was named to Australia’s squad for the 2021 ICC Men’s T20 World Cup.

How much is Josh Hazlewood worth? Josh Hazlewood net worth is estimated at around $5 million. His main source of income is from his career as a Cricketer. Hazlewood successful career has earned him some luxurious lifestyles and some fancy cars. He is one of the richest and influential cricketers in Australia.