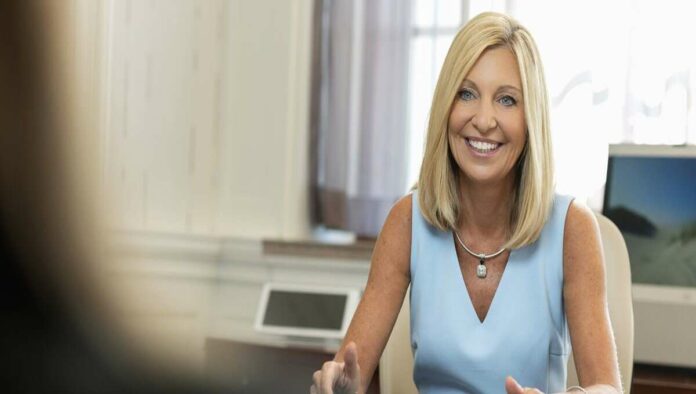 Read about Karen S. Lynch net worth, age, husband, children, height, family, parents, salary and business career as well as other information you need to know.

Karen S. Lynch Rohan was born on December 30, 1963 (age 59 years) in Ware, Massachusetts, United States. Lynch was raised by a single mother. Her mother died by suicide when Karen Lynch was 12 years old. Following her mother’s death, Lynch and her three siblings were raised by their aunt. In Lynch’s early 20s, she lost her aunt to breast cancer, lung cancer, and emphysema.

Lynch attended Ware Junior/Senior High School and graduated in 1980. Lynch attended Carroll School of Management at Boston College, where she received a bachelor’s degree in Accounting and has a Certified Public Accountant (CPA) certification. Upon graduating, she started her financial career in the Boston office of Ernst & Young, where she specialized in insurance.

Karen S. Lynch credits her chosen career path in health care to her family life experiences. She spent nearly a decade in insurance before returning to graduate school to pursue her MBA, saying, “I wanted to broaden my financial background to have more exposure to the business aspects of running a company”.

Check Out: Emma Walmsley net worth

Lynch was appointed president of Cigna Dental in 2004. The following year, she was named to a newly-created position that combines leadership of Cigna Group Insurance and Cigna Dental. She left Cigna in 2009 to become president of Magellan Health Services.

She stayed with Magellan until 2012 when she joined Aetna as executive vice president and head of Specialty Products. Three months after joining Aetna, Lynch led the integration of Coventry Health Care, which was the largest healthcare acquisition at the time.

In 2015, Lynch became Aetna’s first female president, a role she retained through the $70 billion acquisition of Aetna by CVS Health in 2018. During the COVID-19 pandemic, Lynch took the helm as president and chief executive officer of CVS Health on February 1, 2021, following the retirement of Larry Merlo.

The appointment made her the highest-ranking female CEO on the Fortune 500 list and the 40th female chief executive on the Fortune 500 list. Under Lynch’s leadership, CVS Health administered the COVID-19 vaccine in more than 40,000 long-term care facilities and in CVS Pharmacy locations in 50 states, Puerto Rico and Washington, D.C.

Karen S. Lynch was selected for the inaugural 2021 Forbes 50 Over 50, a list of female entrepreneurs, leaders, scientists, and creators who are over the age of 50. She was awarded the 2021 Committee for Economic Development Distinguished Leadership Award, which recognizes business leaders for their contributions.

Check Out: Alison Rose net worth

She served as honorary co-chair of the Komen Connecticut Race for the Cure benefiting breast cancer research. In 2021, she was ranked number one on Fortune’s Most Powerful Women in Business list. Karen Lynch is the recipient of Hunt Scanlon’s 2022 “Excellence in Culture” Award.

How much is Karen S. Lynch worth? Karen S. Lynch net worth is estimated at around $50 million. Her main source of income is from her primary work as a businesswoman and CEO. Karen S. Lynch’s salary per month and other career earnings are over $2.2 million dollars annually. Her remarkable achievements have earned her some luxurious lifestyles and some fancy car trips. She is one of the richest and most influential businesswomen in the United States. Karen S. Lynch stands at an appealing height of 1.71m and has a good body weight which suits her personality.