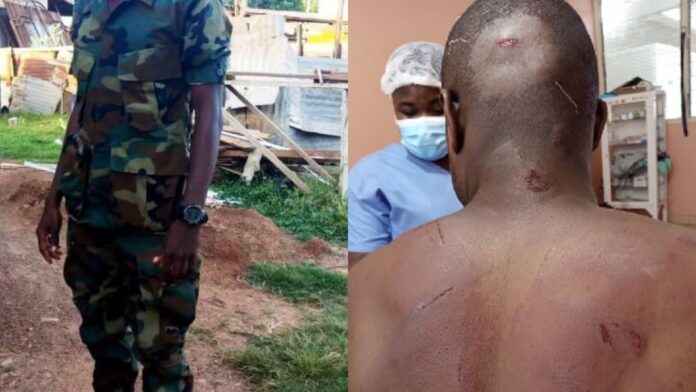 A military man has been attacked by land guards numbering over 30 at Adjen Kotoku in the Ga West Municipal District of the Greater Accra Region Monday, March 8.

According to reports, the heavily armed men invaded the property belonging to the military man at Akotoshie Number1 near ‘Rush Energy Drink’ at around 1pm and demanded to see the owner of the land.

The Machete and gun wielding gang of criminals beat the soldier, inflicted cutlass wounds his head and body, threatened to kill him and equally beat up the labourers working on his land.

Aside the life threatening attack, the land guards further destroyed the windscreens of the vehicle belonging to the soldier which was parked on site.

They went ahead to robbed him of his money – over Seven-Thousand Ghana Cedis (GHC7,000).

No arrest has been made yet even though the Soldier was taken to the hospital for medical care.