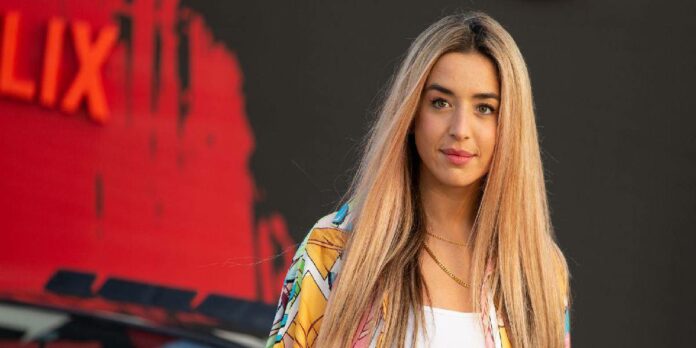 Lola Índigo is a Spanish singer and dancer. She first gained national recognition in 2017, when she placed as sixteenth in series nine of the Spanish reality television talent competition Operación Triunfo. She was one of the first participants to be eliminated from the talent show.

She signed with Universal Music after exiting the show and released her debut single “Ya No Quiero Ná” which turned into a smash-hit in her country, peaking at number three on the PROMUSICAE musical chart and selling more than a hundred thousand copies. It was certified as three times platinum. Her short but intense musical career has earned her multiple awards such as an MTV Europe Music Award for Best Spanish Act in 2019.

Lola Indigo who real name is Miriam Doblas Muñoz was born on April 1, 1992 (age 29 years) in Madrid, Spain. She was raised in Huétor-Tajar, a small town in the province of Granada where she feels native. She became interested in fine arts at an early age, highlighting her facet as a dancer and choreographer. She worked as a dancing teacher and took part in some musicals.

In 2010 she entered the Spanish dance television competition Fama Revolution where she left the fourth to last. Later on, she was also the backup dancer for A-list artists like Chris Brown, Miguel Bosé, Enrique Iglesias, Marta Sánchez, The Baseballs and more outside Spain, most concretely in China, where she lived for three years, and in Los Angeles, where she took singing classes and formed herself more professionally.

She auditioned for Operación Triunfo in July 2017, a music talent television contest that aired in La 1 after a six-year hiatus. The show began in October 2017 and became a media phenomenon in Spain. Its YouTube channel received over 561 million views from October to February 2018 and became the most commented space on Twitter in Spain surpassing Game of Thrones. After it ended, some of the contestants became instant national celebrities.

Lola Indigo entered the musical reality show contest Operación Triunfo in October 2017. She left by the third week where she placed as sixteenth. After she left the contest, she did some concerts in Barcelona and Madrid, where she also played music as an amateur disc jockey. In January 2018 she offered her first official concert at the Sala Prince in Granada which sold out.

She sang OT2017’s hymn “Camina” at the 2018 Premios Forqué in Zaragoza, a professional film and television award, alongside her fellow competitors. Universal Music offered Doblas to form a musical group with three other OT competitors that were meant to be named “Delta”, which she declined after no songs worked for this project. Doblas co-headlined a 23-date arena concert tour with her fifteen talent show companions from March to December 2018.

Check Out: Belinda net worth

The tour, named OT 2017, (en Concierto) was attended by over 300,000 people and visited Spain’s largest indoor arenas and stadiums like the Palau Sant Jordi or the Santiago Bernabéu Stadium. In September 2018 she entered the television competition of celebrity impersonations Tu Cara Me Suena, where she got the fourth position. In December she sang the Coca-Cola’s Christmas campaign jingle “El Mundo Entero” alongside Aitana, Ana Guerra, Raoul Vázquez and Agoney.

In June 2018, Miriam Doblas Muñoz announced her stage name “Lola Índigo”. Lola Índigo, however, was first announced as a supergroup formed by Doblas and four dancers: Mónica Peña, Saydi Lubanzadio, Laura Ruiz y Claudia Riera. This band would mix singing and dancing with a mix of trap, reggaeton and funk. On July 20, 2018, she released her debut single “Ya No Quiero Ná” through Universal Music. The song, produced by Belgian musician Bruno Valverde in Segovia, became an instant hit in Spain thanks to its contagious rhythm and feminist lyrics. It debuted at number three on the PROMUSICAE chart, being this its peak position.

The music video for “Ya No Quiero Ná” had a very low budget; was filmed at the Juan Carlos I park in Madrid with an urban and very careful aesthetic in which dance is the protagonist. It received over a million views in a single day. As of April 2020, the song has been certified three times platinum. Universal Music expanded her single contract in order to release her debut studio album. In November 2018 she embarked on her first solo tour called “Índigo Tour” which began on November 3 in Granada and ended on March 23, 2019, in Toledo comprising 17 concerts. Thus, throughout 2018 she started shaping her debut studio album.

In December she released her second single “Mujer Bruja” which features Mala Rodríguez. The track peaked at number six in Spain. There she announced that her album would have a “witch theme”. That same month she collaborated with multiple artists on the remix of Yera’s “Borracha” and also released the “Ya No Quiero Ná” remix featuring Joey Montana and Charly Black. At the beginning of 2019, she collaborated with Movistar+ and dance television competition Fama a Bailar and sang the theme song “Fuerte” for the show’s 2019 edition.

Lola Indigo also worked there as a regular coach and performed a couple of times. In April she collaborated with Mediaset and sang the main song for the 2019 film Lo Dejo Cuando Quiera, which turned to be “El Humo”. These two songs were both released as promotional singles of her debut album. Later that month, she released “Maldición” featuring Colombian rapper Lalo Ebratt. On 17 May 2019, her album Akelarre (Basque for “witches’ sabbath”) was released after multiple delays. It debuted at the top position of the Spanish charts. Its respective tour began on May 4 at the FIBES Conference Center in Seville and ended on November 30 in Girona comprising 33 concerts.

In June she collaborated with Aitana on her song “Me Quedo” which was released as a single on June 28. On July 31, 2019, Índigo released “Lola Bunny”, a non-album track that features Spanish novel rapper and actual boyfriend Don Patricio. Its upbeat rhythm and fast urban sound earned the song the fourth position on the PROMUSICAE chart. On August 8 she collaborated with Cupido on the remix of their song “Autoestima” which was constantly played by MTV.

In October 2019 Lola Indigo opened two concerts for Colombian megastar Sebastián Yatra in Ecuador and did a showcase in Bogotá. On December 6 she closed the ‘Akelarre’ era with a new song, “Luna”. Lola Índigo will play her first solo arena concert on November 29, 2020, at the WiZink Center in Madrid. The show, titled ‘Akelarre: la Noche de las Brujas’ was scheduled to take place on May 2 but was delayed due to the ongoing coronavirus pandemic.

Lola Indigo released “4 Besos” featuring Rauw Alejandro and Lalo Ebratt on March 27, 2020, the lead single of her second album which is scheduled to be released in late 2020. In May a second collaboration with Mala Rodríguez titled “Problemas” was released as a track on Rodríguez’s sixth studio album Mala. On June 10, the promotional single “Mala Cara” was released on streaming media and performed on the final gala of Operación Triunfo 2020.

During the summer season, Indigo released different collaborations. In July she united with Spanish urban singer Rvfv on “Trendy”, which had its own challenge on TikTok and worked well on the charts. On August 28 her highly anticipated collaboration with Mexican and Chilean singers Danna Paola and Denise Rosenthal titled “Santería” was released online, peaking at 15 on the PROMUSICAE chart and became a top twenty hit in Chile.

Check Out: Karol G net worth

In September, Indigo entered the Billboard Argentina Hot 100 chart for the first time after releasing “High (Remix)” alongside Argentine singers María Becerra and Tini. The track was named “Best Latin Summer Remix of 2020” by Billboard and scored a Premios Gardel nomination for Best Trap/Urban Song or Album. A month later she collaborated with Spanish rapper Beret on “Cómo te Va?” and in November with Belén Aguilera in “La Tirita”.

In July 2021 Lola Indigo released the song “La Chica de la Escuela” with Tini and Belinda, which was born right after the quarantine and created via Zoom reaching the third position in Spanish iTunes charts.

Lola Indigo is currently not married. Her husband or boyfriend is unknown to the general people. However, in August 2021, she did an interview alongside Belinda with the fashion magazine Vanity Teen in which they both talked about the ways music changed their lives, how they faced difficult times while growing up, the joy of helping others and their latest international hit single “La Chica de la Escuela”.

How much is Lola Indigo worth? Lola Indigo net worth is estimated at around $10 million. Her main source of income is from her career as a singer and actress. Indigo successful career has earned her some luxurious lifestyles and some fancy cars trips. She is one of the richest and influential singers in Spain.

09/02/2022
ABOUT US
Our Motive is to provide reliable, accurate and informative news to you. The Urban and Rural at heart ❤️
Contact us: [email protected]
FOLLOW US
© Apumone 2022 All Rights Reserved
Go to mobile version
We use cookies to ensure that we give you the best experience on our website. If you continue to use this site we will assume that you are happy with it.Ok