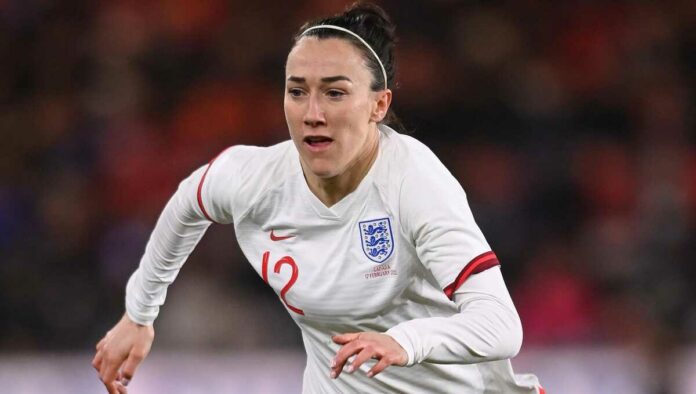 Lucy Bronze is an English professional footballer who plays as a right-back. She is due to join Barcelona from the 2022/23 season. Bronze also plays for the England national team. She has previously played for Sunderland, Everton, Liverpool, Olympique Lyonnais and Manchester City as well as the North Carolina Tar Heels at the college level in the United States. Bronze has won three UEFA Women’s Champions League titles with Olympique Lyonnais as well as three FA Women’s Super League titles with Liverpool and Manchester City.

Bronze represented England at all youth levels before featuring in the full national squad at Euro 2013. She won the Silver Ball at the 2019 FIFA Women’s World Cup in France, helping England to a fourth-place finish, and was named to the All-Star Squad at the 2015 FIFA Women’s World Cup in Canada, in which England finished third. She has won the PFA Women’s Players’ Player of the Year award twice – in 2014 and 2017.

In 2018 and 2020, Bronze was named BBC Women’s Footballer of the Year. In 2019, she became the first English footballer to win the UEFA Women’s Player of the Year Award. Bronze was named The Best FIFA Women’s Player in December 2020. In June 2022 Bronze was included in the England squad which won the UEFA Women’s Euro 2022, winning the ball from a corner to create England’s winning goal by Chlöe Kelly with 10 minutes left of extra time in the Final against Germany. Also in June 2022, Bronze agreed to join Barcelona after her contract with Manchester City expired.

Lucia Roberta Tough Bronze was born on October 28, 1991 (age 30 years) in Berwick-upon-Tweed in the northeast, United Kingdom. She is the daughter of a Portuguese father and an English mother. She has since lived on Lindisfarne, in Belford and in Alnwick. Having studied at the Duchess’s Community High School in Alnwick, she moved to North Carolina to study at UNC. Bronze subsequently moved to Leeds Metropolitan University. Bronze has two siblings: an older brother, Jorge Bronze; and a younger sister, Sophie Bronze who plays youth football for Milton Keynes WFC.

Lucy Bronze played with Alnwick Town A.F.C. to the under-11 level, but F.A. rules prevented her from continuing with the boy’s team. She began playing for Sunderland at the under-12 academy level and joined the senior team when she turned 16 in 2007. She previously captained the under-16 team. In 2007–08, Bronze was named Manager’s Player of the Year as Sunderland finished third in the FA Women’s Premier League Northern Division. The next season she helped them win the Northern Division and gain promotion to the National Division.

Bronze also appeared in the 2009 FA Women’s Cup final, claiming the Player of the Match award in Sunderland’s 2–1 defeat to Arsenal. That summer, Bronze moved to the United States to study at the University of North Carolina at Chapel Hill and play for the North Carolina Tar Heels women’s soccer team, the most successful Division 1 team in the country. She won a scholarship from coach Anson Dorrance after impressing him during several soccer camps. Bronze featured prominently in the midfield for the team, eventually becoming the first British player to win an NCAA Cup in December 2009. All-American honours followed for Bronze, who scored three goals in 24 games. She then returned to Sunderland in the Premier League National Division.

Check Out: Millie Bright net worth

In September 2010 it was revealed that Lucy Bronze had signed for Everton when she was named in their UEFA Women’s Champions League squad. She debuted for Everton in a 0–0 draw against MTK in Hungary but continued to play for Sunderland for the remainder of 2010. At the age of 19, Bronze competed in six matches for Everton during the 2011 FA WSL season. Everton finished in third place during the regular season with a 7–3–4 record. During the 2012 FA WSL, she was a starter in ten of the eleven matches she played. She scored her first Everton goal during a 2–0 win against Liverpool L.F.C. She scored another goal during a 2–2 draw against Arsenal. Everton finished the season in third place with a 7–3–4 record.

Lucy Bronze left Everton in November 2012 to sign for local rivals Liverpool, following Natasha Dowie and Fara Williams who had made the same move days earlier. Bronze was part of the Liverpool side that won the FA WSL in 2013 and again in 2014. During the 2013 FA WSL season, she was a starting defender in 13 of the 14 matches she played.

She scored a goal during the team’s 4–1 win over Birmingham City. Liverpool finished in the first place and conceded only two losses. During the 2014 FA WSL, Bronze started all matches for Liverpool helping lead the team to a first-place finish and 7–2–5 record, conceding only two losses for the second consecutive season. In 2014, Bronze was awarded the PFA Women’s Players’ Player of the Year. Following her second league title, she departed Liverpool to sign for Manchester City.

Lucy Bronze scored two goals from the full-back position, helping City to second place in the league in her first year at Manchester City, meaning they qualified for the UEFA Women’s Champions League for the first time. In 2016, her second season in Manchester, she scored two league goals as the Blues went unbeaten for the entire season. The defender contributed to an outstanding record which saw Manchester City only concede four league goals. Bronze also helped Manchester City to their second FA WSL Cup win in three years, scoring the winning goal in the 105th minute of the final.

Bronze was also named FA WSL 1 Players’ Player of the Year. Bronze played a part in both the home and away leg of Manchester City’s first ever Champions League games, scoring two and assisting two in a 6–0 aggregate win over Russian champions Zvezda Perm. She ended the competition with eight appearances, as Manchester City reached the semi-finals of the 2016–17 edition of the UEFA Women’s Champions League, with their title hopes ended in late April when they lost Olympique Lyonnais a 3–2 on aggregate.

Bronze was named in the Team of the Year for D1 Feminine and Women’s Champions League Squad of the Season. In the Coupe de France, Bronze and Lyon were unable to defend their Coupe de France title, losing to Paris Saint-German in the final. Bronze has been shortlisted for the inaugural Women’s Ballon d’Or award, was one of 10 players nominated for UEFA Women’s Player of the Year Award and The Best FIFA Women’s Player Award, but finished sixth, fifth and sixth respectively.

She made 29 appearances during the 2018-19 season for Lyon in all competitions, scored two goals and collected her second Division 1 Féminine league title winner’s medal; she also won Coupe de France Féminine title and helped Lyon win a second consecutive UEFA Women’s Champions League trophy. Bronze helped Lyon win Trophée des Championnes in 2019 – the first historic new trophy against Paris Saint-Germain. The same year, for her performances in the tournaments, the defender finished as runner-up for the Women’s Ballon d’Or, was named UEFA Women’s Player of the Year Award and finished third in the voting for The Best FIFA Women’s Player Award. At the end of the season, Bronze confirmed that she would be leaving Lyon, following the expiration of her contract. She won nine trophies in three seasons with the club.

On 8 September 2020, Bronze rejoined Manchester City on a two-year deal, following the conclusion of her contract with Olympique Lyonnais, which brought the curtain down on a trophy-laden three-year spell in France. In 2020, after winning a treble with Olympique Lyonnais and for her performances in the tournaments, she was named as the winner of The Best FIFA Women’s Player Award on 17 December 2020, becoming the first defender to win the award and the first English footballer to do so. In June 2022, Bronze agreed to join Barcelona after her contract with Manchester City expired.

Bronze was called into an England under-20 training camp in January 2010. After featuring in all three games during the 2010 FIFA U-20 Women’s World Cup, Bronze made her debut for the England under-23 team in a 2–1 win over Germany in September 2010. She made her debut for the England senior team on 26 June 2013 as a substitute in the 67th minute for Dunia Susi in a friendly against world champions Japan at the Pirelli Stadium in Burton-upon-Trent. She had a claimed goal disallowed in the 89th minute of the 1–1 draw. The following month, she was an unused member of the squad at Euro 2013 in Sweden, a group stage exit.

Lucy Bronze was part of the England squad at the 2015 Women’s World Cup. In the last 16 against Norway in Ottawa, she scored the winning goal from outside the penalty area as England came from behind to win 2–1, their first knock-out win at the World Cup. She also went on to score what proved to be the quarter-final winner against Canada in Vancouver as she netted England’s second from a header in the 14th minute.

Check Out: Jill Scott net worth

In 2019, Bronze was part of the England team that won the SheBelieves Cup in the United States. Later that year, Bronze was selected for England’s World Cup squad. As part of England’s social-media facing squad announcement, her name was announced by former footballer Alex Scott. Lucy Bronze scored during a 3–0 victory over Norway in the quarter-finals of the 2019 FIFA Women’s World Cup. England finished the tournament in fourth place. Bronze ended up winning the tournament’s silver ball, being the second-best player in the tournament.

After the 2019 World Cup, Lucy Bronze played an unfamiliar central midfield role in friendlies against Belgium and Norway, having previously played there in the 2019 SheBelieves Cup, with England manager Phil Neville likening her to Philipp Lahm. Neville said: “We have a two-year period now where playing Lucy in midfield might be one of the risks we take … Pep Guardiola did it with Philip Lahm. He was voted one of the best right-backs, but he put him into midfield.”

Lucy Bronze is not married but is in a relationship with Machester City player Keira Walsh. In June 2022 Bronze was included in the England squad which won the UEFA Women’s Euro 2022, winning the ball from a corner to create England’s winning goal by Chlöe Kelly with 10 minutes left of extra time in the Final against Germany. She stands at an appealing height of 1.72m and has a good body weight which suits her personality. As of mid-2022, Lucy Bronze is not engaged and has no husband or child.

How much is Lucy Bronze worth? Lucy Bronze net worth is estimated at around $5 million. Her main source of income is from her career as a football player. Lucy Bronze’s salary per month and other career earnings are over $500,000 annually. Her successful career has earned her some luxurious lifestyles and fancy car trips. She is one of the richest and most influential female football players in the United Kingdom.