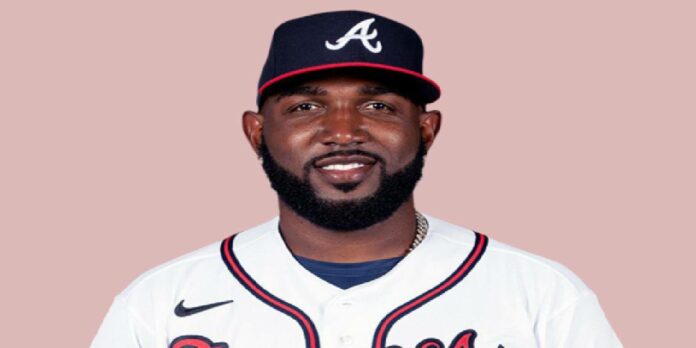 Marcell Ozuna who nicknamed is “The Big Bear” is a Dominican professional baseball outfielder for the Atlanta Braves of Major League Baseball (MLB). He has previously played in MLB for the Miami Marlins and St. Louis Cardinals. He made his MLB debut in 2013 with the Marlins.

Marcell Ozuna Idelfonso was born on November 12, 1990 (age 30 years) in Santo Domingo, Dominican Republic. His father is a former painter, and his mother is a housekeeper. He has one brother and two sisters. He is the cousin of former MLB player Pablo Ozuna.

Marcell Ozuna began 2010 with the Greensboro Grasshoppers of the Class A South Atlantic League but was sidelined after six appearances with an injured wrist. He returned in June with Short Season Jamestown, where he finished the season. In 74 total games, he hit .258 with 22 HR and 62 RBIs. Ozuna spent 2011 with Greensboro, where he hit .266 with 23 home runs, 71 RBIs, and 17 stolen bases over 131 games.

Ozuna was promoted to Jupiter Hammerheads of the Class A-Advanced Florida State League for the 2012 season, wherein 129 games, he hit .266 with 24 home runs and 95 RBIs. That year, he led the Florida State League in home runs, RBIs, runs scored, and total bases. Ozuna was added to the Marlins’ 40-man roster on November 20, 2012. Baseball America rated Ozuna the 75th-best prospect in baseball prior to the 2013 season.

Ozuna opened in 2013 with Jupiter, but after four games, he was promoted to the Jacksonville Suns of the Class AA Southern League. Ozuna was named the league’s player of the week on April 29, 2013. That same day, the Marlins promoted Ozuna to the major leagues following an injury to Giancarlo Stanton.

Marcell Ozuna made his major league debut on April 30, 2013, and recorded his first career hit, a single off Jeremy Hefner of the New York Mets. He hit his first career home run (as well as his first RBI and run scored), a solo home run, off Cole Hamels of the Philadelphia Phillies, in his fifth game. Ozuna was used as the starting right fielder in Stanton’s absence. When Stanton returned, Ozuna became the starting centre fielder.

On July 22, Ozuna was optioned back to Jacksonville. Instead of joining Jacksonville, Ozuna was placed on the 15-day disabled list due to a ligament tear and avulsion fracture in his left thumb, which he injured while making a diving catch. On July 26, 2013, he underwent season-ending thumb surgery.

On July 5, 2015, Ozuna was sent down to AAA after going hitless in nine of ten games, dipping his average to .249 on the season. After playing 33 games and batting .333 with five home runs and 11 RBIs, he returned to the Marlins to complete the 2015 season, batting .278 with six home runs and 18 RBI. However, during the off-season, the Marlins received several offers for him from other teams, but he was back on the roster for the 2016 season and inserted in the number-two spot in the lineup.

Marcell Ozuna established career highs in numerous categories, including batting .312 with 37 home runs and 124 RBI. He was named the NL Player of the Week (along with teammate Giancarlo Stanton once again for the week of September 18–24 after batting .500 (10–20) with three home runs, seven RBIs, and six runs scored.

On December 14, 2017, the Marlins traded Marcell Ozuna to the St. Louis Cardinals for Sandy Alcántara, Magneuris Sierra, Zac Gallen, and Daniel Castano. On January 12, 2018, it was announced that the Cardinals and Ozuna reached an agreement on a one-year, $9 million contract. Prior to the 2018 season, Mike Petriello of MLB.com rated Ozuna the best-left fielder in the major leagues, opining him as “a strong fielder,” and averaging the 12th-highest exit velocity [91 miles per hour (146 km/h)] over the prior three seasons of all hitters with at least 1,000 plate appearances.

On June 2, 2018, Ozuna hit his 100th career home run off Chad Kuhl, in a 3–2 victory versus the Pittsburgh Pirates, and his first home run at Busch Stadium as a member of the Cardinals. The following day, he hit a grand slam in a 5–0 win versus the Pirates.

Ozuna was placed on the injured list on June 29, 2019, with a finger fracture, and was activated on August 3. Over 130 regular-season games and 485 at-bats, Ozuna slashed .243/.330/.804 with 29 home runs and 89 RBIs. With the Cardinals reaching the 2019 National League Division Series, Ozuna played in his first career postseason series. In the five games against the Atlanta Braves, Ozuna hit .429 with 9 hits and 5 RBI.

In 2020 he batted .338/.431/.636 (each 3rd in the NL) with an NL-leading 18 home runs, 56 RBIs, and 145 total bases during the shortened 60-game season. Ozuna won his second Silver Slugger Award after the 2020 season; it was the first-ever Silver Slugger for a designated hitter in the National League as a result of the universal DH rule implemented league-wide during the COVID-19 pandemic-shortened 2020 season.

Marcell Ozuna is married to his longtime girlfriend Genesis Guzman, their wedding was a private one. Ozuna and his wife Genesis have has three children. However, on May 29, 2021, Ozuna was arrested and charged with aggravated assault by strangulation and battery after police allegedly witnessed him grabbing his wife Genesis Guzman by the neck and throwing her against a wall.

How much is Marcell Ozuna worth? Marcell Ozuna net worth is estimated at around $10 million. His salary is around $700,000 and his main source of income is from his career as a baseball player. Ozuna’s successful career has earned him some luxurious lifestyles and some fancy cars. He is one of the richest baseball players in the Dominican Republic. However, on February 5, 2021, Ozuna re-signed with the Atlanta Braves with a four-year, $64 million, deal.

21/06/2021
Read the complete write-up of Marisa Drummond net worth, age, height, movies and TV shows, husband, children as well as other information you need...

How Will A Car Accident Lawyer In Orange County Help Me...

15/08/2021
ABOUT US
Our Motive is to provide reliable, accurate and timely news to you. We're social, connect with us: The Urban and Rural at heart ❤️
Contact us: [email protected]
FOLLOW US
© Apumone 2021 All Rights Reserved