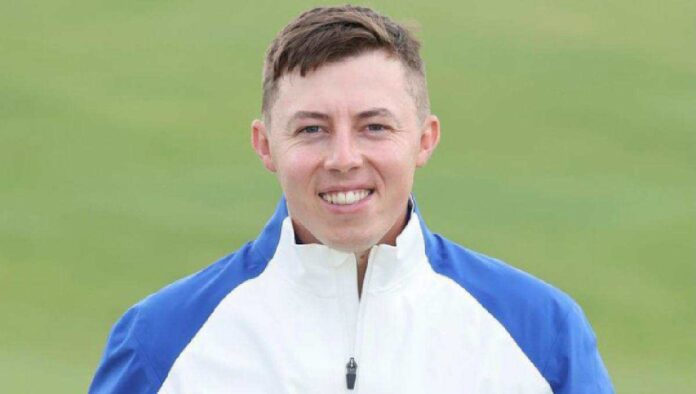 Matt Fitzpatrick is an English professional golfer. His biggest achievement as an amateur was winning the 2013 U.S. Amateur. His first professional win was in the 2015 British Masters. Fitzpatrick’s caddy is Billy Foster.

Matthew Thomas Fitzpatrick was born on September 1, 1994 (age 27 years) in Sheffield and attended Tapton School where he sat A-levels in 2013. He is a keen football fan and a lifelong supporter of local club Sheffield United. He is the son of Russel Fitzpatrick and Susan Fitzpatrick. His younger brother Alex Fitzpatrick is an amateur golfer attending Wake Forest University in North Carolina. Alex played in the 2019 Walker Cup.

Fitzpatrick won the 2012 Boys Amateur Championship at Notts Golf Club (Hollinwell). He made the cut at the 2013 Open Championship and finished as a low amateur, winning The Silver Medal. Fitzpatrick and Jimmy Mullen were the only amateurs to make the cut, with Fitzpatrick finishing on 294 to Mullen’s 299.

In September 2013 he played in the Walker Cup. Also in September 2013, Fitzpatrick enrolled at Northwestern University to play college golf with the Northwestern Wildcats; however, he left after one quarter, in January 2014, to pursue a full-time amateur golf career.

Matt Fitzpatrick turned professional after the 2014 U.S. Open, forfeiting his exemption to the 2014 Open Championship. His professional debut was at 2014 Irish Open, after which he played several competitions on the European Tour and Challenge Tour on sponsor and tournament invitations.

Fitzpatrick entered the 2014 European Tour Qualifying School in November 2014 where he finished in 11th place and qualified for the 2015 European Tour.

Check Out: Shane Lowry net worth

He started the 2015 season missing six cuts in the first eight competitions on the season; in June, he registered a third place at the Lyoness Open quickly followed, in July 2015, by second place at the Omega European Masters a shot behind Danny Willett, winning the second prize of €300,000.

His maiden victory came in October 2015, when he won the British Masters at Woburn, winning the first prize of £500,000 (€671,550). After this result, he entered the world’s top 100 for the first time with a ranking of 59. He finished his rookie season on tour with one win, nine top-10 placements, and a 12th place in the final Order of Merit.

In April 2016, Matt Fitzpatrick competed at the 2016 Masters Tournament, finishing tied for the 7th place; in June, he won the 2016 Nordea Masters and reached the 32nd place in the Official World Golf Ranking, his best position to date. Thanks to his results on the 2015 and 2016 seasons of the European Tour he obtained an automatic selection for the 2016 Ryder Cup.

Matt Fitzpatrick won the DP World Tour Championship, Dubai by one shot over Tyrrell Hatton in November 2016. This was the third and biggest win of his career.

Check Out: Tommy Fleetwood net worth

In September 2021, Matt Fitzpatrick played on the European team in the 2021 Ryder Cup at Whistling Straits in Kohler, Wisconsin. The U.S. team won 19–9 and Fitzpatrick went 0–3–0 including a loss in his Sunday singles match against Daniel Berger. Three weeks later, Fitzpatrick won the Estrella Damm N.A. Andalucía Masters at Real Club Valderrama.

Matt Fitzpatrick has been playing professionally since 2014. He has 7 major professional wins as of May 2022. In April 2016, he had his highest ranking at 32. Fitzpatrick is currently on PGA Tour and European Tour. In May 2022, he participated in the Charles Schwab Challenge tournament.

Matt Fitzpatrick is married to Lydia Cassada, they had their wedding in the United States. His wife Lydia Cassada is an American who was born and raised in Milton, Georgia. Cassada was a student-athlete who played lacrosse in college before graduating in 2017. However, we are yet to confirm how they met and the exact date they got married. As of 2022, even though the golfer and his pretty wife have been together for quite some time now, they have no kids together as far as the media is concerned.

How much is Matt Fitzpatrick worth? Matt Fitzpatrick net worth is estimated at around $5 million. His main source of income is from his career as a professional golfer. His career earnings are over $2.2 million annually. Fitzpatrick successful career has earned him some luxurious lifestyles and some fancy car trips. He is one of the richest and influential golfers in the United Kingdom.