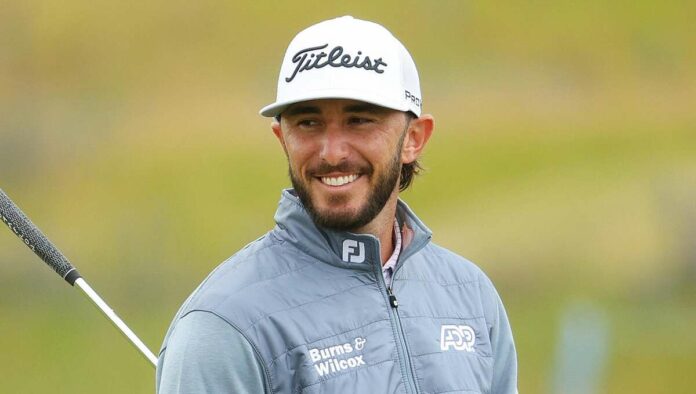 Read about Max Homa net worth, age, wife, children, height, family, parents, salary, and career earnings as well as other information you need to know.

John Maxwell Homa was born on November 19, 1990 (age 32 years) in Burbank, California, United States. He is Jewish and the son of John Homa, and Bonnie Milstein. In December 2018, he tweeted: “Despite 6 years of Hebrew school and the completion of my Bar Mitzvah, the most Jewish I’ve ever felt came after looking at a home with extravagant Christmas lights and immediately thinking “that electric bill must be brutal”. In November 2019, he married Lacey Croom, and the couple lives in Scottsdale, Arizona with their dog, Scotty.

Homa attended Valencia High School in the Santa Clarita Valley. There, he was a four-time first-team All-Foothill League selection, and 2009 Foothill League MVP, graduating in 2009. He then played college golf at the University of California, Berkeley on scholarship, earning a degree in Consumer Behavior. There, as a junior in 2011-12 Homa was a third-team PING Division I All-American and second-team All-Pac-12 and PING Division I All-West Region.

As a senior in 2012-13 Max Homa was ranked No. 19 nationally by Golfweek (5/19) and No. 22 according by Golfstat (5/21), was first-team All-Pac-12, ranked No. 17 on the final Palmer Cup Ranking, and won the Pac-12 Championship with an opening-round nine-under par 61 breaking the course record at the North Course at Los Angeles Country Club and tying for the lowest round posted in the U.S. He was named a first-team All-American and to the All-Nicklaus Team by the Golf Coaches Association of America.

In 2008, Homa was selected to represent Southern California on the Junior America’s Cup team. In 2009, he won the Ventura County Junior Golf Association Robinson Ranch (72-73=145). In 2010, he reached the quarterfinals of the U.S. Amateur before losing to reigning champion and Cal teammate An Byeong-hun. Homa ended the year ranked 4th in California, 33rd in the U.S., and 78th in the world according to amateurgolf.com.

Max Homa finished T-9 at the Frys.com Open in October 2013, his first PGA Tour event as a pro. In December 2013, he tied for 6th place in the Web.com Tour qualifying school. In May 2014, he earned his first professional win at the Web.com Tour’s BMW Charity Pro-Am, defeating fellow rookie Jonathan Randolph by one stroke, earning $117,000.

Check Out: Xander Schauffele net worth

Homa finished 17th on the Web.com Tour regular-season money list, to earn his PGA Tour card for the 2014–15 season. In the 2015 PGA Tour season, Homa entered 27 events. He made 12 cuts and won $380,339. He finished 163rd in the FedEx Cup standings and lost his tour card. In the 2016 Web.com Tour season, Homa won the Rust-Oleum Championship in Ivanhoe, Illinois, coming from seven shots back, and ultimately regained his PGA Tour Card for the 2016–17 season.

In the 2017 PGA Tour season, Max Homa made only two cuts in 17 events and lost his card. That year he made just $18,008. In 2017 he tweeted: “Had a few caddies hit me up recently hoping to team up. They heard they usually get weekends off which is apparently a great selling point.” In the 2018 Web.com Tour season, Homa regained his PGA Tour card for the 2019 PGA Tour season.

Max Homa won the Wells Fargo Championship on May 5, 2019, for his first PGA Tour victory, with a three-shot victory over Joel Dahmen. Homa received $1.422 million for his win, a two-year extension of his PGA Tour card, as well as spots in the PGA Championship and in the 2020 Masters Tournament. On February 21, 2021, Homa earned his second PGA Tour victory at the Genesis Invitational in a playoff over Tony Finau.

In September 2021, Max Homa won his third PGA Tour title at the Fortinet Championship, the opening event of the 2021–22 season. In May 2022, Homa won the Wells Fargo Championship for a second time. He ended the season finishing in a tie for 5th at the Tour Championship. In September 2022, he successfully defended the Fortinet Championship, chipping in for a birdie on the final hole to beat Danny Willett by one stroke. He was selected to play on the U.S. team in the 2022 Presidents Cup; he won all four of the matches he played.

Max Homa is married to Lacey Croom, they had their wedding in the US. His wife is a real estate agent and California Licensed Real-Estate Appraiser & Licensed Realtor. Mrs. Homa has worked as a real estate agent for a couple of years. The couple announced in 2022 that they are expecting their first child, a daughter. His wife Lacey holds a Bachelor of Arts in Communication from California State University, achieving the honor in 2013, the same year Max turned professional. As of January 2023, Max Homa and his wife Lacey Croom are still married.

How much is Max Homa worth? Max Homa net worth is estimated at around $5 million. His main source of income is from his primary work as a professional golfer. Max Homa’s salary per month and other career earnings are over $600,000 dollars annually. His remarkable achievements have earned him some luxurious lifestyles and some fancy car trips. He is one of the richest and most influential professional golfers in the United States. Max Homa stands at an appealing height of 1.85m and has a good body weight which suits his personality.