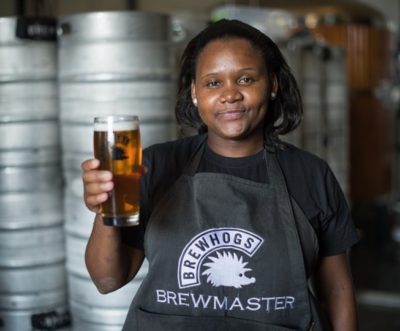 We bring you the first Black woman to head a world largest brew company, Natalie Johnson.

Since the wake of the murder of George Floyd and the ensuing unrests and protests in many cities across the United States, there have been concerns expressed in corporate America about lack of diversity and low investment in Black talent.

Since then, several firms have implemented wide-ranging diversity reform policies and programs and also invested in Black talents. Another company that is also charting a new course is the brewery giant Anheuser-Busch, which has brands including Budweiser and Bud Light.

The company has been in existence for nearly 200 hundred years but had never appointed a senior Black female official until recently when it appointed Natalie Johnson as senior brewmaster, making her the first Black woman to be appointed a brewmaster for the beer brand.

Natalie Johnson is a native of St. Louis and according to her, Anheuser-Busch, which is said to be the world’s largest beer company, has strong ties with her community. Before college, she interned with the company through Inroads. She then became involved in the production activities of the company. Through the internship, she acquired lab experience which helped her in college as a science student.

After college, she was hired by Anheuser-Busch where she learned brewing processes and how to conduct her own analysis. She told POPSUGAR in October that as a brewmaster, the “goal is to make sure, regardless of where you have a beer, what brewery it’s produced at, that it smells the same, it tastes the same, and has the same mouthfeel and finish, regardless of which brewery. So the brewmaster’s role is all about process control.”

Johnson’s journey in a field that is white and male-dominated has not been smooth sailing. “This is certainly a male-dominated field—110 percent,” Johnson told St.Louis. “Not only are women in the minority, but Black people are in the minority, too. In a lot of cases, I was an unexpected rarity in the situation. At times, people were shocked by me, and in some situations, I had to showcase my knowledge and talent before they could fully recognize me for who I am.”

41-year-old Natalie Johnson is now hoping to help address the lack of diversity in the industry through her position in the company as well as the “Budweiser Natalie Johnson Scholarship”. The million-dollar scholarship fund named in her honour was created to provide opportunities for women of colour to pursue STEM degrees. Anheuser-Busch partnered with Dwyane Wade and the United Negro College Fund to create the scholarship fund.

Johnson believes a career path in the brewery sector for women of colour is possible and has advised other Black women who are interested in the brewing industry to pursue it. “Throughout my career, there haven’t been a lot of Black women,” Johnson said in an interview with St. Louis Post-Dispatch this month. “We do want more diversity, not only at Anheuser-Busch but also in the brewing industry.”