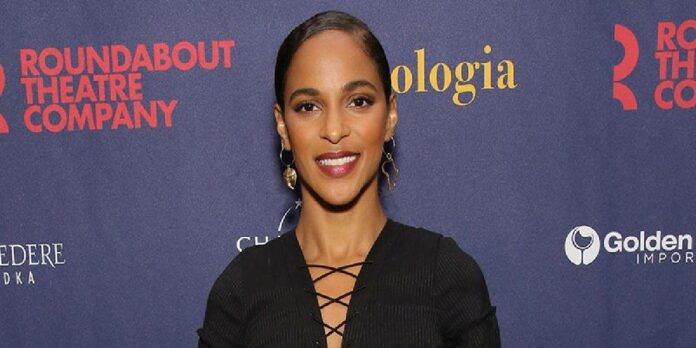 Ebubennem Megalyn Ann Echikunwoke, also known as Megalyn E.K. is an American actress, known primarily for her roles in television and film. She was discovered while performing in a theatrical production for an arts academy and began working professionally at age 15, appearing in an episode of The Steve Harvey Show. Between 2001 and 2002, she starred as Nicole Palmer, daughter of David Palmer, on the Fox series 24, followed by guest roles on ER and Buffy the Vampire Slayer.

Her film roles in the early 2010s include Whit Stillman’s Damsels in Distress (2011), and the action sequel A Good Day to Die Hard (2013). In 2016, she portrayed Mari McCabe / Vixen in the Arrowverse. The following year, Echikunwoke had a supporting role in CHiPs (2017), followed by the independent comedy An Actor Prepares (2018). Next, she co-starred in the comedy Night School (2018). In late 2018, Echikunwoke made her New York stage debut in an off-Broadway production of Apologia.

Ebubennem Megalyn Ann Echikunwoke was born on January 5, 1986 (age 36 years) in Spokane, Washington, United States. She is the daughter of Mark Onigwe Versato Echikunwoke, an Igbo Nigerian father, and Anita Laurie. Her father, an immigrant to the United States, was a survivor of the Nigerian Civil War, during which he suffered gunshot wounds that resulted in him contracting hepatitis B.

When Echikunwoke was four years old, her father, then studying for a law degree in Spokane, died of liver cancer, stemming from gunshot wounds and hepatitis B. Her mother moved to the Navajo Nation, where she raised Echikunwoke and her siblings in the unincorporated community of Chinle, Arizona. At age 14, Echikunwoke was discovered while performing in a theatre production at an arts academy summer camp.

Megalyn Echikunwoke’s first featured role was a guest appearance on The Steve Harvey Show in 1998. The following year, she had her first film role in Julie Dash’s Funny Valentines. In 2001, Echikunwoke starred in a lead role on the MTV soap opera, Spyder Games, as Cherish Pardee, a coffee house singer, ran through the year.

She subsequently had a recurring role in the first season of 24 (2001–2002) as David Palmer’s daughter, Nicole. Beginning in 2003, she appeared as Danika on the comedy series Like Family, and guest-starred on Buffy the Vampire Slayer, appearing in the episode “The Killer in Me” (2003). This was followed by a guest role on Veronica Mars in 2004.

Between 2004 and 2005, Echikunwoke appeared on Fox’s That ’70s Show as Steven Hyde’s half-sister, Angie Barnett. In 2006, she was cast as a series regular on the science fiction television series The 4400, as the adult version of the mysterious Isabelle Tyler. Echikunwoke left the show in 2007. From 2008 to 2009, she appeared in season 7 of CSI: Miami, Echikunwoke joined the cast as the new medical examiner, Dr Tara Price.

She had a recurring role on TNT’s Raising the Bar (2008–2009) where she played the love interest of attorney Marcus McGrath, played by J. August Richards. Also in 2008, Echikunwoke appeared as a singer in the Leonard Chess biopic Who Do You Love?. In 2011, Echikunwoke played Holly in the fourth season of 90210 and subsequently appeared in the comedy film Damsels in Distress.

Megalyn Echikunwoke played April on Showtime’s House of Lies (2012) and Riley Parker in the legal drama Made in Jersey (also 2012) on CBS. In 2014, she co-starred in the drama series Mind Games on ABC.

In 2016, Echikunwoke appeared on the CW’s Arrow as the DC Comics superhero Mari McCabe / Vixen for an episode, as well as providing her voice for the character in the CW Seed animated series Vixen. Due to prior commitments, she was unavailable to play the character in Legends of Tomorrow, resulting in the introduction of a new Vixen played by Maisie Richardson-Sellers, who is the time-displaced grandmother of Echikunwoke’s character.

Check Out: Jason Statham net worth

She played the role of Claire in the off-Broadway production of Apologia for the Roundabout Theatre Company. The play ran from October 16, 2018, to December 16, 2018. In 2019, she had a supporting role in Late Night.

She was subsequently cast in the main role on Almost Family, a drama series on Fox chronicling three women who find they are siblings after a prominent fertility doctor reveals he has used his own sperm to father over 100 children with his patients. The series was cancelled after one season.

Megalyn Echikunwoke is currently single and not married. Her boyfriend or husband is unknown to the general people. However, in 2007, Echikunwoke, Justin Long, Olivia Wilde, and Kal Penn campaigned for the 2008 Democratic Presidential nominee Barack Obama. This included a winter tour of college campuses and bars in Iowa, known as the All-Actor All-Iowa All-Star Voter Education Tour, to register new college-age voters prior to the 2008 election. Her cousin is athlete Annette Echikunwoke.

How much is Megalyn Echikunwoke worth? Megalyn Echikunwoke net worth is estimated at around $4 million. Her main source of income is from her career as an actress. Echikunwoke successful career has earned her some luxurious lifestyles and some fancy cars trips. She is one of the richest and influential actresses in the United States.