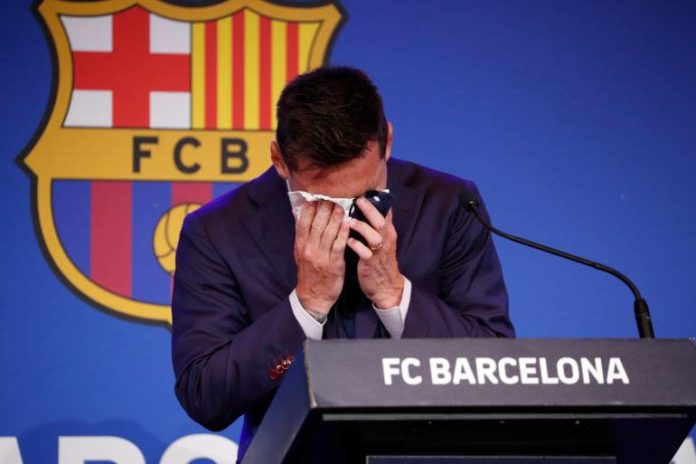 Lionel Messi fought back tears as he began a press conference at which he confirmed he is leaving Barcelona, the football club where he has played his entire career.

He was emotional before he even made an opening statement.

“These recent days, I’ve been giving lots of thought about what I could say, and the truth is that I can’t think of anything,” Messi told a news conference as hundreds of fans, many wearing his number 10 jersey, massed outside Barca’s Camp Nou stadium to bid farewell to the player.

“This is really difficult for me after so many years, being here my entire life, I’m not ready for this and honestly last year with all the nonsense, I was convinced I knew what I wanted to say but this year is not the same.”

Last year he asked to leave the club but changed his mind. This time he came to an agreement to stay but financial stumbling blocks at Barca meant La Liga would not allow the deal.

He is out of contract and will leave for free, with Messi, six times a Ballon d’Or winner, saying a Paris Saint-Germain move is now “possible” but that he has no final agreement with anyone at present.

“My family and I were convinced I wanted to stay here, that’s what we all wanted more than anything. We thought we’d be staying here in Barcelona, today I have to say goodbye to all of this,” he said.

“We’ve always made this our home, we’re at home and we thought we’d be staying here in Barcelona.”

The 34-year-old has been at Barcelona for 21 years and became its all-time top goalscorer with 682.

“I’ve been here so many years, my entire life since I was 13. After 21 years, I’m leaving with my wife, my three little Catalan-Argentine kids, and I can’t tell you we won’t come back because this is my home, and I promised my children that.

“I tried to behave with humility and respect, and I hope that is what remains of me when I leave the club.

Messi said that he believed he would be staying at the club, with a five-year deal agreed on a 50 percent pay-cut, only for a surprise u-turn to happen late last week.

All 35 trophies he won during his time at the club were laid out for what the club described would be a private photo session after the news conference.

Greatest Applause
Of
All
Time pic.twitter.com/YoJt8nkTZc