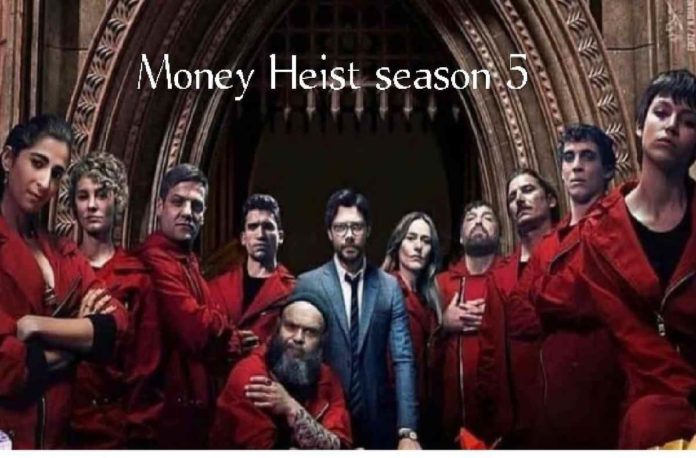 Read the complete write-up of Money Heist season 5, release date, casts, producer as well as other information you need to know.

The series traces two long-prepared heists led by the Professor (Álvaro Morte), one on the Royal Mint of Spain, and one on the Bank of Spain.

The narrative is told in a real-time-like fashion and relies on flashbacks, time-jumps, hidden character motivations, and an unreliable narrator for complexity.

The series subverts the heist genre by being told from the perspective of a woman, Tokyo (Úrsula Corberó), and having a strong Spanish identity, where emotional dynamics offset the perfect strategic crime.

Netflix has released a clutch of first-look stills from the fifth and final season of La Casa de Papel, better known in the English-speaking world as Money Heist.

Keep scrolling to take a closer look at the images from the hit Spanish series, which was created by Alex Pina and produced by Vancouver Media. During the show’s curtain call, the crew of criminals reach the denouement of the greatest heist in history.

Here’s the logline for Season 5: “The gang has been shut in the Bank of Spain for over 100 hours. They have managed to rescue Lisbon, but their darkest moment is upon them after losing one of their own. The Professor has been captured by Sierra and, for the first time, doesn’t have an escape plan.

According to Netflix, Money Heist season 5 will be released in September 2021. It will be available on Netflix and it affliate partners. However, Season 4 of Money Heist was watched by 65 million households in its first 28 days on Netflix last year.

20/06/2021
Read the complete write-up of Camidoh net worth, biography, age, height, songs, record label as well as other information you need to know. Introduction Camidoh is a...

11/11/2021
ABOUT US
Our Motive is to provide reliable, accurate and informative news to you. The Urban and Rural at heart ❤️
Contact us: [email protected]
FOLLOW US
© Apumone 2022 All Rights Reserved