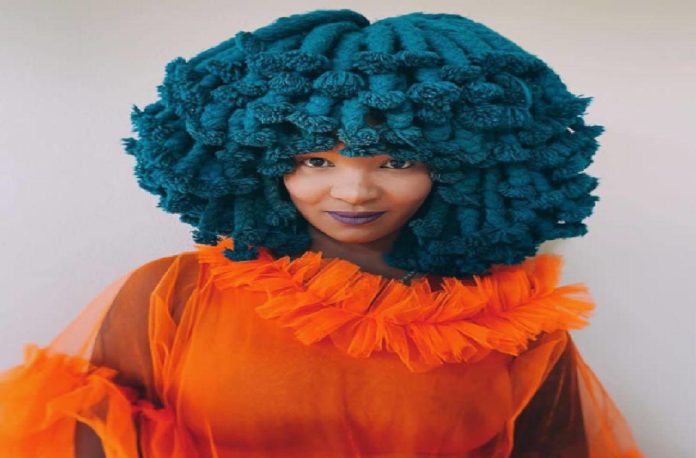 Read the complete write-up of Moonchild Sanelly net worth, biography, age, height, songs, girlfriend, daughters as well as other information you need to know.

Moonchild Sanelly is a South African musician and dancer. She is known for her signature blue-colored hair and her self-created music genre called “Future ghetto punk”.

The singer first came into limelight in the Durban poetry and music scene before relocating to Johannesburg, where she has continued her musical career. Her music has reached audiences beyond South Africa’s borders, playing in festivals such as SXSW in Austin, Texas and Primavera Sound in Barcelona.

She was born into a musical family, with her brother being a hip hop producer, her mother a jazz singer, and her cousins kwaito dancers.

She moved to Durban in 2005 to study fashion at the Linea Fashion Design Academy and stayed there for six years.

Sanelly started performing in shows at Durban University of Technology with a key focus in poetry and hip hop, although she didn’t actually call herself a poet for a long time until seeing people react.

She featured regularly on a weekend show on Gagasi FM, called Poetry with King Siso. Red Bull discovered her music through an EP she was featured on with DJ Shimza, which was eventually a part of the Soul Candi album.

In August 2018, she went on a European tour with South African hip hop group Die Antwoord. Her music fuses elements of experimental electronic, afro-punk and edgy-pop with hints of her strong kwaito, hip hop and jazz background.

In 2019, Sanelly was featured on Beyonce’s The Lion King: The Gift album in the song “My Power” along with Busiswa and Nija. Towards the end of 2019, she dropped her 4 tracks mini album project which she named Nude EP.

She made a notable contribution on Our Culture, first track off Zingah’s 2020 album.

In 2020, she was also featured on JazziDisciples album, 0303 in the song “Askies” and later in “With Love to an Ex”, from Gorillaz’ seventh studio album Song Machine, Season One: Strange Timez.

Moonchild Sanelly is seen as a sex figure and has never been scared to flaunt her body or speak about sex. She gives out sex advice on Valentine’s Day through her social media accounts. In an interview with Basha Uhuru, she called herself “the president of female orgasm”.

Moonchild Sanelly has her on own clothing label called Moonchild Cultwear. She owns a Naked Club and has made it clear that it is not a brothel.

Sanelly is a mother to three daughters. She was a victim of rape twice in her life, once by her uncle. Sanelly is Xhosa and uses the Xhosa language in her songs. However, she is currently in a relationship with Gontse, she is also a female.

How much is Moonchild Sanelly worth? Moonchild Sanelly net worth is estimated at around $700,000 as 2022. Which is approximately R9.6 million South African Rands. Her main source of income is from her music career. She is regarded as one the best female dancers in SA.